September 15, 2018, 12:12 AM · Universal's Halloween Horror Nights kicked off its 2018 season tonight at Universal Studios Florida in Orlando and Universal Studios Hollywood in California. The most anticipated part? Universal's first maze based on the Netflix's breakout hit, Stranger Things.

We are in Hollywood this year for Horror Nights, following our coverage of the Orlando event last year. Both coasts are offering mazes/houses this year based on Stranger Things, Poltergeist, Halloween 4, Trick 'r Treat, and Blumhouse properties, with Hollywood also splitting out The First Purge into its own maze and devoting another to the classic Universal Monsters, while Orlando does its usual run of several original houses.

After once through each maze on their opening night, here is my initial ranking of the Hollywood mazes. Keep in mind, as always, that YMMV, especially as the cast of this most amazing theater production gets more run-throughs over the next month and a half. The videos are highlights from selected houses rather than full walk-throughs, which Universal requested us not to post. But we got ya the good stuff.

As someone who grew up in Indiana in the 1980s and adores Stranger Things in large part for its pitch-perfect depiction of that time and place, I was thrilled that John Murdy and his team at Universal so faithfully recreated the stunning production design of the Netflix series. Based on Season 1 of the show, this maze hits the big story beats, with the Demogorgon taking a more active role as the bogeyman scaring us from scene to scene. The studio granted Halloween Horror Nights the use of a soundstage for this installation, and the creative team made full use of it, employing not just effective stage decoration in their depiction of the Hawkins Lab gateway and the Upside Down, but in the use of immersive and richly detailed sound design that makes the largely unseen children feel ever-present.

Poltergeist also calls back to 1980s white, middle-class suburbia, and Universal's maze also excels with its production design, bringing us into the haunted tract house from Tobe Hooper's 1982 thriller. The iconic "they're here" scene opens the maze, which concludes with Mr. Incredible's almost-as-over-the-top declaration that "you never moved the graves - you only moved the headstones!"

An anthology film, such as Michael Dougherty's 2007 production, lends itself well to a maze treatment, which demands a series of great set pieces. Sam pushes us from scene to scene, which is all fun, but a little disappointing in that I wish I could hit the pause button to linger with some of the detail in each scene, like a horror fan spending the evening with this film on DVD.

Hollywood's one "original" maze allows it us to enjoy the foundational villains who never ought to go missing at a Universal Studios theme park, regardless of season. The operation here is a bit off, with an early break between maze structures that left me wondering if I'd just walked through the park's shortest and lamest maze. We actually took a wrong turn later, too. But the scenes in between made up for those miscues, with amazing set design framing the characters than made Universal Studios. The top four mazes here each impressed me enough that I considered them for the top spot. On a different night, with different timing, I imagine that I might shift them on future viewings.

5. Halloween 4: The Return of Michael Myers 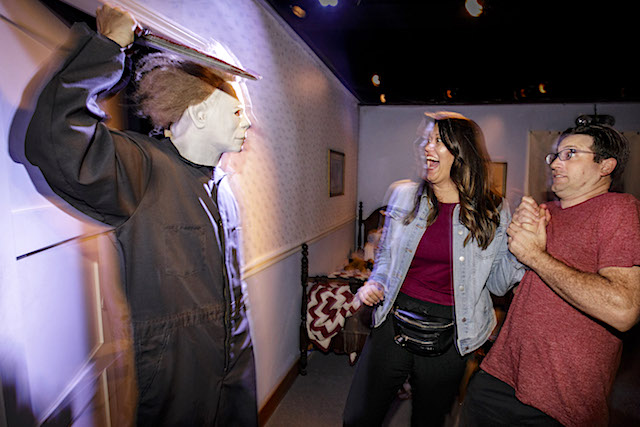 Okay, this is the trance house of 2018 — just one beat, repeated again and again and again. But that one beat is Michael Myers with the jump scare, which is the horror equivalent of Kobe driving to the hoop. It's old school. It's played out. But it's perfect, and LA fans could watch that stuff all night.

6. The Horrors of Blumhouse: Chapter Two 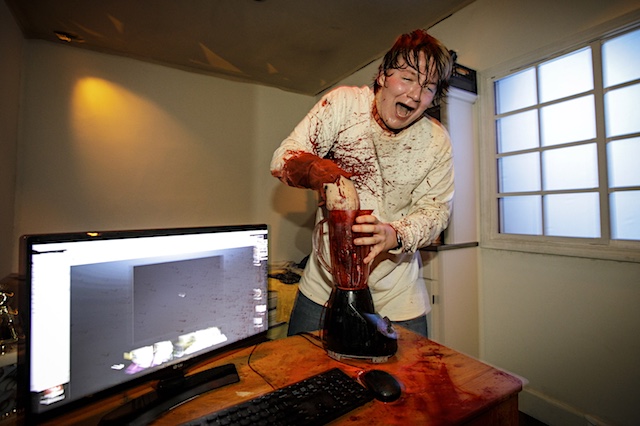 This year's installation features two films, Truth or Dare and Unfriended. I'm rarely a fan of houses that mash together unrelated stories, and Blumhouse 2 suffers the same problems with inconsistency. That these scenes also have to compete with so many iconic set pieces from HHN's other houses doesn't help make this maze any more memorable, either. 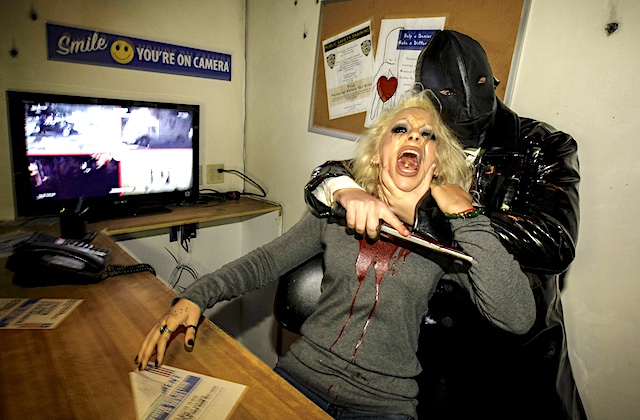 Okay, these last two were a toss-up for me. The Purge worked so well as a scare zone in Orlando last year. But the maze version left me, well, meh. I appreciate some of the scenery here, but the experience never came alive like the scare zone did. But as a result, I am tapping this as the maze most likely to improve over the course of the event. Check back in a couple weeks.

Halloween Horror Nights also includes the year-round The Walking Dead maze, the Terror Tram featuring Hollywood Harry’s Dreadtime Storiez, and the dance troupe Jabbawockeez. Wait-times on a sold-out opening night varied between 60-100 minutes for most mazes between 7 and 10pm, except for Stranger Things, which rocketed to 120 minutes and stayed there. 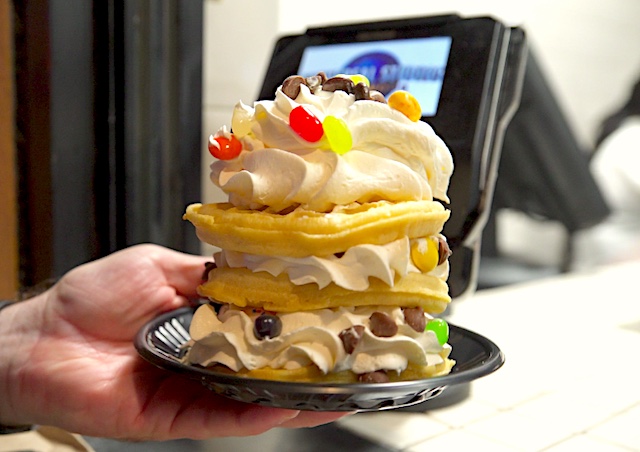 We also helped ourselves to Eleven's EGGO Extravaganza, which cost — wait for it, no, guess — $11.

Heaped with whipped cream and the remnants of a psychokinetically blasted candy aisle, this monstrosity could appeal only to someone who had spent her life in an sensory deprivation chamber and now wanted to make up for lost time by tasting all the things at once.

That Stranger Things' Eleven adored Eggo waffles was supposed to suggest an innocent youngster so deprived that she would actually find frozen waffles tasty. But these are Season 2 waffles, when Eleven has moved on to stress-eating like a girl caught between the virtual and literal hellmouths of puberty and the Upside Down. So bring out the whipped cream, the chocolate chips, the lime and cinnamon jelly beans, and the Reese's Pieces, and let's chow down.

This isn't gliding the lily. It's electroplating a dandelion, encrusting it with rhinestones, and bringing in Joy Mangano to hawk it on QVC. I ate it like people watch accident scenes at the end of the traffic jam. You know you should quit and move on, but you can't help yourself.

For the sake of my taste buds and my self-esteem, here's hoping the Stranger Things kids discover Noble Roman's breadsticks and cheese at the Hawkins Mall in Season 3, in time for next year's Halloween Horror Nights. (It's an Indiana thing.)

Apparently, Orlando's opening night suffered a guest relations problem when ops didn't close the line for Stranger Things early enough to clear the queue before the performers were to be off from their shift, forcing Universal to send people away without seeing the house after hours of waiting. I've heard that Universal offered Express Passes for the ST house on future nights to those affected.

Any first-person reports from Orlando's opening weekend are welcomed!

Yikes! Universal fan FB pages have growled about unwieldy crowds -- including pics of Finnegan's with folks stacked five or six deep at the bar. As the season moves forward I am hopeful Universal will take a page from the Disney playbook and improve the management of their Halloween crowds.

Duff's and Moe's had lines out the door and down the street last night, which I've never seen before at USH. I've heard that Universal Orlando cut down the number of the pop-up pre-mix-drink bars it had open last night, increasing the wait times for the one that were available.

Clearly, Universal has attracted a drinking crowd for this event. But from the company's actions over the past two years, I suspect that it actually wants some of its harder-drinking customers to get frustrated and go away.

The quickest and, frankly, easiest way to do this would be to make the event dry, as it was in Hollywood. But that likely would drive away too many fans - and all those high-markup alcohol sales - so Universal continues to look for a way to finesse a middle ground.

That said, I do think the houses are just getting better. With Express and its ability to get you through everything before the crowd gets too crocked, it's one of the most enjoyable nights of the year.

TH Mickey s not so scary opening night was met with horrible over crowded reviews also , opening weekends are always tough for any event and both get better Day 2 had so much more positivity . Love both events equally and both companies do an amazing job

UO fan pages have complaints about Express waits being 30-plus minutes wait times ... HHN has devolved into a booze fest ... Drink, drank, drunk!

Love it! It all looks so good and the booze sales will only help the cause. Thank goodness Universal is not apposed to making money where it can. Fully applaud their efforts!

Attended UO on Saturday and found the houses and event to still be one of the best around. The event continues to attract more guests but it isn't anything an express pass can't solve. If it continues to grow maybe the solution would be to have the event at both parks...

It does sound like UO has lost its way at HHN. While dialing back the alcohol sales (even if only slightly), they have to make up those losses somewhere else. Whether that's letting more regular guests in the gates or selling more Universal Express, it does seem that Universal needs to recalibrate their thinking to ensure guests are not walking away from this great event disappointed.

Personally, I've never purchased Universal Express for HHN (and ALWAYS avoid Friday and Saturday nights), but I have observed that the UE lines for mazes have gotten progressively longer over the past 5-8 years. I can only imagine how frustrating it must be for guests spending an extra $50-$100 on top of admission to "cut the lines" only to wait in 30+ minute lines for multiple mazes. In reading about HHN each year, it seems that the current recommendation for locals is to visit multiple times throughout the season using a season pass or other multi-night ticket and tour in a very systematic way (or arrive just before midnight). For non-locals, it sounds like even UE might not be enough to allow you to see every single maze and scare zone in a single night (it was already getting tight if you weren't willing to visit from rope drop to closing), particularly on Friday and Saturday night.

I can personally attest that the RIP Tour is a very attractive option for those guests concerned that they may not be able to see everything in a single visit without serious planning. The RIP Tours are a bit more expensive than UE (over $180, depending upon the night), but they include food and a private guide that gets you into each maze without any wait. If you're really into HHN, the RIP Tour is the ONLY way to go, and I think I'll have a hard time visiting HHN again without doing the RIP Tour.

It sounds like HHN is having the same problems that Disney has with overcrowding at special/seasonal events, so it will be interesting to see if Universal continues to let more and more people in (along with increasing the prices and number of days), or if they will show restraint and accept that HHN can only grow so much from year to year.

I used to go back on the days when they actually asked how many in the group and let you wait a few mins so the scare crew can reset but a few ago they kept the line moving due to too many people and I hated going into a room as they are resetting, missing the scare. My sister would purposely walk real slow to create that few sec gap from room to room but last time a crew member told her to pick up the pace. I assume today they just keep the line moving?

Earl of Sandwich is coming back to Disneyland