New Thrill Ride Fever is a blessing that can rid the theme park world of a great many old and underperforming attractions that have outlived their appeal. So let's welcome The Purge, Roller Coaster Style, in which fans can demand the elimination of coasters hold back their parks instead of lifting them up. Here are my first seven targets, influenced heavily by Theme Park Insider's reader ratings:

We will start with Kings Island's sister park to the north, Cedar Point. In 2015, Cedar Point tried to revive its Mantis stand-up coaster by converting it to a floorless design. It didn't work. Rougarou remains poorly reviewed by coaster fans and at this point stands as a failed experiment in ride revival. Cedar Fair got it right in converting Mean Streak to Steel Vengeance, but it's time to just start over with a new ride to replace Rougarou.

If you want credit for having the most roller coasters in the world, which Six Flags Magic Mountain clearly does, is it too much to ask that all of those coasters be open and operating on a consistent basis? Yet Green Lantern remains the elusive white whale for many credit-counting Magic Mountain visitors, with uptime rivaling Princess Aurora. C'mon, get it working consistently or replace it with a coaster than does. 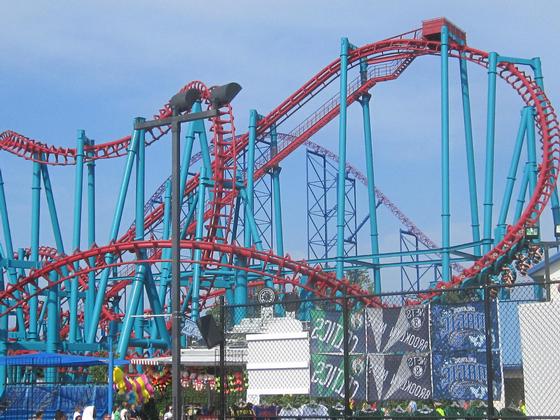 Okay, maybe there's a coaster fan out there who loves the head-banging intensity of the most aptly named ride in theme park history. So I will concede that we could keep one installation of the most hated coaster design in the world open in a new park for relocated attractions that we will call "Masochismland." 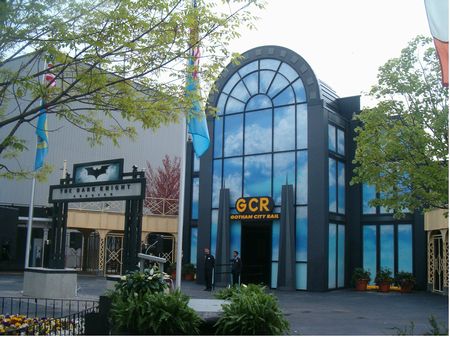 Put a Mack Rides wild mouse in a field somewhere and I will go ride it. But please don't encase it within the theme of the best superhero movies ever made unless you're willing to spend the money to bring the experience up to that level. Six Flags, at the depth of its financial problems, did not and probably could not do that back in the late 2000s when these coasters opened. So these rides stand today more as a reminder of missed opportunities than enjoyable story-driven experiences. Better to erase them and move forward. 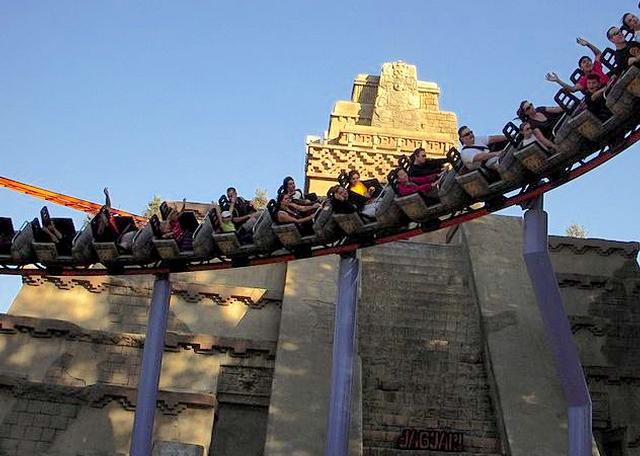 Officially situated in the park's Fiesta Village, Jaguar (I refuse to add the park's preferred exclamation point), seems more like it stands in No Man's Land. At 35 miles per hour and 45 feet, it's not exciting enough to stand as a thrill ride, but its light decoration doesn't provide enough theming or story to sustain it as a narrative attraction. 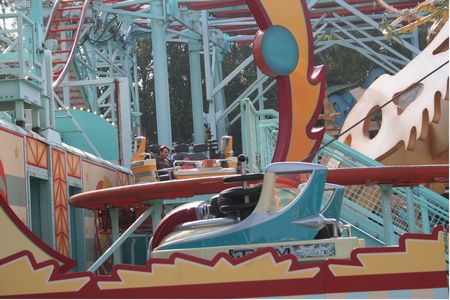 Disney, you are better than this. If you really want a fun roadside coaster in this space, instead of just compromising when Disney management cut the park's budget in development 20 years ago, just go clone Mine Blower from Fun Spot down the road. 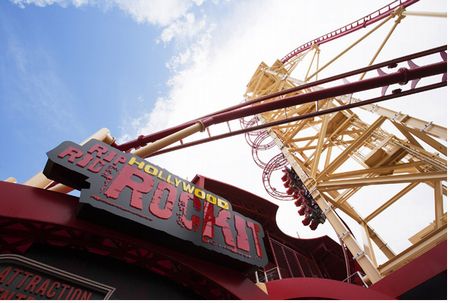 I'm going to get ahead of the reader ratings here by airing my grievances with Universal Orlando's great missed opportunity. It seems to me that Universal opted here for a track that looked cool instead of one that provided a great ride. Eternally rough and offering the pacing of a drunken sailor, HRRR's on-board music can't save this experience. Heck, I'd rather Universal dropped the "pick your music" gimmick and instead hired a musician to score a soundtrack that matched the ride experience. But I would vote for junking this track and designing a new ride experience first.

What are your top targets in the Roller Coaster Purge?

In St. Louis, The Boss needs some serious help. That coaster seriously hurts and needs either the Iron Horse treatment or just removal. Of course. Six Flags St. Louis has 2-3 other candidates too. So why stop there?

I definitely agree with HRRR, its head-banging, but not in a good way.

I'm going to add a UK one to kill: The Revolution at Blackpool Pleasure Beach. It's not that there's anything "Wrong" with the ride... But a Shuttle Loop coaster is just plain old and tired... and unlike the many classic rides in the park, a shuttle loop coaster is never going to be a retro classic.

If I had to pick any ride model in the world it would be the Volare, it is far and away the most ridiculously painful and uncomfortable coaster I have ever ridden.

From this list I have to go with Green Lantern at SFMM, otherwise known as the Zacspin. It is absolutely horrible in every way: painful, nauseating, not fun at all. I hope it never re opens. I actually rode the new S&S version at Great Adventure early this year as my friends kept telling me its a lot better than the Zacspin, and I hated that as well for all the same reasons.

SLCs are really bad as well but not quite up to the epic retardation that is those two rides.

I'm shocked DLP's Indiana Jones coaster didn't make this list. It's rough as sin, and a completely uninspired track design. Tokyo's can dodge the bullet for having a slight upgraded theming package, but only just.

This is easy. The Deamon and The Grizzly at Santa Clara Great America. If they give the Grizzly the RMC treatment that would help but with the park new height restrictions it's time to bring in some new costers.

Only thing I do not agree with is Hollywood Rip Ride Rockit. This coaster is a blast and one of my favorite at Universal and in Orlando.

Having ridden every coaster on this list, I agree with all of them except Rougarou. While not the greatest ride, it's still a decent B&M that fails to stand out at Cedar Point but would be an excellent signature coaster for a mid-size park. The rest of these can die and I wouldn't shed a tear.

1. All Vekoma SLCs and Boomerangs that do not feature the new style trains
2. All Zamperla Volares
3. Grizzly at California's Great America
4. All Arrow loopscrews, unless they are the park's largest coaster
5. Blue Hawk at Six Flags Over Georgia
HM: Ninja at Six Flags St. Louis

Oh no you don’t! Rip Ride Rocket is awesome. And is has a perfectly good soundtrack. Put on Kickstart My Heart next time and let’s talk. It is made for that ride.

I think Jaguar is a great family coaster. So many family coasters are much too short. Jaguar seems to keep going and going (and going). I think of it as Knott's monorail.

And I've never experienced the head banging on HRRR that seems to bother everyone else. Hulk smashes (ha!) my head more than HRRR.

Goofy's Sky School should be on the list. The Goofy overlay helps a bit, but it's still just a (even more lame) standard Mack mouse.

#1: Timberwolf at Worlds of Fun in Kansas City. That thing has been unrideable since it was built, and has only gotten worse. Why Cedar Fair felt the need to rebuild some of the track is beyond me. The only thing that will fix this wooden coaster is a tanker truck full of gasoline and a match.

#2-56: Every single Vekoma Boomerang operating as of today (according to Wikipedia). Fun when they first came out, but you can’t go to a regional park without seeing one of these clones cluttering up the midway.

Ive always like the rip ride rocket they could update the music every year and maybe the stupid cartoon characters on the tv while you Q. but the ride itself is fun. The buy your ride and photos at the end ive never seen working for a few years either.its like they keep it running but universal have abandoned it

Definitely agree regarding HRRR. Universal should be able to do so much better.

Mind Eraser for sure. This earns the dubious distinction of being the 2nd worst coaster I ever rode (the 1st is Steeplechase at Luna Park). However, I'm sorry that I didn't ride The Riddler Revenge f/k/a Mind Eraser when I was at Six Flags New England last weekend, as someone in either the SFNE or SFGAdv Connoisseurs FB group had good things to say about it.

Rougarou, which I rode in July, isn't all that bad. In no way exceptional but perfectly OK and probably an improvement over Mantis, which I never rode b/c I don't do standup coasters.

Agreed that Dark Knight could use more theming but other than that - and the fact that the pre-ride video presentation gets old awfully fast - I have no problem with it. And that makes me an anomaly, as almost everyone I know hates it.

One I'd really like to see bite the dust is Dragon Fire at Canada's Wonderland. That one's a real headbanger. Colossus at Thorpe Park is also a headbanger but the latter part of the ride, with the 4 consecutive heartline rolls, is so good that I'd hate to see the ride go entirely. What it needs is some re-profiling to make the initial part more enjoyable.

Shouldn't they get rid of Green Lantern at SFMM because it's awful and painful and no fun? That fact it's always down is probably for the best, it means unaware people are spared. I haven't been on Riddler's Revenge since it was refurbished, but that was a painful shell of its former self worthy of replacement the last few times I was on it.

Jaguar sure is an odd coaster, but it's the only family/kiddie coaster I can think of that's not dinky. As a kid, it looks big and intimidating, instead of secluded in the kid section of the park with the rest of the baby rides. Did they ever bring back the flame effect?

And what's wrong with HRRR? Not the greatest ride, but none of us experienced the head-banging that you mention. And at least it's unique. Both the load station and restraints too.

The Demon at Great America Gurnee needs to either be rebuilt from the ground up like Universal did Hulk coaster or tear it down....It's a rough headache inducing back hurting machine.

I guess HRRR splits opinion, I personally like it. I don't see how it can bang your head that much when it doesn't use a head restraint?
Primeval Whirl is just such a disconnect from everything else at Disney, but I think that whole area of the park is and I'd wipe it out and start fresh.

I really hate HRRR. Too many brake sections. I think those jerky sections have as much to do with my post-ride headaches as head banging does.

I'm very late to the game, but I can't believe Iron Dragon at Cedar point isn't on the list. It was a ground-breaking ride when it opened, but now it's just sad. I've heard they either tested or released a VR experience for it, but there is no way that is enough to save this thing. the only positive is the surrounding "jungle" environment

Will Walt Disney World do something unprecedented next month?