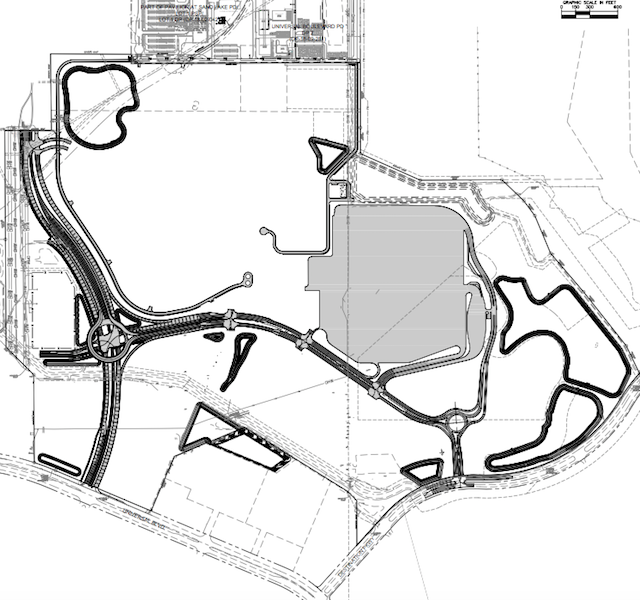 A tip of the hat to Richard Bilbao at the Orlando Business Journal, who first published the plans this morning. That led my to the Orange County "Fast Track" public records site, where I downloaded the complete plans for myself.

The plans describes the site as 541.5 acres, including 5,089 provided parking spaces. The site's maximum allowed building height is 400 feet. There are 135.38 acres of open space required for the project, and the planned development will include 100.72 acres of asphalt area and 1.4 acres of sidewalks. Orlando-based Kimley Horn is the engineer of record for the project.

The plans reveal the layout of roads and lakes for the project, including what looks to be the project's parking lot or structure. It does not detail plans for the theme park or any other amusement or accommodation facilities that Universal might be planning for the site. This just shows how the cars and water will move around the site.

It's not a stretch, though, to assume that what is missing from the plans is what will be filling the empty spaces that the plans do not detail.

Universal Orlando also is building a 4,000-room, two-phase Endless Summer Resort on the site of the former Wet 'n Wild water park, which it closed and demolished nearly two years ago. This additional expansion site, which is located near the Orange County Convention Center, provides Universal with more than enough space for a fourth gate at the resort, following Universal Studios Florida, Islands of Adventure, and the Volcano Bay water theme park, all of which are located on Universal's original property to the north.

Universal is sitting on an abundance of IP that it could use for this gate, including its announced Super Nintendo World land, which is now under construction at Universal Studios Japan for a 2020 opening. Universal also has the rights to its Dreamworks Animation franchises, not to mention an ever-expanding set of locations from the Wizarding World franchises, to theme additional attractions in a new park.

Even though the public documents reveal some of Universal's plans, the company remains somewhat tight-lipped about them, confirming only that it is working on something, but not exactly what it will be or a timeframe for its development and opening.

Update: For those of you who prefer your news in video form, here ya go:

I was just reading the article in the OBJ ... all very interesting. It certainly ties in with all the construction going on along Sandlake Road. The road shown connecting to Universal will go north and, I assume, connect to Sandlake. This would give a north and south entrance/exit road to the new area. The land grading along Sandlake goes on 24/7, and of late there has been 2 Universal security vehicles at the entrance.

Other Universal news .... the 4 pieces of the pedestrian bridge have now been connected, and ready for placement. Posted signs are saying Kirkman will be closed 6pm to 6am next Sunday, so for sure that's when it's planned to be put in place. It will be a long way from opening though, as some of the ramps still need to be constructed, but at least it's taking shape.

A lot of roads and bridges that will need to get built. Ambitious and impressive.

I'm planning the first Disney World trip ever as a father (I've been numerous times before this milestone). During our planning, we decided against Universal with our 5 year old and 2 year old due to the lack of things for them to do in comparison with Disney. Don't get me wrong, I love Universal, but for the money and time commitment, Disney has everything I need for this particular demographic. So, if Universal could up their family friendly (and not just 48 inches and up) offerings (think dark rides, minus the abundance of screens), I could very well see my family taking an entirely Universal trip in the future and skip Disney entirely (at least until the newer additions are all complete and I'm tempted to return). My Orlando trips have almost always been Disney/Universal trips, but with such huge resorts on both ends, it's just no doable on my budget anymore. Disney wins this round, but when this new park opens, it might be Universal next.

Shaun, my family has already been there. I hate to say it to the Disney regulars, but it is somewhat liberating when the kids get old enough that they only want to go to Universal, and you do not have to pre-plan everything to the minute detail or stand in line. That being said, we are about to do an extensive Disney only trip due to expiring points with the rare no-Universal leg.

What if Universal did a water park/hotel resort combo ala Schlitterbahn...

Considering the size and scope of the endeavor we're looking at 2023-2024.

Shaun, I'm a Disney fanatic and have taken my kids (5 & 7 now) several times. We decided on Universal last fall instead of disney. I was so worried I'd be disappointed the whole time. I was wrong. Universal has multiple playgrounds for kids that I never noticed going as an adult. We filled 7, yes 7 days, at Universal with then 4 and 6 year olds. Their favorite ride was the Jimmy Fallon ride, who knew, and they played at curious George, Barney, and sponge Bob, plus other playgrounds I can't recall the names. They loved it. At Islands of Adventure they spent time at Dr Seuss, Jurassic Park flyers, and the too land. Plus the trek back to the hotels is so much shorter so you can spend afternoons at the pool without feeling too worn out. We went to Disney one night for Mickey's Not So Scary and got our Disney fix. My 4 year old loved meeting the transformers and the superheros in the marvel area. Every kid is different but mine loved it.

Looking at the map I believe the inner road that seems to have a cul-de-sac at each end will probably be the ring road used by team members to get around backstage. If you look at a map of IoA you will see the same idea running from Hulk around the park to behind Toothsome leaving the entry/gate right between them. Just my 2 cents.

@Shaun Fisher The general consensus on a lot of fan forums is that Universal will go for the younger market with this park. They already have the difficult teen and tween market locked in so it's only logical to diversify.

The project is impressive and a lot of work. It's always exciting and quite a novelty nowadays that a new, big theme parks is actually going to be build in the US.

Universal please include Jaws too

If I'm designing this park, it will include lands based on at least two of the following Dreamworks Animation franchises: Shrek, Kung Fu Panda, How to Train Your Dragon, and Madagascar. (Shrek and Madagascar lands are already in Universal Studios Singapore.) Throw in a Minions land and possibly Secret of Life of Pets for Illumination, too. Then you've got Super Nintendo World that has to go someplace, too.

Given the line-up of park-worthy IP that Universal has at its disposal right now, it very easily could create a younger-skewing park here. If it does go in that direction, then I think that would push Universal toward waiting on an announcement, as there's no sense in promoting a new park whose target market at opening isn't even born yet.

Mr. Niles (for the win): "Given the line-up of park-worthy IP that Universal has at its disposal right now, it very easily could create a younger-skewing park here."

I Respond: Note to the Disney princesses -- check your rearview mirrors. There's something coming up behind you ... And it will inevitablly start clolsing very quickly.

One of the IPs they need to acquire is Troma if they don't do something about that sewage treatment plant which looks to be just north of the proposed parking garage. Can you imagine the difference in price between a room in a resort hotel with a pool view or garden view and one with a settling pond view?

I'm sticking with 2025 for a new park and entertainment complex to open. They've got to do something about the sewage treatment plant first.

Or they could acquire the rights to the Lord of the Rings and make the part of the park closest to the sewage treatment plant the Mordor section of the land. Now that would be deeply immersive theming!

Not impressed and still looks like a logistical nightmare.

The plans Disney has in motion are something that are the most exciting.

Keep trying Universal, you’ve got a lot of ground to cover if you ever want to be in the same league as Disney.

Relive the highlights as regional parks wrap the 2018 season