November 15, 2018, 8:21 PM · Apparently, some blueprints for Disney's "Project H," well known to be Walt Disney World's new Star Wars-themed role-playing hotel have dropped on a Florida state government website. After a bit of Googling, I found them, so let's take a look. (Fortunately, no Bothans died to bring us this information.)

First, here's how you can get the document yourself. Go to http://prodenv.dep.state.fl.us/DepNexus/public/searchPortal and then search for "Project H" under "Document Subject" or "Reedy Creek" under "Facility Name." From there, you will click the arrow to download a .zip file that will contain a 31.1 MB PDF file with the plans.

I've stitched the relevant pages together in this image: 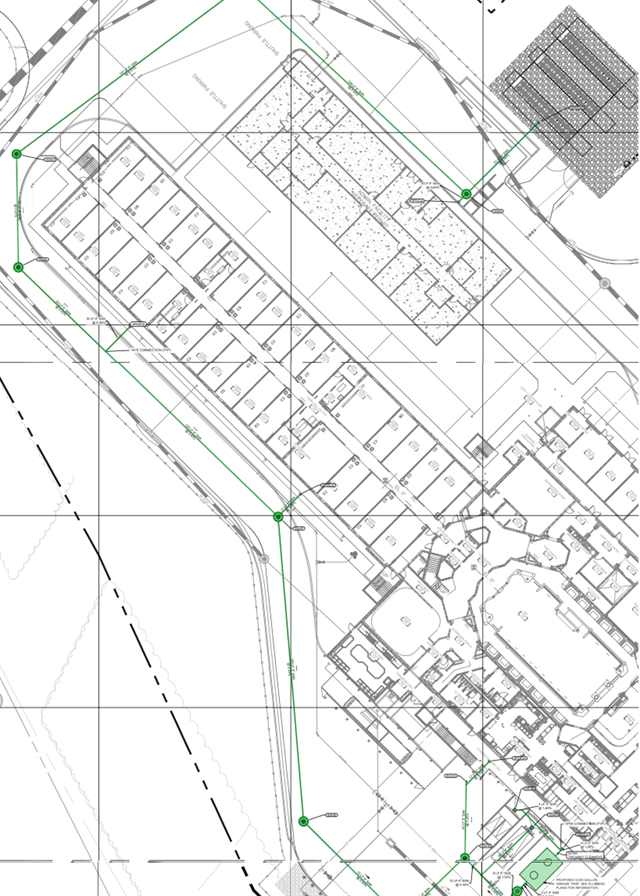 And made the relevant pages available for a direct view, too.

The first story of what is expected to be a two-story hotel will have 34 rooms, or "cabins," as they are called on the plans, with two of them being larger "first class" cabins. The rooms are arranged down a single, straight hall that extends from an elevator lobby. 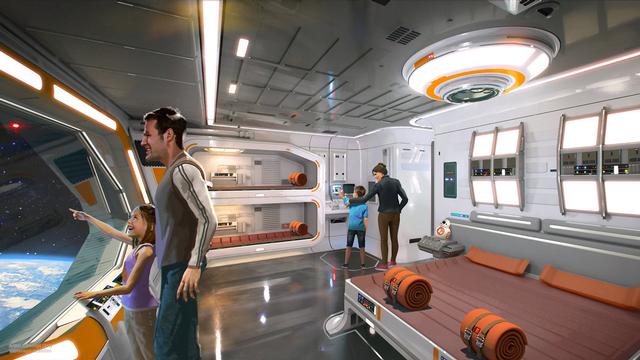 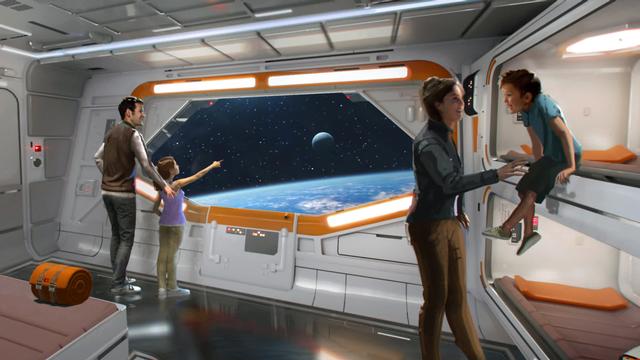 On the other side of that lobby is the concourse, which stands between the elevators and a table service restaurant, with a buffet area on the far side. (Self-serve buffet for breakfast and sit-down meal for dinner?) 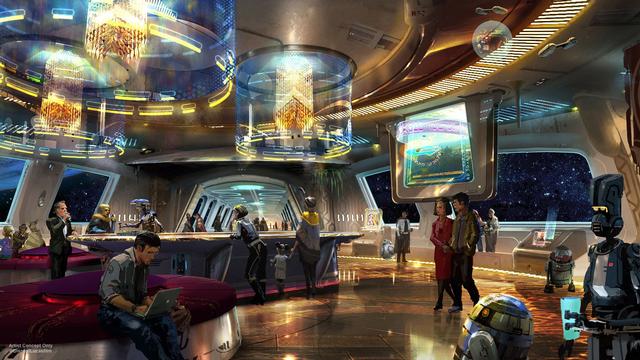 On the right side of the restaurant, facing toward the rooms, is a series of rooms that appear to represent the heart of the spaceship that guests will be "traveling" on in their Star Wars hotel adventure. Guests will enter the hotel via a porte-cochere that serves as the entry into the spaceport from which they will depart. That is connected by a short road over the old Studio Drive into the Star Wars Galaxy's Edge land, which guests will travel to and from via shuttle buses.

Still no word on an opening date... or prices.

What kind of experience do you want from Disney's new Star Wars hotel?

Two stories. 34 cabins on one story. Unless there are significantly more on that second story, we’re talking super-exclusive. I’m not sure we can overshoot on how high these prices will be.

@Steve Not to worry, there's a credit card or equity loan/line of credit for that!

I thought for sure the new hotel would have at least 100 rooms. These plans seem to indicate no more than maybe 80-90 rooms, so I wouldn't expect nightly rates being below $1,000/night in order for this resort to make ends meet. Perhaps they will make these all-inclusive (like a cruise ship) to soften the blow, rolling the cost of food, entertainment, and maybe even park admission in with the rate. The designs also seem to indicate that the general public may not be able to access the resort at all, making it even more exclusive and further validating the obscene prices Disney will inevitably charge.

I guess the only positive is that this probably won't open for at least another 2 years, so fans have plenty of time to save up - start diverting money from your 401K to your Star Wars Hotel fund right now, and maybe you'll have enough to cover the first night by the time it opens.

The hotel will have 100 rooms.

Wow, these sleeping quarters remind me of my days in the US Navy, We use to have coffin racks to sleep on... Best sleep I ever had in my life...

Probable because we were so damn tired, but still best sleep ever!!!!

"That is connected by a short road over the old Studio Drive into the Star Wars Galaxy's Edge land, which guests will travel to and from via shuttle buses."

Shuttle buses, really? Why go through all that trouble making an immersive experience to ruin it with shuttle buses? I expected the back of the hotel would exit directly to Galaxy's Edge.

I could be wrong about this, but based on the shape of the rooms on the blueprints compared to the layout that appears in the renderings, the suspension of belief with those windows will be broken anytime you catch a glance into someone else's cabin. Since the second floor won't require the amenities located on the bottom floor, I'm guessing this hotel will have 100 rooms. Remember, you can't have too many people since they'll all need to be able to get the full experience during their stay, which of course would require additional amenities. So yes, a low capacity makes perfect sense. If this gets booked up quickly, I'm sure we'll see an expansion.

Well, lets play with some pretend math here.
Disney's All Star Movie resort has 1920 rooms.
Lets say the average cost to stay in a room there is about $150.00/night.
Lets say the hotel operates on an average occupancy rate of 90% over the whole year (too low? too high? I'm just guessing here). That gives us an intake of $259,200/day - or, close to 95 million over the entire year.
All Star has no fancy restaurant, no fantastical theming, quality basic-level Disney service, and windows that look out onto...whatever is outside the window.

So, let's say they even go for the average between the two extremes of Disney quality accommodation (which is probably unrealistic), and expect that they want to pull in $150 million over the year. I'm figuring for pretty much 100% occupancy. At a hotel with the finest theming the world has ever seen, with the highest level of service from people who will provide high-end hotel service, and pretend to be a space-man or alien for your amusement. And also includes views that look out onto the Star Wars Universe, 24 hours a day. That means that, with 34 cabins, the cost per night would have to be in excess of $12,000.00

If my math is correct (and there is no promise that it is).

Infuriating. Disney has built its success on generations of working families who save all year for a Disney experience. And how does Disney reward its millions of supportive fans? By building a experience that only the upper 1% could ever hope to enjoy.

Why not just start closing the park to us commoners for Sultan's Day? Surely there's a oil barron prepared to pay more for his family than they could make from the rest of us together, right?

There was a time when my middle-class family from Atlanta would stay in a park-facing Contemporary Hotel room for a week. Now, we could barely afford the cheapest, non-view room there.

This will be just one more Disney experience that's unavailable to us commoners. It's galling, and builds on a resentment toward Disney I never thought I'd feel. Starting to think maybe it isn't such a happy place, unless you're the richest of the rich.

According to what I saw elsewhere, this will have approximately 100 rooms total and a maximum capacity of 400 per night. If it wasn't already obvious, it should be now...this is not a hotel in the normal sense, and more a component of a specialty experience that will only be available in an all-inclusive format. I'm still sticking by what I've said before on price: $1,500-2,000 per room (with a possible extra fee for third or fourth guests), which covers an all-inclusive two-night experience.

Millionaires on the first floor. All you other poor schmucks who ONLY pull down six figures --> get your butts upstairs!!

This is going to be an amazing story to follow, once it opens. It could very well be the blueprint for Universal to consider a Hogwarts hotel on a similarly small, but luxurious scale.

AJ - An all-inclusive, two night experience for $2000 is more reasonable than I thought it would be.

How much does a disney cruise cost per night?

Angry Duck - Cost of a Disney Cruise is in the vicinity of $1700/person for a four night cruise for a trip from Florida to Bahamas and Castaway Quay (not including taxes or port expenses). Lets go with about $425.00/night per person +taxes, etc; - not including deals for 3rd and 4th child passengers.
US Dollars - which is the part that always kills me, due to poor exchange rates.

I imagine the shuttles here will be to theme park buses as Universal's Hogwarts Express is to theme park trains. I'd look for the same "fake window" screens as used in the SWH rooms, so that you will not see the backstage or surrounding areas when on board.

>Perhaps they will make these all-inclusive (like a cruise ship)

This prediction from Russell is, IMHO, 100% correct. And just like a cruise ship, I would wager that all of the "ship's" amenities and services and accommodations will be reserved for those paying full freight fare for the experience. This will not be your typical Disney hotel where the average Mickey-eared park visitor can drop in for a drink at the bar, a snack in a cafe, and a visit to the gift shop. It will be an isolated/hermetic experience (in a positive sense, IMHO) for those paying an all-inclusive rate for lodging, dining, and entertainment, just like a cruise ship.

My only concern is that the hotel room layouts, as described elsewhere, seem to strictly conform to the stereotypical 4-person family unit (Mom, Dad, daughter, son) - what if you've got three kids, or perhaps you just want extra space? It's not immediately clear if there would be things like adjoining rooms and suites, something that Disney is VERY good at supporting at their other hotels. After all, families come in all shapes and sizes and needs, and Disney's other WDW hotel accommodations reflect this diversity in full.

B Goodwin I have a few suggestions that would make your math comment a little more accurate in my opinion. I’d say all star’s year round capacity average is probably closer to 80-85% and grand Floridian, being one of the top and most popular resorts, is closer to 95%

Why are some people upset that this will be "too" expensive. I mean, just don't go? If you want realism....there is a price to pay for that. If you want a $150/night experience, go to holiday Inn and get your stomach full with waffles and microwaved eggs. For me, I'd gladly spend $999 a night for one person, and maybe an additional $250 for a 2nd person. Maybe that's still too low. Perhaps its more money? But, supply and demand at work here. Disney isn't going to spend $300 million on a hotel, and charge $99 on hotels 3rd party websites. If you want an affordable experience, pay the $120 per day for the theme park, and shuttle from a cheap hotel in Kissimmee, Florida. I have season passes to Disney World - Orlando, and I love having options...even if those options are expensive.

Wish the immersive experience had an actual name and surprised that the Star Wars: Galaxy's Edge attraction name announcement for D23 didn't include one. "Star Wars Hotel" is an awful moniker and since no one in the series ever uses the title "Stsr Wars," this is actually contrary to their immersive role playing goals. Sad to see that name on the renderings. Still expect Project H to grow a name worthy of the concept.

Dave - Yeah, it's a shame this project isn't getting any publicity... *crickets*

Disney has thought of all of this. Calm down and enjoy the ride.

What's playing for the holidays at Universal Orlando this year?