It's time again for Grinchmas at Universal Orlando Resort

November 17, 2018, 5:58 PM · After the media preview Wednesday night, the holidays officially kicked off today at the Universal Orlando Resort.

We showed you Universal's Holiday Parade Featuring Macy's and The Magic of Christmas at Hogwarts Castle light show in our earlier report, so today we will bring you three features of Universal's holiday celebrations that we didn't get a chance to share with you already.

First up — and we teased this earlier — is the refreshed production of the "Grinchmas Who-liday Spectacular." Featuring a new set — inspired by the 60th anniversary of the publication of Dr. Seuss' "How the Grinch Stole Christmas!" — the 20-minute show pads the original story a bit in the first-act, but that's pretty much just an excuse to get a diva with a low-cut dress on stage to belt out a show-stopper. Chip Davis from Mannheim Steamroller has supplemented the production's score with addition songs and arrangements for the music from the 1966 television special.

The cast does a wonderful job, though it was the dog playing Max that got the biggest reaction from the audience. (Never work with kids or animals, says the theater cliche.) Universal's got another film version of the The Grinch coming this Christmas season, so we'll see if that can displace this show as my second-favorite retelling of the story, after the 1966 production. The Grinchmas Who-liday Spectacular plays multiple times daily, with its entrance in Seuss Island at Universal's Islands of Adventure, even though the show plays in one of the sound stages next to Universal Studios Florida. So there's a bit of a walk backstage to get to the theater. (Enjoy the insider views!)

Over at USF, I also would recommended Celestina Warbeck's Holiday Spell, playing multiple times daily in The Wizarding World of Harry Potter - Diagon Alley. I am a huge Celestina Warbeck fan, and just love her shows with her backup singers, the Banshees. This 12-minute production features Christmas songs original to The Wizarding World, making this just another of the details that make this my favorite theme park land anywhere.

Around the corner at The Leaky Cauldron, the Holiday Turkey Platter ($15.99) is now available, though we didn't see it on the menu yet. (Just ask for it!) The meal features two thick slices of carved roast turkey breast, stuffing, roasted carrots and parsnips, walnut Brussels sprouts, gravy and cranberry sauce. Again, The Leaky Cauldron just reinforces its status as perhaps the world's best quick service theme park restaurant. 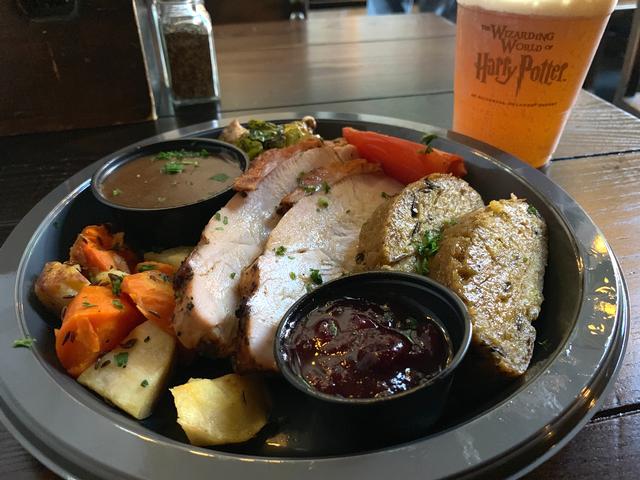 It's pictured with a cold Butterbeer ($6.99). Hot Butterbeer is also back on the menu now, for the same price. The Holidays at Universal Orlando Resort run through January 6, 2019.

What's playing for the holidays at Universal Orlando this year?

I had the opportunity to see Grinchmas on Friday night at a holiday AP event that was held. I have to say that the show got a very nice coat of polish this year. The set has been updated, the cast appeared to be a step above in terms of talent this year and the show itself has been refreshed with small touches that really pay homage to the original 1966 cartoon.

Once again, Universal Entertainment proves that they can put on high caliber productions when given the budget to do so. Considering the massive crowds that jam the soundstage every year to see Grinchmas (and Academy of Villains at HHN,) stage productions/entertainment at Universal are in high demand. Universal doesn't use the theater space that they have on property to fulfill what is clearly something their guests want. Toon Lagoon amphitheater sits empty, Sinbad's amphitheater is now also empty, while Animal Actors and Fear Factor are desperately in need of a refresh/replacement. All because it is far cheaper to throw out some pop-up street performers.

Here are the names of Disney's new Star Wars rides, and more