Here's a new concept for nighttime entertainment at water parks

December 5, 2018, 3:59 PM · How can you keep a water park open at night? Water and darkness are a bad mix for safety, so keeping pools and waterslides open at night requires quite a bit of lighting power. That's not a big deal for hotel pools and the other relatively small installations, but it becomes an overwhelming issue for sprawling water parks, which is why most of them close when the sun goes down.

But water parks are multimillion dollar investments, so operators would welcome any opportunity for their properties to keep making money with extended hours.

Here's one solution: Turn the waterslides into performance venues. WhiteWater — which has built wave pools, slides and other water ride attractions for Disney, Legoland, and other parks and hotels — today announced a partnership with Cirque du Soleil to develop a new water park development concept. WhiteWater's rides and pools would entertain guests by day, while becoming performance venues for Cirque du Soleil productions at night. 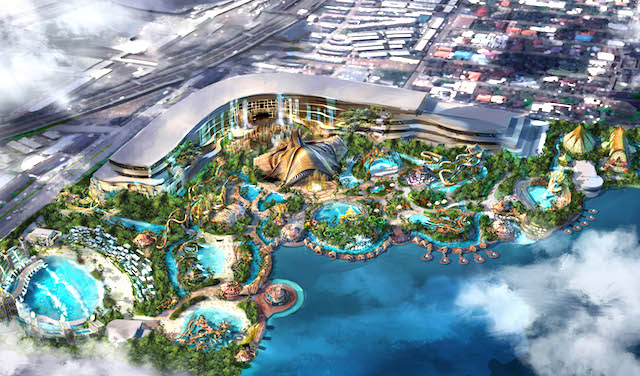 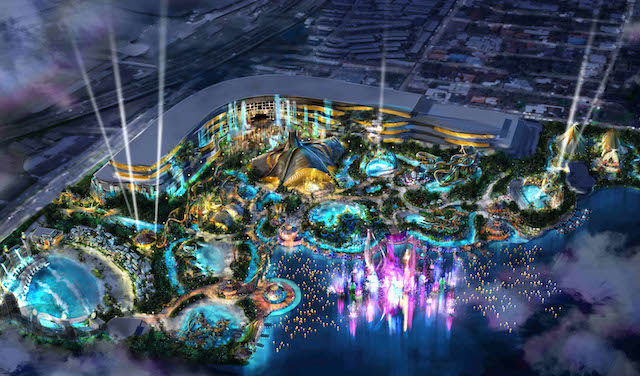 ... and after. (Concept art courtesy WhiteWater.)

The water park morphs into a festive venue with music, specialty food and drinks, and picturesque illuminated trails which intertwine the main features of the evening program.

The programs consist of 15-minute one-of-a-kind shows that take place at the very same attractions that guests were enjoying in the day. These breathtaking productions will feature Cirque du Soleil performers and run a few times every night, allowing guests to pick and choose which ones they’d like to enjoy and in what order. 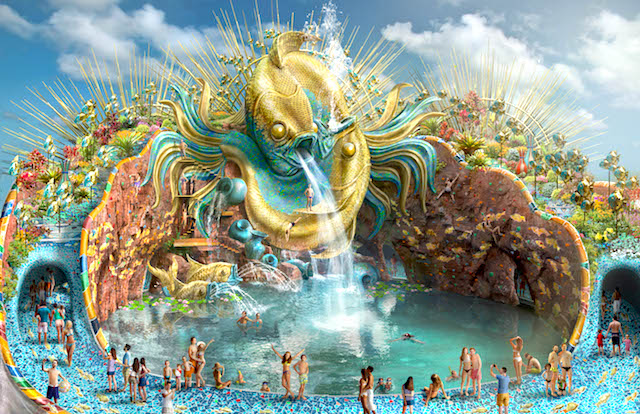 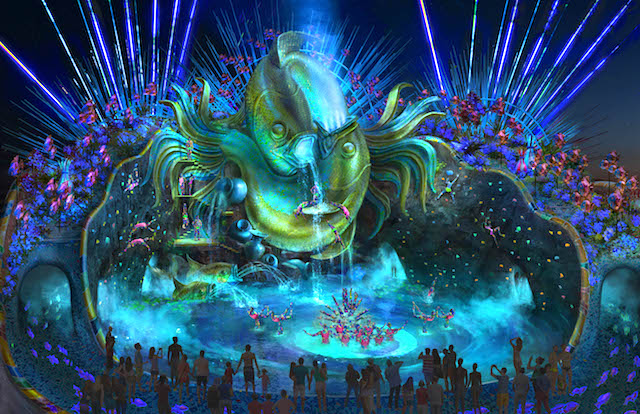 WhiteWater does not say where this concept would be installed, but Cirque du Soleil has been developing a themed resort in Nuevo Vallarta, Mexico, which reportedly will include a water park. That resort's first phase is expected to open in late 2019 or early 2020.

What do you think about extended hours for water parks? Is this the sort of thing that would entice you to stay, or would you like to see water parks try something else?

I am not a water park person but a park like Volcano Bay looks amazing and I would love to visit it at night to stroll around the park, looking at the beautiful plants and waterfalls and enjoy a drink and a bite to eat. It also could be a great location for a luau or a fun music event.
I think Cirque is on to something and it looks beautiful.

I did not realize how much I needed an after-hours luau on Waturi Beach until just now.

I've been to a special evening event at Typhoon Lagoon -+ live entertainment, dog machines and lights. Disney put on an epic evening

Not trying to be rude here, but looking at some of those pictures, they are not really representative of the traditional water park clientele, are they? At least not at stateside parks. Can’t really speak to water parks in other countries.

I could see some sort of nighttime show, but how long will guests really stay after the water attractions close? If you're closing the slides and pools at sunset, you could maybe hold them for 15-30 minutes beyond sunset before you have to give them something to do. With a nighttime show lasting maybe 15-20 minutes, all you're really gaining is a 45 minute extension of your day, during which time most guests are just sitting around waiting for the show or actually watching the show. Would the amount of revenue generated over those 45 minutes really be worth the cost of putting on a show every single night, in addition to staffing the park for another hour (though most water safety staff would not have to be extended)?

On the surface this seems like a cool idea, but logistically, it really doesn't make a lot of sense. Parks would probably find more success lighting certain sections of the park for night-swimming or enclosing certain slides and attractions so they can extend their operations into the night than they would spending so much time and effort to extend the operational day by less than an hour for a nighttime show. I will note that most water parks rarely have any live entertainment - a few water parks have a dive show, while some may put on a singing/dancing show and/or dance party with a live DJ. Live entertainment just isn't something that water park guests are looking for, and is something that is not suited to the layout of a typical water park, but adding live performers would be a completely new expenditure for most water parks. This is one of those ideas that seems cool on paper, but doesn't seem very viable economically.

I like this concept and could see it as a separate ticket event. They’d probably still need a headline show in a special water theater in addition to the repeating performances around the park. I would imagine it would be like Universal Studios by day and HHN by night. Same park, two different ticketed experiences.

That's what I was thinking too Scottland. It's not a way to extend the day for park guests, it's finding a secondary nighttime use for an existing facility.

First look at Tokyo's new Beauty and the Beast ride