December 17, 2018, 6:34 PM · Downtown Disney's Napolini has reopened with a new concept and menu. The quick-service pizza restaurant in the Disneyland Resort's shopping district had served pies by the slice from the Naples Ristorante next door, but now Napolini is offering personal-sized pies, made to order.

The concept will be familiar to theme park fans who have eaten at Blaze Pizza at Universal Studios Hollywood's CityWalk or Walt Disney World's Disney Springs. But these assembly-line "fast casual" pizza joins often deliver crusts barely a step above frozen pies. Unlike many theme park pizza parlors, Naples — like its Patina Group sibling Via Napoli at Walt Disney World's Epcot — deliver well-risen, blistered crusts that are both crisp and flavorfully chewy at the same time. Could Napolini recreate that wonderful crust that it used to serve from next door, under its new format?

I am delighted to report that it can. You can order your own selection of toppings at Napoli, but to put the new restaurant to the test I opted for a basic Pepperoni as well as the Capri — with shrimp, pesto, and lemon — from its signature menu.

I wanted to see if Napolini not only could deliver that crust, but also the well-cupped pepperoni from Naples' pies. And if it could deliver some bright Mediterranean flavor with a not-so-traditional topping combination.

Take a look at these beauties: 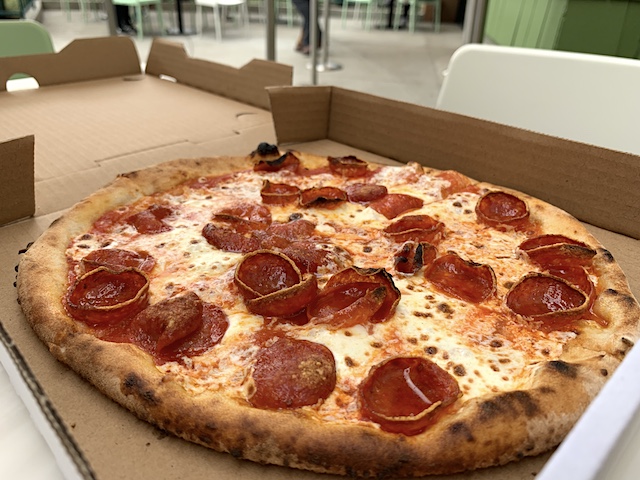 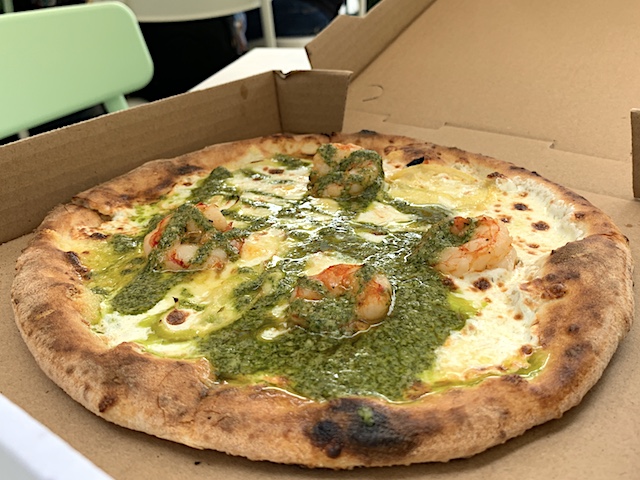 I strongly recommend letting these pizzas cool for a good five minutes before tucking in, to keep the toppings both from sliding off and from burning your mouth. Served straight from a blistering wood-fired oven, these pizzas need a few moments before they are ready to eat.

They will be worth the wait. These are simply the fast-casual pizzas I ever have eaten. The pepperoni was perfect, cupped and barely charred at the edge, sitting atop the creamy mozzarella I love from Naples and Via Napoli. But the Capri was even better. This one features a blend of mozzarella and Fontina, supporting four perfectly cooked shrimp, whisper-thin lemon slices, and pesto.

The bright, sharp lemon brought everything together like the Persian rug in Jeffery Lebowski's apartment. Save for an awkward slicing job that left one big piece with two shrimp and a small sliver with none, this was a perfect pizza — where crust, cheese, sauce and topping stop tasting like individual elements and come together as something distinct and wonderful.

The best part? The pizzas cost $7.45 each. At a theme park? Are you kidding me? The basic cheese pizza costs $6.95, with toppings at 50 cents each, which could add up quickly on custom pies. That makes the six multi-topping signature pizzas the best deals on the menu at $7.45-7.95 each. In addition to the Capri, the other options are:

Grab-and-go sandwiches, salads, desserts, and drinks also are available, including beer and wine.

That Capri pizza looks like a sloppy mess with pesto unevenly distributed across the pie. The observation of the unevenly shaped slices doesn't buoy my confidence. Is the lack of quality and consistency due to being new and busy, or will these messy looking pies be par for the course?

I will also reiterate my criticism that all of the rapid-bake fast casual pizza joints opening around the country offer unlimited toppings at the same price. Why is this place sticking in the stone age charging $0.50 for each topping on a custom pizza?

I think because they want to drive people to order the signature pizzas. Those are the items they've designed for optimal flavor. So they are pricing them for optimal value, too, in the hopes that people will order the pizzas that show the place at its best.

I get it, but other rapid bake pizza joints push signature pizzas too, and probably sell far more of those than build your owns simply because the signature pies are easier to order and are a known quantity for the guest. Charging for each topping in this format is regressive, and counter to what has made the concept so successful across the country. If they were concerned about food cost and gluttons piling on the unlimited toppings, they could at least offer a base-price pie with up to 5 toppings (with extra toppings at $0.50), or put a flat limit of 8 toppings on any pie, using the even cooking argument to prevent guests from overloading pizzas that require double the time to cook, gumming up the flow of the line.

My point is that no other rapid bake pizza restaurant that I've been to (&Pizza, Mod, Pie Five, and Pieology) charges for individual toppings, and these places are wildly successful with competitors sometimes steps apart in malls and shopping centers. These restaurants are successful because they are simple and fast, and a cashier at the end of the line trying to tell whether the larger chunks of ground beef are actually sausage, necessitating an extra topping charge, slows the process down and creates confusion/frustration from the guest.

Who wants a roller coaster ride on Hagrid's motorbike?

Santa goes for a wild ride in Disneyland parade mishap