December 19, 2018, 1:30 PM · Disney has a long history with professional sports leagues in America, including a stint as owner of Major League Baseball's Angels and the National Hockey League's (Mighty) Ducks. Disney's ESPN is the world's leading sports broadcaster, and Walt Disney World's Wide World of Sports complex has hosted countless events, including spring training games for baseball's Atlanta Braves and preparations for the annual NFL Pro Bowl. Disney also is the current jersey sponsor for the NBA's Orlando Magic.

And next summer, Disney will introduce its first pro sports-themed attraction, the NBA Experience at Disney Springs.

Built on the site of the former Disney Quest attraction, the NBA Experience will feature a variety of experiences designed to make visitors feel like a player in the world's most popular pro basketball league. 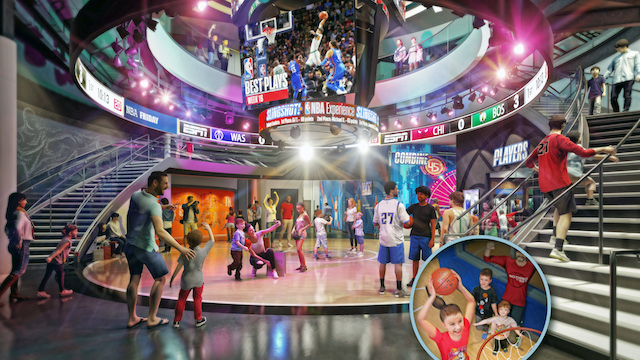 Attractions within the indoor experience will include interactive games (from the old school Pop-a-Shot to modern video games), photo ops including walking across the NBA Draft stage, trivia contests on NBA and WNBA history, and several skills exercises, including a replicated NBA Combine challenge, a ball-handling and dribbling clinic, and an opportunity to try your best slam dunk... on a basket with an adjustable height, of course.

The NBA Experience opens next summer in Disney Springs. No more specific opening date just yet, nor any word on admission cost.

Catch one of our recent podcasts for in-depth discussion on the use of pro sports themes in attractions:

Getting in the game with sports-themed attractions

I would pay good money for the "NBA Alternative Reality Experience," where the Indiana Pacers never trade for Tom Owens, keep the second pick in the 1984 draft, pick Michael Jordan and go on to win multiple NBA championships.

The success of this attraction is going to come down to price. I'm not sure how they should work it. It doesn't sound like there's enough to do here to warrant the use of the "Plus" admission like Disney Quest did, and there doesn't seem like the number of unique games/attractions to require a player card like Dave and Busters or the old ESPN Zone. I'm wondering if perhaps they charge a set admission for guests just wanting to play (perhaps $10-15), but allowing guests who buy a meal in the restaurant free play on select attractions with a small upcharge to play everything.

However, as with everything that's opened at Disney Springs over the past couple of years, I don't expect them to keep their planned summer opening. In fact, based on some of the recent Disney Springs ventures (like The Edison and Wine Bar George), I wouldn't be surprised to see DHS's Galaxy's Edge open before this place does.

Does anyone actually have any interest in this? Honestly? I'd rather watch a game, or if I want to experience the next best thing to playing a game then I'd... play a game of basketball. But maybe I'm not a big enough sports fan to understand this.

Is there a NASA moon landing denial conspiracy theory section?

You'll find it if you walk all the way to the edge of the flat Earth.

Although there has been NBA city and Nascar at Universal studios not to mention the All Sports themed restaurant chain as well as the current NFL experience in NYC, if this well received, an NFL, MLB, NHL themed restaurant may arise.

Is this a restaurant as well? ESPN Zone made sense to me. Watch a game and enjoy some good food. That sounds like a good time. What is this exactly? A NBA themed arcade?

And on that note I'd like to add, I didn't understand the appeal of Disney Quest either. Why would you want to virtually go to an amusement park, when you're at Walt Disney World where you could literally go to several of the world's best amusement parks in person for real? And based on the success of Disney Quest, I'd say I was not in the minority with that opinion. So, sure mock me for asking the question, but you could try selling me on this instead. What is the appeal here, when I could spend my time and money either watching a real life NBA game or playing a real life basketball game?

Yep. It's an NBA-themed Disney Quest.

The far west side of DSTP is going to be a strong draw. Not only will this new NBA attraction continue DSTP's extraordinary success, the new Cirque show and Jaleo restaurant along with mainstays Splitsville and House of Blues will make the west side of the park both metaphorically and literally jump.

This would have been the perfect location for an east side version of the amazing California base Walt Disney Family Museum but I guess Disney doesn't want to remind guests we are at Walt Disney World.

Yeah I'm with AngryDuck. I'm genuinely confused in that idk who wants this. I enjoy sports but I don't get it, let alone why this is helping Disney Spring "be a strong draw". My own friends who go to games, watch them on TV, or actively play mostly respond "oh.. um ok".

To be clear, I'm not trying to say this was a good idea or a bad idea and this may simply not be my thing. I personally thought the Void Experience was whatever but I at least got the draw to that. I don't know who the target customer is here.

I'm not sure why there is so much negativity about this. WDW is in need of a sports bar experience (the small and out-of-the-way ESPN Club at BoardWalk is about it right now) and this should fill that need. Add in some fun, unique games ala Dave and Busters and I think its a winner. My only concern is that this place is going to take up a lot of real estate. I would think that there could've been more put in place of the old Disney Quest in addition to this.

The NBA Experience WILL include a restaurant, per the Disney Park Blog: “The state-of-the-art space will include interactive games and competitions, immersive experiences, a retail store and an adjacent restaurant.” An all-in-one experience is a good one, like a Splitsville, Top Golf and Andretti’s. This is a very good addition to Disney Springs and I hope the food is delicious.

@garybg: My thoughts exactly. This looks like a great place to watch sports and have a little fun. Looking forward to this!

Universal Orlando gets into the dessert party game