Universal Orlando is accepting reservations for its newest hotel

January 16, 2019, 12:38 PM · Universal Orlando this morning revealed the opening date for the second phase of its Endless Summer value-priced resort.

Universal and its partner Loews Hotels are now taking reservations for Universal's Endless Summer Resort - Dockside Inn and Suites, which will start accepting guests in May 2020. Prices start at just $89 a night for the budget-priced hotel, which is going up on the site of the former Wet 'n' Wild water park.

Dockside's sister hotel next door, Universal's Endless Summer Resort - Surfside Inn and Suites, will open this August. Reservations have been available for that hotel for a few months now, with its rates starting at $85 a night. These promotional rates for both hotels are based on a four-night stay.

The two Endless Summer hotels together will offer a total of 4,000 rooms, including 1,450 two-bedroom suites. That brings the total number of hotel rooms available at the Universal Orlando Resort to more than 10,000, reaching a major benchmark in NBCUniversal CEO Steve Burke's vision for the resort. 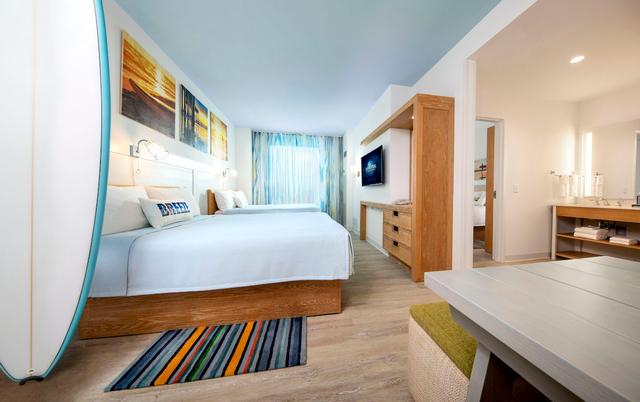 I will reiterate that these rates, if they stay this low, are pretty amazing. Now that Disney is charging guests to park at their hotels (negating the benefit of free parking at the theme parks for resort guests), I could see more and more budget-conscious guests spending an entire week at these new resorts and using them as a home base for their entire vacation to WDW and UO. EMH and early FP+ access is not worth paying an extra $20/night if you are an experienced WDW visitor, and Loews consistently delivers higher quality stays than Disney's value resorts. My only concern with these resorts is the amount of time and frequency of buses to and from the parks, and if they will create a more direct walking path from these new hotels to the theme parks and CityWalk.

Hard to consider anything on that stretch of I-Drive as on-site when they're clearly not at Universal Orlando Resort any more than the old Wet n' Wild Orlando water park site was. They're Loews operated like the rest of Universal Orlando's resorts and Universal owns them and should be a good value. But they'll be stuck on I Drive with all the congestion and noise and real world surroundings that implies, not within that theme park destination resort itself. Different kind of option, similar to what Oriental Land added for their Tokyo Disney guests recently that is also not truly "on-site" either.

IDK Dave - I-Drive has its advantages with the variety of dining options if you don't want any of the choices in the parks or CityWalk. When you stay at WDW, you're stuck with what's at your immediate resort, or are resigned to hopping on a bus to Disney Springs or another resort, which can be an expensive and/or time consuming proposition. These resorts are clearly targeted at the value market (those guests that will typically stay at All Stars, Pop Century, or an off-site chain hotel), and considering the price point and perks (free transportation and early entry to UO), these resorts will be quite competitive for that particular demographic.

As far as noise, I don't see how that's going to be an issue. Based on drawings and depictions of the resorts, all of the guest areas will be behind walls or have a significant offset from the surrounding roads. The noise from the rooms at these resorts is probably not going to be any different than what you get from an I-4 facing room at RPR, SF, or Aventura.

@Dave: I missed the part where anyone said these were "on-site"