Top designers have been blurring, if not erasing, the lines between different attraction types for years. We've got traveling motion base theaters on dark ride tracks, roller coasters with show scenes, and even live musical performances and character meet and greets in pre-show areas now. And soon in Asia, a new theme park will offer another flavor of theme park attraction mash-up.

A dark ride and a stunt show.

Road Rage, designed and produced by California's Legacy Entertainment for the upcoming Trans Studio Bali theme park in Indonesia will be "the world’s first 'Stunt Show Dark Ride,' in that it will break new ground with its integration of live performers and high-octane stunts," Legacy said in a press release. 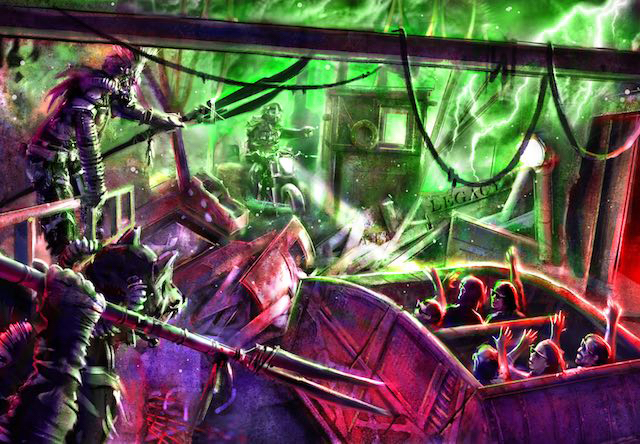 The ride system will feature motion base vehicles from Oceaneering, which has provided ride systems for Universal's Transformers, Six Flags' Justice League, and SeaWorld's Antarctica rides. The attraction also will feature an original musical score by Benoit Jutras, who is best known for his work with Cirque du Soleil. He also composed the score for Six Flags' Glow in the Park Parade, which was produced by Legacy Entertainment's predecessor, The Goddard Group.

Road Rage is now under construction, for an as-yet-unannounced opening. 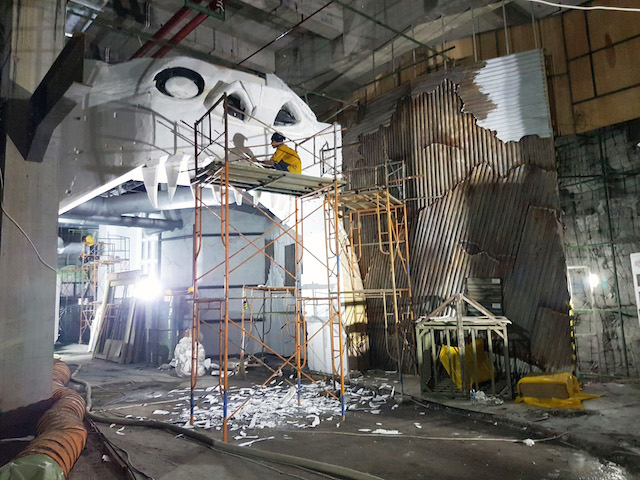 This won't be the first dark ride to include work by live performers. Walt Disney World's old The Great Movie Ride featured live hosts, who eventually ended up performing on show stages outside the ride vehicles. And Disney has been known to send visible cast members and live actors into show scenes on other dark rides, as well, either for security purposes or to promote new movies.

But Road Rage is the first attraction that I've heard of that will feature live stunt performers in show scenes on a dark ride as part of its normal operations. Legacy promises more information about Road Rage and other attractions it is developing for Trans Studio as work on the new parks continues.

My mind is reeling with questions! How quickly will cars cycle through scenes? How many stunts will an average performer have to perform per shift? Will this turn into another "Spider-Man on Broadway" debacle? I'm looking forward to learning more!

I am thinking that they could do this like SeaWorld did with Antarctica, where several ride vehicles come together in one room for a show sequence, before going on through the rest of the ride.

Didn't Disney already do this with The Great Movie Ride? It wasn't a full blown stunt show, but there were live scenes acted out by performers in the middle of the attraction.

To use actual stunt performers and live sets will be difficult to accomplish an acceptable throughput without having to employ dozens of stunt doubles. Under most situations, stunt performers only actually perform a couple of hours per day in a full-day's work. If you're going to have a continuously loading dark ride, you will need at least 2-3 layers of performers (one performs every 2nd or 3rd cycle) that would then need to be rotated out every 2 hours or so. Even if you have a performance that only has 2 live characters, that would be a cast of at least 2 dozen or more qualified stunt people and probably even more to be understudies and support. That's a lot of labor, which means a very high operational cost for a ride that's likely to have an already high construction cost. This really doesn't make a whole heck of a lot of sense. T:2 was really the pinnacle of stunt performing combined with a traditional theme park attraction (3-d movie), but without the need to support the continuous load/operation of a traditional dark ride, Universal was able to operate the attraction with a much smaller stunt cast.

The closest comp I can think of here would be a traditional halloween maze/haunt. Some parks now employ stunt performers in their mazes (typically bungee performers), but those actors rotate very frequently, and are only "on-set" for about an hour or two per night with at least 4 actors rotating in over the course of a 6-8 hour event.