It's time to play, at Legoland Florida's The Lego Movie World

March 26, 2019, 8:26 PM · The Lego Movie surprised Hollywood in 2014, grossing more than a quarter billion dollars in the United States alone and reminding everyone why Lego remains one of the world's most enduring brands for children.

Of course, plenty of grown-ups love Lego, too. The Lego Movie rewarded them for making their way to the theater with a surprisingly thoughtful story about play, commerce, and the conflicts between them. But when The Lego Movie made the kind of bank that it did, I suspect that there was exactly zero conflict within Merlin Entertainments about bringing The Lego Movie to its Legoland theme parks.

And now, The Lego Movie World is here, debuting to the public tomorrow at Legoland Florida. No, The Lego Movie World is not as deep as the film. But the kids at whom this land is aimed won't notice that. This is a children's land in a children's theme park. And there are no better theme parks aimed at elementary-aged children that the Legoland parks.

The two-acre Lego Movie World replaces The World of Chima land that opened in 2013. There's a retheme of The Quest for Chi Splash Battle ride, but the rest of this land is new, including Legoland's first-ever flying theater ride. We'll get to that in a bit. But first, the rest of the land, which is meant to evoke the city of Bricksburg from the film.

Let's start with the tallest attraction in The Lego Movie World, Unikitty's Disco Drop. Standing over the land's entrance, the cutest thing about this tower ride is the screen of Unikitty's face at the top, which changes expression as riders fly up and drop down.

That rethemed Splash Battle is now Battle of Bricksburg, where riders take aim at the Duplo aliens that have invaded the city. 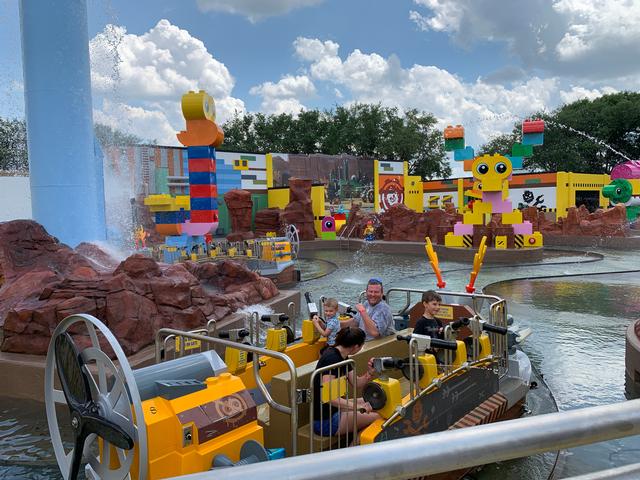 Duplo is Lego's toddler brand, but there is no fiercer fight among children than that to show they are not toddlers any longer. Legoland plays with that need while finding ways to bring the family together, nevertheless. And getting good and soaking wet playing in the water appeals to kids of all ages.

Hungry kids and their parents ca refuel at Taco Everyday!, since everyday is Taco Tuesday in The Lego Movie World. (If you're lost here, Taco Tuesday is an ongoing gag in the film.) Legoland served each invited visitor at the media preview today their choice of chicken of "krab" taco. (Brisket also will be available.) 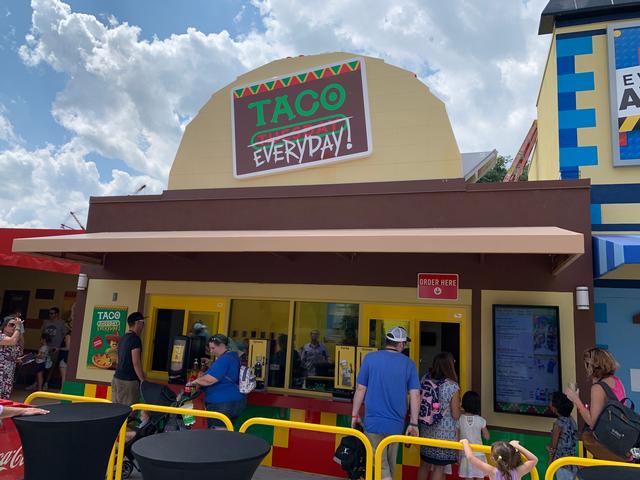 I chose the chicken, served on a soft corn tortilla with pico, vegetable slaw, and cotija cheese. Living in LA, I think it's grossly unfair to compare theme park tacos to what I can get from trucks around my city, but this one was fine. (Snack-sized media-day food also often bears only a passing resemblance to what gets sold later.) Two-taco plates will cost $11, with the three-taco version going for $14.

The highlight of the new land is that flying theater ride, The Lego Movie Masters of Flight. You board Emmet's three-story "Triple Decker Couch" for your flight through scenes inspired by the film, where even the fire and the water look like they were crafted from Lego bricks.

I loved the quotes from Disney's Flight of Passage, as well as a few Minion Mayhem-inspired scenes. Lego are a medium rather than a narrative, so it just makes sense that Legoland would build something that draws upon a variety of inspirations, when given this chance. That's the sense of creative adventure that made The Lego Movie such a huge hit. It's nice to see that The Lego Movie World has't forgotten it, either.

Update: March 27 Here is this morning's grand opening ceremony from the park, featuring a performance of "Catchy Song" from The Lego Movie 2 by That Girl Lay Lay.

This looks like a quality product by Legoland standards. I really wondered why they bothered building the Legend of Chima area at all when it was already clear that Lego Movie was a huge hit. In my opinion, they waited too long. The sequel wasn't nearly as successful. So...did they add more targets on the boat ride? That was my biggest problem with it. The left side was a real snoozefest.

This is an excellent review, Robert. Is there enough to do in Legoland Florida to make it worth a visit for adults without children?

@Brian_from_Florida - I know your question was directed at Robert, but in my opinion there is not enough there for childless adults to make it worth a visit. Many of the attractions have height limitations or only allow you to ride with a child present. Perhaps when they add some more substantial attractions in a few years.

I will have another article on the rest of Legoland Florida this weekend, but I would endorse a visit for an adult theme park fan to see Cypress Gardens, the water ski show, a couple of the coasters, the shooter rides, Masters of Flight, and Miniland.

This is a two-day park with kids, but a grown-up without kids can do everything worth doing for them in one.

I actually did visit Cypress way back in 1984 to enjoy it nicely. It's fun to see how it's been boosted thanks to the Legoland popularity and deserves as much attention for a nice afternoon.

Universal revives an annual pass option; but is it right for you?