April 1, 2019, 4:22 PM · We've been telling people for months now that the easiest way to get on Flight of Passage at Disney's Animal Kingdom is to wait until just before the park closes to ride. Flight of Passage is the toughest "get" on Walt Disney World's Fastpass+ ride reservation system and the stand-by wait for the ride in Pandora: The World of Avatar routinely runs between two and four hours... or more in busy seasons. Even those who "walk on" at rope drop have to show up at least an hour in advance of the park opening to do that.

But if you wait to enter the queue until just before the park closes, you will find the line speed up considerably. Disney does not book Fastpass+ return times for after park close, so once the Fastpass+ return line clears, the ride's full capacity turns over to the standby queue. With many visitors calling it day long before close, fans often can get on Flight of Passage at closing with less than an hour's wait.

But what to do in the park until then?

I can imagine Disney executives asking that question in a meeting somewhere, with an eager junior manager exclaiming, "I know! How about another upcharge dining event?"

And so... now we have "Circle of Flavors: Harambe at Night," a $125-plus-tax for adults and $99-plus-tax for children progressive dining experience in Disney's Animal Kingdom. Bookings open tomorrow for annual passholders and DVC members and Wednesday for everyone else. The event starts July 24 and yes, you have to buy your way into the park, too. This is not an after-hours event.

So what do you get for the money? The event will begin at the Wildlife Express Train Station with music, snacks and drinks (including alcohol, thus the pricey price). You'll ride to Rafiki's Planet Watch for photo opps with Timon and Rafiki, plus more snacks and drinks. Then it's back on the train and over to Harambe Market for the main course of "an array of sweet and savory dishes paired with unique beverages."

Disney did not provide a menu, but did release a promo photo of the food which included shrimp, steak, and some desserts. 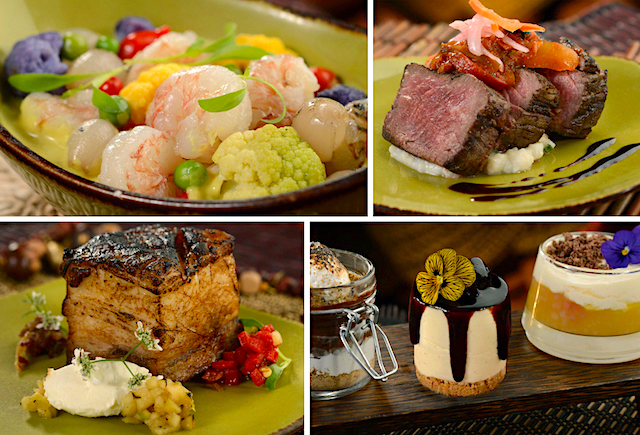 Reservations will be available by calling +1-407-939-3463, or by visiting Disney's website after Wednesday.

This seems really neat! I like this type of dining experience though it's expensive. This strikes me as a fun experience for a special occasion.

Though I thought every day at Disney was a special day so idk why this sounds neat to me.....

And of course the Drones will line up in droves to gleefully hand over more money. I can't believe Disney can get people to pay these kinds of prices (non-refundable too) for a brand new event that doesn't have a menu yet, or even an idea of what cuisine will be served.

There's also no information provided here to indicate the timing of this event. If this requires a full round trip journey on the train (and likely at least 30-45 minutes at Rafiki's Planet Watch), you're probably looking at an event that will take upwards of 3 hours or more (that's a lot of lost park time IMHO). Assuming the event starts at 5 or 6 PM, there might not be much time left in the operational day to sprint for a last minute ride on FoP. This really seems more geared towards the Disney foodies, which makes the lack of a menu here an odd decision. I get that the Disney Culinary team probably doesn't want to commit to a set menu this far in advance, but if you're asking guests to pony up $125/person that's a lot of blind faith for a brand new event.

What is the verdict on Alton Towers' new Dungeon?