May 17, 2019, 5:33 AM · From the ashes of the Apocalypse rises Firebird. That sounds like the tagline for the latest summer blockbuster, but instead summarizes the debut of the new floorless roller coaster at Six Flags America. At the end of last season, the Largo, Md. park announced that the park’s Bolliger and Mabillard (B&M) stand-up roller coaster was being retrofitted with floorless trains for the 2019 season. Thus, the park brought an end to Apocalypse and the rise of Firebird. 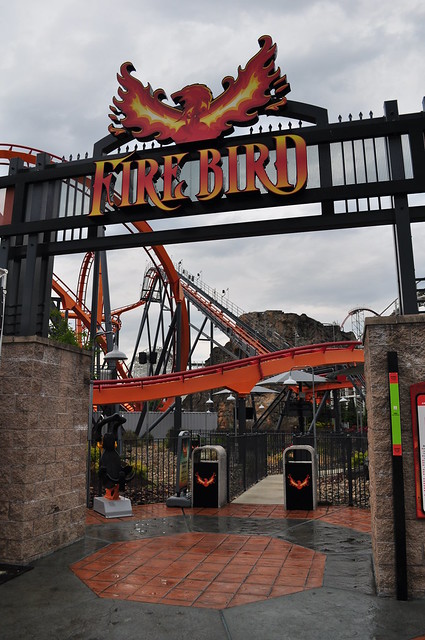 What many guests to Six Flags America might not know is that Firebird is the second reincarnation of the same B&M coaster track. Prior to being Apocalypse at Six Flags America, this coaster was known as Iron Wolf at Six Flags Great America. Not only that, but the coaster was the very first B&M roller coaster ever installed. It’s true — the Swiss manufacturer that has become a major player with more than 100 coasters installed around the world can trace its genesis to the former stand-up coaster originally installed outside of Chicago. That means even as a “new” floorless roller coaster, Firebird stands as a unique piece of roller coaster history.

Cedar Point completed a similar stand-up to floorless conversion a few years ago when it changed Mantis to Rougarou. The result there was a coaster that has a much higher capacity with a less complicated and time-consuming loading process, but a ride that was not all that different aside from having slightly less painful restraints and a more comfortable riding position. Firebird’s conversion from Apocalypse has similar features to Cedar Point’s conversion. However, a notable change is that the new floorless trains on Firebird have only six rows of seats compared to the seven that were found on Apocalypse/Iron Wolf. While I didn’t notice a big difference with this change during the damp media preview day, the theory is that trains go through elements slightly faster, reducing hangtime and increasing positive G’s. 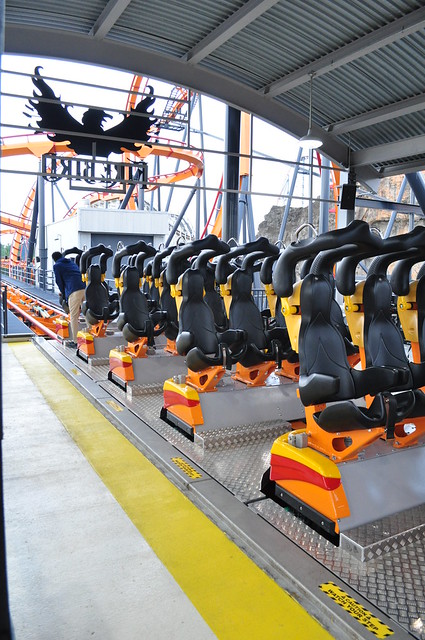 As with Rougarou, guests will not find the new generation of over the shoulder restraints on Firebird like those on Banshee, Gatekeeper, and other new B&M coasters installed over the past 4-5 years. Because of the gauge of the existing track, the newer restraints could not be fitted to the narrower trains. This means that guests with larger chest and upper body measurements will need to seek out the seats that have the double seat belts near the middle of the train. 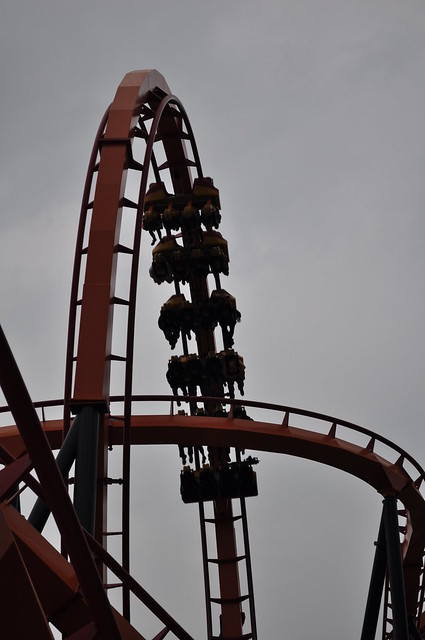 While the rise of Firebird may not be a major investment in Six Flags America, unlike the millions (or even billions) that other theme parks are spending this year on new attractions, it does breathe new life and interest into a roller coaster that guests could practically walk on even on the busiest days. The fact of the matter is that Six Flags America is not going to be given the resources of bigger parks like Magic Mountain, Great America, and Great Adventure, but smart additions and modifications like this are what will drive success at the park. 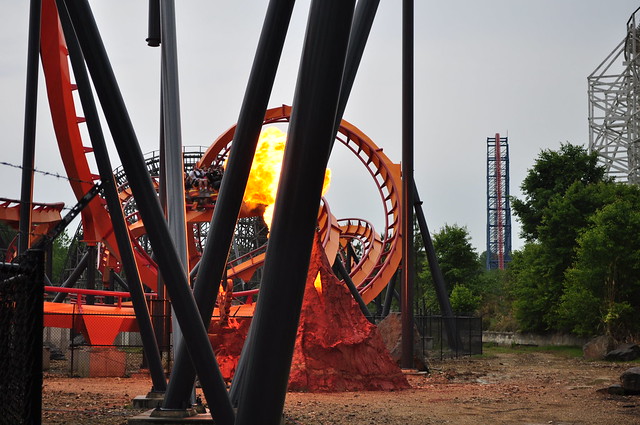 The ride on Firebird is an improvement over Apocalypse, but judged against more modern floorless coasters with more inversions, airtime, and steeper drops, Firebird still feels subpar. Also, there are still a couple of transitions between elements that induce some headbanging. Compared to Rougarou, I think Firebird stands as a more significant improvement over its previous incarnation. While it isn’t a must-see new attraction for 2019, Firebird rising from the ashes of Apocalypse still represents a modest addition for a humbler and more financially limited theme park.

Now men can ride in comfort without fear of qualifying to join the Unsullied!

Great article! I have to admit even though I'm right in the middle of both KD and SFA I never count this one as my home park, especially since I only go when my nephew drags me there. Good to hear that there's even the slightest improvement than before and not as headbanging as Rougar-ouch.

Having ridden both Patriot and Rougarou pre and post conversion, the process seems to result in a minor improvement in ride quality, though not enough to really shift its position significantly compared to other coasters. After my ride on Apocalypse last year, I crowned it as my least favorite B&M coaster, but perhaps the conversion improves the experience enough to bump it above the second worst (Vortex at Carowinds). I'll definitely check it out the next time I wind up visiting SFA. It does seem superfluous given that there are three superior floorless coasters in the region (Bizarro, Dominator, and Hydra), but if it increases popularity and guests enjoy it then it's a win for the park.

Where is Fiero? And Supra? And NSX? Come on guys! Don't stop at Firebird.

The fire effects are pretty impressive. I have no basis on which to compare before and after versions, as I cannot ride standup coasters for medical reasons, but Rougarou struck me as meh. @AJ Hummel - I'm delighted to hear that you find Hydra superior to something. Hydra, in my neck of the woods, has been dissed more times than I can count and I don't think that there's anything fundamentally wrong with it. It's not great by any means but is perfectly acceptable.

To be honest Bobbie, a Slip 'n Slide would have been an improvement over the coaster that Hydra replaced (Hercules), so it didn't have much of a bar to clear, which may be why its design is not all that inspiring - though it is probably one of the most unique floorless layouts aside from Superman: Krypton Coaster at SFFT.

I regret not having ridden Hercules before it became brutally rough - I didn't take up coasters until 2010 and by then it was long gone - although from what I can see in a video, the turn coming off the initial drop was much too sharp even for a coaster in pristine condition. What always struck me as interesting is the litigation involving Hercules & Texas Giant.

Trust me Bobbie, Hercules was ALWAYS rough. Any roller coaster that has trim brakes on its main drop has serious design flaws. Also, it wasn't the steepness of the turn, but instead the length as trains maintained speed throughout (similar to Intimidator 305 minus the greying out).

I first rode it back in the mid-late 90's, and it was already intolerable then (debuted in 1989) - I joked that it was the perfect coaster for anyone in need of a chiropractic adjustment, and was by far the roughest roller coaster I have ever ridden (worse than Vekoma SLCs, Mean Streak, and The Boss combined).