Can you feel the love for Disney's new 'Tale of The Lion King'?

June 7, 2019, 3:00 PM · Part of the reason why theme parks such as those at the Disneyland Resort can welcome 10 million visitors a year (and more) lies in their ability to entertain people throughout the park, and not just in rides and show theaters. Disney California Adventure today debuted another of those "plus" experiences that probably won't draw many people to the park by itself, but most certainly will reward those who do visit and take the time to watch.

Tale of The Lion King is playing several times daily this summer in the Paradise Gardens Park, better known to DCA fans as the World of Color Fastpass viewing area. As the name implies, this is yet another retelling of Disney's quarter-century-old The Lion King franchise, now getting the "live action"/photo realistic animation/reboot/remake (pick one) treatment with Jon Favreau's film hitting theaters next month.

Surely, Disney is hoping for some of its beloved promotional synergy by adding fresh Lion King-themed entertainment to its parks around the world this summer, this production included. But there's the secondary motivation of providing Disney fans in Southern California a weightier critical mass of reasons to come over to Disney California Adventure this summer, instead of making 2019 "Galaxy's Edge or Bust" at the resort.

At 22 minutes, Tale of The Lion King runs longer than almost all the other attractions you can find around Disneyland and California Adventure. Presented in "story theater" style by an 18-member "Storytellers of the Pride Lands" troupe, this is far more intimate production than what Disney has employed for Frozen and Aladdin over in Hollywood Land's Hyperion Theater. Yet it reminds that Disney, at its best, is a company of theater geeks who love nothing more than to put on a show. 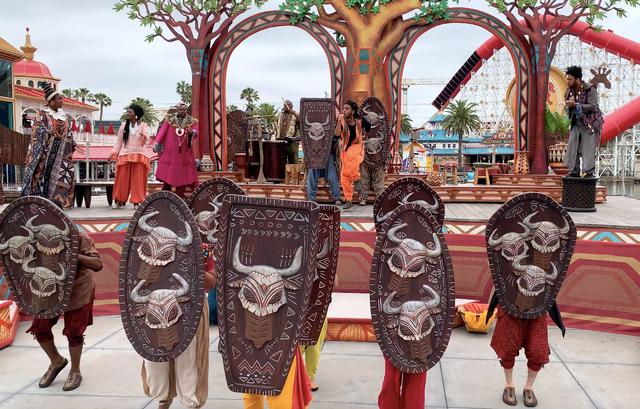 Leads narrate the story and step into roles, allow the show to breeze through all the big plot points and perform fresh arrangements of its hit songs in those 22 minutes. Disney has laid an Afrobeat style over the original Elton John and Tim Rice songs, amplifying Disney's recent efforts within California Adventure to provide moments of diverse cultural experiences along with all that Disney IP.

Kids up front get a moment to dance with the cast, the spectacle's just enough to draw people off the pathways for a few moments and I am sure that the songs will plant the suggestion of "remember The Lion King" in people's brains as the rest of Disney's PR machine fires up to hype the new film. But the show works on its own, too, rewarding those who show up early enough to get an unblocked view up front to see and experience the whole thing.

Tale of The Lion King will play through the summer at Disney California Adventure. Check the park schedule for specific showtimes.

I actually like the intimacy and originality of this show better, but that also might have a lot to do with FotLK being SO familiar at this point. (Remember, it's basically a plussed, fixed-site installation of an old Disneyland parade, too.) FotLK wins for being a sit-down, indoor experience, of course, but I think that this new show refreshes the franchise nicely.

Universal to use virtual queue for new Hagrid coaster