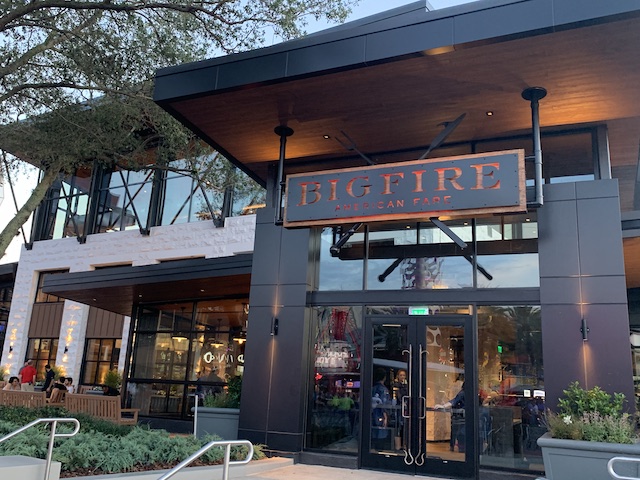 Keeping with Universal's recent hospitality design aesthetic, the look is modern throughout, though built upon wood and painted brick, with tartan on team members' attire to lend some suggestion of a cozy mountain retreat. On the menu, food-fired meats and vegetables dominate, though they are presented with a contemporary take, as Universal Orlando's Executive Chef Steven Jayson explains while talking us through the menu.

As a media preview, we were served tasting samples of several items on the menu, so I can't draw any conclusions about value, as we know neither the true portion sizes nor their prices. 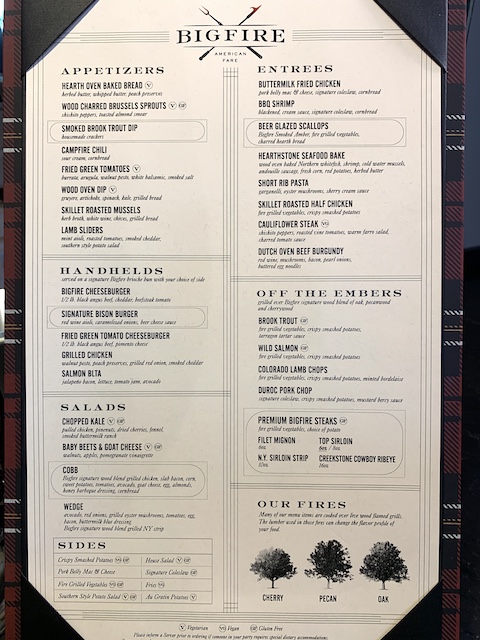 My favorites from the menu sampled tonight included the Campire Chili, Lamb Sliders, Baby Beets and Goat Cheese Salad, the Brook Trout, and Colorado Lamb Chops. Top sides were the delicious roasted Brussels sprouts and the Pork Belly Mac & Cheese. The chili was pure comfort food, but the other items offered welcomed flavors not typically found within theme park resorts. I'm a sucker for tarragon and I love trout, so that was an easy hit for me. But the lamb was spectacular, rich without being gamey, and well-paired with its sauces, in both the chop and on the slider. 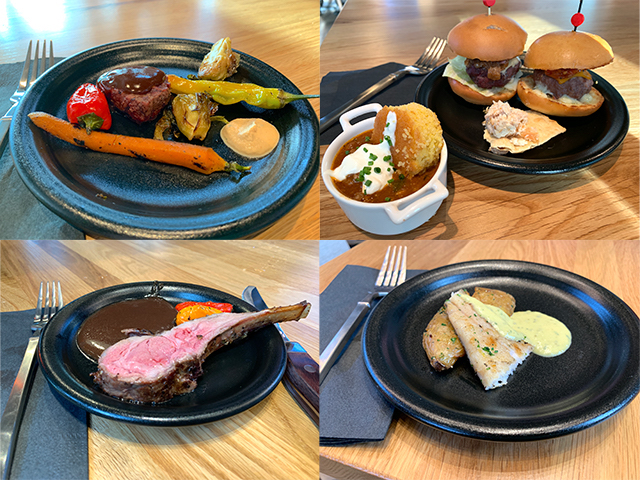 Clockwise from top left are a filet mignon with grilled carrot, Brussels sprouts and Shishito pepper; Campfire Chili, Smoked Trout dip, and the Bison and Lamb sliders; Brook Trout with Tarragon sauce and smashed potato; and the Colorado lamb chop, with minted Bordelaise and roasted peppers.

While the focus here lies on fire-grilled meat and vegetables, the salad with roasted golden beets was exceptional, proving that herbivores can enjoy the benefits of open-fire cooking, too. I hope that the value play here allows fans to support items such as Bigfire's lamb and trout (and those beets!), as I would hate to have lost Emeril's for yet another menu of the same beef, chicken, and potatoes served at countless other restaurants. There's great potential here, but both Universal and its fans will have to agree to pursue it.

WOW! Nice concept and the food looks great. Looking forward to a visit.

I want to try EVERYTHING hahahaha

Also, Robert, I lnow you'll be in Orlando tuesday for Hagrid's Coaster media event, will you stick around for the official opening Thursday?

I know this is off topic, but is it true about the Fastpass tier changes for Hollywood Studios, starting August 29th?

Yes @80sman - All "rides" move to Tier 1 except for Star Tours, while "shows" (Fantasmic!, Indy, Muppets, etc...) stay at Tier 2. That means you cannot hold FP+ reservations for ToT and SDD at the same time like you can now. Smuggler's Run won't be on FP+ at all (as well as RotR when it opens).

I would expect LONG standby lines at all of the DHS attractions this fall. I think Disney might be trying to force more guests into standby lines for other attractions around the park to keep them from flooding Galaxy's Edge while waiting for FP+ windows to open. However, what I think will happen is that with just 1 "good" FP+ attraction allowed ahead of time, most guests will bee-line straight for Galaxy's Edge and stay there, making their lone Tier 1 FP+ reservation for later in the day (counter to current strategies). Guests that show up too late to make it into Galaxy's Edge (it will inevitably close for capacity at some point within the first hour of rope drop pretty much every day) will get relegated to the standby lines throughout the rest of the park. It's going to be interesting to see what happens in DHS since they will not be doing a "soft open" reservation period like what's happening right now in Disneyland.

Thank you for the confirmation and details, Russell. It sounds like this new system doesn’t benefit guests at all, and will just cause a lot of frustration. I can imagine that I’ll be making good use of those EMH days at DHS, next year!

It's not clear how long this tiering arrangement will stay in place, especially since they just readjusted the tiers last fall after TSL crowds mitigated. There's also the big unknown as to when the Galaxy's Edge rides will open their FP+ queues, which will likely change the tiering again. MMRR could also change the tiering at DHS when it opens next year, or maybe Disney decides that with so many top level attractions in one park that they can eliminate the tiers altogether like they've done at MK. It's definitely causing frustration with guests trying to plan strategies to visit Galaxy's Edge and still enjoy some of the highlights at DHS without having to wait in lots of standby lines. This is one of the many reasons we've chosen to visit Galaxy's Edge at Disneyland first, and are holding off another trip to WDW until things settle down a bit.

@Russell, it’s going to be interesting, to say the least. When I get to Orlando next, GE will have been open for 6 months, so there could well be various changes implemented during that time, to make things run smoother. What I do know, is that I’m preparing myself for, at least, a couple of early mornings or late nights, in DHS.

@Chad Although I am going there for the non vegeterian options (sorry Arby's, it's Bigfire who has the meats) they have some interesting vegan things, especially regarding the wood-fired vegetables and a really tasty looking "cauliflower steak".