Disneyland cast comes together for its annual canoe races

August 6, 2019, 11:26 PM · One of the best shows of the year is running at Disneyland this week, but you would have to be a Disneyland cast member to see it.

Disneyland is hosting the finals of its annual cast member canoe races in the early mornings this week, before the park opens to guests. More than 80 teams competed in four divisions this year, paddling the way around the Rivers of America over the past eight weeks. The top six teams in each division were slated to paddle Tuesday and Wednesday morning to determine the overall winners. 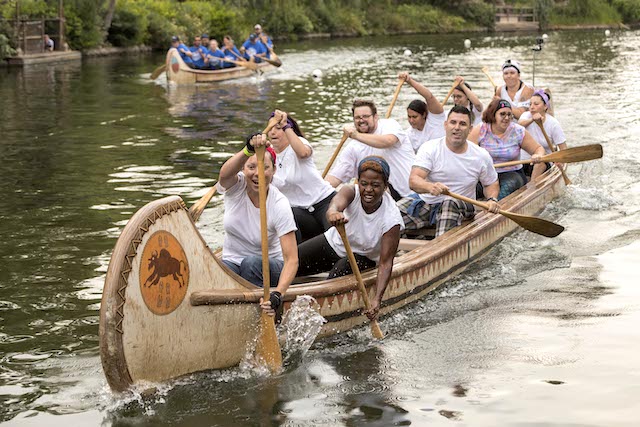 Cast member canoe races have been a long-time tradition at both Disneyland and Walt Disney World, where I competed on the Magic Kingdom West Attractions team back in the day. Despite having a supposed "home river" advantage as the cast members who ran the Magic Kingdom's canoe and river attractions, we got destroyed in our heats.

Turns out that experience leading park guests on a leisurely trip around Tom Sawyer Island doesn't help you paddle a one-ton canoe around that island in the fastest possible time. A bunch of wiry young attractions hosts and hostesses whose most strenuous bicep curls involved lifting a full can of beer are no match for third-shift maintenance guys who actually work out when they're off the clock. Who knew?

Still, it was great fun. As a cast member, it was nice to be part of something inside the parks that was just for us — even if it left us dog-tired and soaking wet. It's also great to see managers and back of house cast members out in the park with on-stage cast members, all working together to haul their way around the river faster than the next team.

Even the top brass shows up. Disneyland President Josh D'Amaro was out on the river paddling this morning, posting highlights to his Instagram story.

So if you're in the park early Wednesday morning and you see cast members who look like they've just come from a big workout, well, maybe the have.

Update: Congratulations to the overall winners, the Oarlords, who completed their lap around the river in just over three and a half minutes!

The Canoe Races were one of my favorite things to participate in while I worked for Disney (in CA) in the late 80s and 90s. We were a team made up of artists from the Disney Studios in Glendale, so it was quite an early morning to get to the Rivers of America in Disneyland by 5:30. Back then there was no Downtown Disney or DCA, so we could park right behind Pirates of the Caribbean. Our biggest success was to win the Sprints one year - which is the crazy 'drag race' for the teams that weren't the top 8. Nice consolation prize! We always assumed that the "Canoe People" (the cast members that ran that attraction in the daylight hours) had the inside scoop! Strange to hear that wasn't necessarily the case. However, the best part was arriving at the park before dawn, "sneaking" through the cast member entrance behind the Frontierland Train Station and entering the park feeling like the only person there. The only other inhabitants were the occasional landscape crew getting the place ready to open in a few hours and lots of noisy crows. That place is alive even when empty. I moved to the studio in WDW in the late 90s but wasn't able to participate in the Races there. Sure wish I would've. Maybe we would've raced! Thank you for the trip back in time, Robert!