What's new and worth trying at Epcot's Food & Wine this year?

August 29, 2019, 2:52 PM · After the D23 Expo in Anaheim and the Star Wars: Galaxy’s Edge media event at Disney’s Hollywood Studios, let’s keep our Disney week going! So it’s off to Epcot today for the opening of the 2019 Epcot International Food and Wine Festival.

With more than 30 marketplaces and hundreds of selections, we decided to focus on some of the new options at this year’s festival during our visit today. 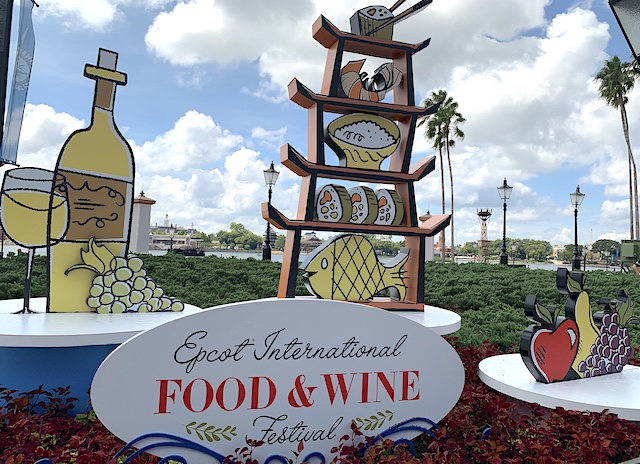 We started the day at the festival’s new marketplace for 2019 — The Alps. Featuring Swiss favorites, the marketplace is serving warm Raclette cheese with baby potatoes, Cornichons and baguette slices, venison stew with crushed potatoes, and a blueberry and Frangipane tart with Crème Fraiche and almonds. 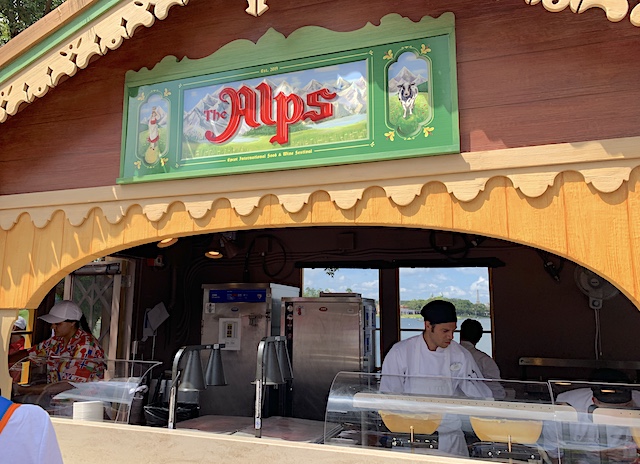 So of course, we ordered them all. 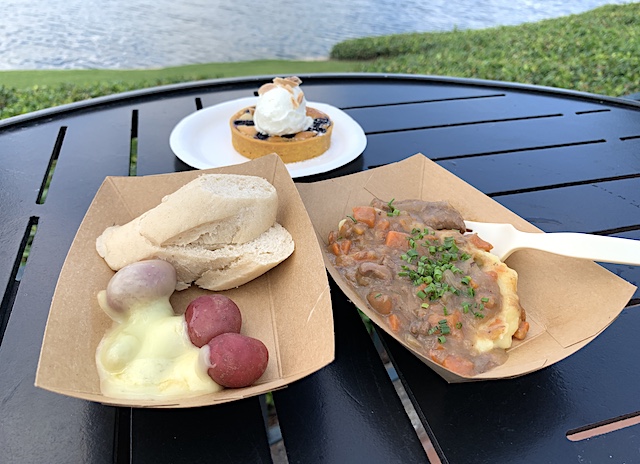 The tart [$4.50] is the star here — a delightful pastry with a nice blend of almond and blueberry flavors that refresh your taste buds without beating them down with cloying sweetness, as too many theme park desserts do. I also enjoyed the stew, which offered nice meaty flavor. But with just one noticeable chunk of venison, there wasn’t much substance here, even with a $6 price.

While I enjoyed watching the servers scrape the warm Raclette [$5] from the wheels of Swiss cheese on the counter, the meager portion here also didn’t do much to thrill me. The baby potatoes were nice, but the two pickles were buried under the cheese, which cooled quickly, losing much of its appeal.

If people of The Alps were being a bit parsimonious this morning, leave it to the hosts in Italy to revive the party. The festival’s Italy pavilion is offering an all-new menu this year, including Ravioli Carbonara, Costine di Maiale (Balsamic-glazed pork ribs), crispy chicken with Marinara, Sicilian cannoli, and a Chocolate-Hazelnut cake on a stick.

Pacing ourselves, we skipped the cake, but ordered one of everything else. And that was more than enough. 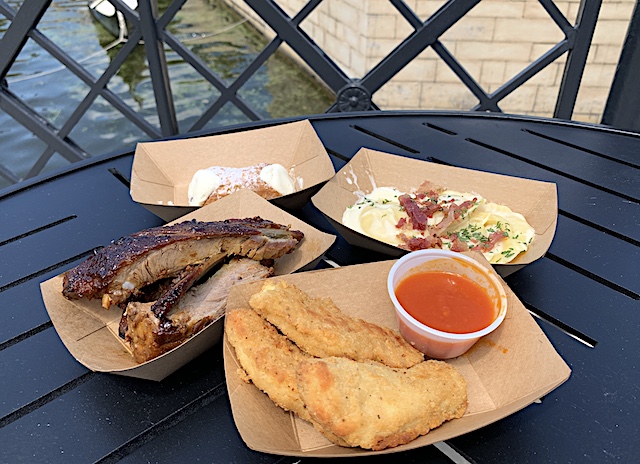 We got five of the ravioli [$7.25], three of the chicken pieces [$6], and three very meaty ribs [$8], making this pavilion — hand on heart — the best value we’ve seen from a Disney food festival in ages.

The chicken was pretty much your basic chicken breast tenders, though with a light and flavorful batter and a nice side of Mariana. The ravioli were actually enough to share, with a cream-enhanced Carbonara dressing the Parmesan- and Pecorino-filled ravioli. The ribs, though, stole the show with fall-off-the-bone tender meat enhanced by a glaze that added extra umami without any distracting sweetness.

The single cannoli [$4.25] was nice, but seemed skimpy next to the other three selections and just didn’t measure up to the bright flavors of the blueberry tart we’d just enjoyed.

Stuffed from the portions in Italy on a hot August day, we sweated our way around the other side of the World Showcase to the Refreshment Port next to the Canada pavilion. Our target here was the Duck Confit Poutine [$8.49]. 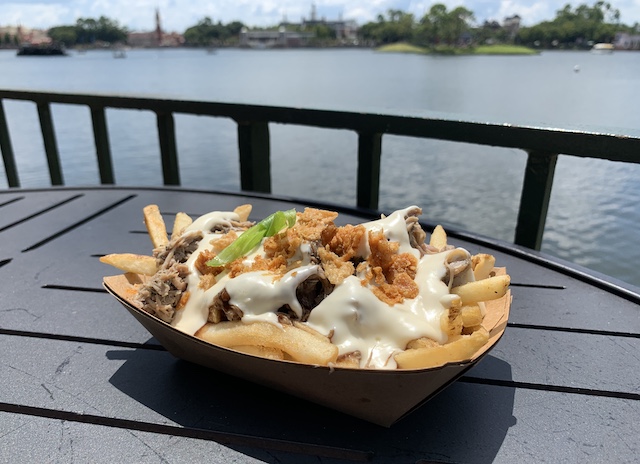 Served atop fries with a fig Demi sauce and with a Brie fondue in lieu of the traditional cheese curds, this poutine is either a complete meal for one or something to share among several friends. Once you get over the guilt of Epcot’s Mallards staring you down, the duck here was quite tasty, and I’ll never say no to melted Brie, though I miss the texture that curds bring to a traditional poutine, which also is available here for $6.99.

That's all we could try today, but with a record 87 days to enjoy this year's festival, there's plenty of time for Disney and food fans to try more. The 24th Epcot International Food and Wine Festival runs daily through November 23 this year.

My favorite theme park event ever year (with Universal Cool Japan my second favorite) and was hoping to stop in for my first pilgrimage of the season over next couple of days- though looks like hurricane duties will keep me and my appetite elsewhere nearby...surreal to have a holiday weekend crowd with major openings and events while a Category 4 storm aims at us. Tropical native and very used to this, though it doesn't get weirder than when we are all smiling and excited for big things we eagerly anticipate and also have to simultaneously prepare for the worse, with a national holiday weekend complicating matters further...

I should have remembered this, but in organizing my receipts for today, I noticed that the Italy marketplace is run by Patina Group - which runs the pavilion's restaurants - not Disney. That might explain some things....

That's pretty surprising to see a 3rd party vendor operating one of the F&W Festival booths. Was Patina Group's operation of the Italy marketplace clearly noted either in the guide/passport or on the kiosk menu?

This is a bit of a concerning development IMHO, because if Disney decides that this arrangement is successful, it could lead to more and more booths being created and operated by 3rd parties, and a slow deterioration of the unified vision found across the entire festival. If more and more booths are turned over to outsiders that are more interested in their own individual success, it will turn the F&W Festival into what essentially would become a gathering of food trucks. If I wanted that, I would walk outside of my office and eat among the dozens of various food truck options that litter the city streets. I go to the EPCOT F&W Festival because it offers a differing yet complimentary cornucopia of dishes.

I sure hope this is a one-off, and only opened up to Patina since they have such strong ties with Disney. The EPCOT F&W Festival was never supposed to be a truckeroo. This is by far the best seasonal event Disney offers, and I'd hate to see it be undermined by outside commercial interests.

That duck confit poutine definitely looks like the best of the bunch. Also, for those who take in the F&W Festival using DDP snack credits, that has to be one of the best values with a menu price over $8.

The only indication of Patina's involvement was on the CC receipt, which noted the payment went to Patina Group. It wasn't a Disney-style receipt. But that was the best of the marketplaces I've been to recently on either coast, by far. With Patina running the new Space 220 restaurant, I wonder if this is part of some new deal between Patina and Disney.

Totally agree with Russell on the poutine. That's definitely in the DDP snack credit Hall of Fame.