The 12-minute show features a greatest-hits medley of original songs written for the park's attractions, starting with the Sherman Brothers' "One Little Spark" from Journey Into Imagination, interspersed with audio clips of Walt Disney introducing his Experimental Prototype Community of Tomorrow concept to television viewers in the mid 1960s.

The show's first act leans heavily on pyrotechnics, as the soundtrack calls on several Epcot themes, such as the Universe of Energy. But it's the theme from the original Soarin' that introduces the first use of the much-anticipated special effects kites, which fly across the lagoon in a spectrum of color. 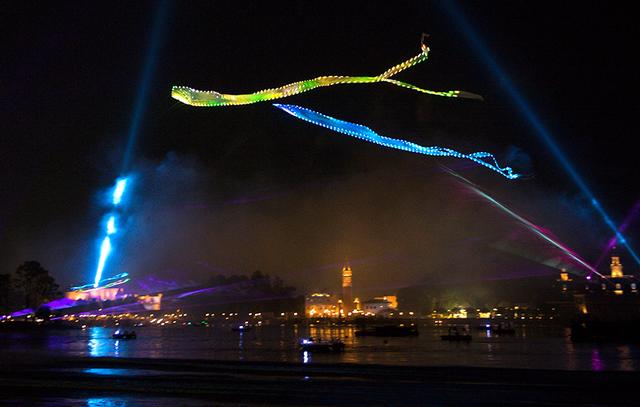 From then, the show becomes a pryo-driven audio mashup, eliciting cheers from the crowd as people recognize their favorite tunes. There's "Makin' Memories" from the old Imaginations preshow, "Veggie, Veggie, Fruit, Fruit" from the long-gone Food Rocks! animatronic show in The Land pavilion, and "Fun to be Free" from the World of Motion ride.

With "Golden Dream" from The American Adventure, the kites return, this time spewing pyro of their own. I'd guessed that Golden Dream might provide the show's finale, but Disney instead chose to inject a bit of IP into the production, using "A Whole New World" from Aladdin for that role.

Aladdin doesn't have much of a presence in Epcot, but the idea of a "whole new world" certainly resonates for a park that's seeing its front half be rebuilt. So with that, this fond look backward at Epcot's history glances forward toward its emerging future.

It's an appropriate way to end a celebration of this park, for as Walt Disney says in the final audio clip in the show, "Epcot is and always will be in a state of becoming. It will never cease to be a living blueprint of the future." (The replay of the premiere show begins at the 10:40 mark.)

Epcot Forever is not the next installation of IllumiNations, nor is it meant to be. This is a moment of fan service, something to tie over Epcot's most loyal devotees as Disney fixes up the front of the park to welcome what it hopes will be an influx of guests to see the new Ratatouille ride and Epcot Forever's replacement, HarmoniUS, when they open next year.

As that welcome moment of fan service, Epcot Forever delivers.

I just finished watching this (near the Mexico pavilion) and I gotta say...I loved it! Did they reinvent the wheel? Nope. I liked how the kites had the cool sparklers on them. It was pure nostalgia and good old fireworks and the other stuff (lasers and kites) was a tasteful accompaniment.

I just watched the live stream. It looked great on video. If I could have made one addition, I’d have liked to have some actual audio cues from the pavilions in addition to the new audio. Stuff like, “We welcome you to The Living Seas. We welcome you - to SeaBase Alpha.” ”Behold, the majesty of the Sistine ceiling.“ “I’ll use those to paint with!”
I don’t think anyone was really expecting much more than a classic fireworks show with kites and nostalgia music. Just a stop gap until the really big show can be installed.
On that account, I’d say they did a fine job.

I feel so very, very old at realizing I can vividly remember when every one of these songs was brand new.

I watched Disney's live stream as well and I dare say this 80s nostalgic Epcot girl got a little emotional herself. I've sang those songs over the years from the shower to the car but like Rob said, I would have loved to hear attraction quotes mixed in. Regardless, it's not only a reminder of how old I've become, but how old the park is as well. I personally can't stop the progression of Epcot nor should I but it was a bitter sweet kiss on the cheek to those of us who's lives were changed forever by stories and characters we'll never see again.

I want to give Disney a hug for this tribute but I would whisper in their ear...."Remember why you did this. We're all still here."

I find it kind of funny that Disney is pushing the kites as some sort of unique and new element for a nighttime show. Hard Rock Park used kites in its nighttime show (Bohemian Rhapsody) back in 2007, and yes, those kites had pyrotechnics too.

The one big problem I see with this show is that it's going to drive a lot of nostalgia and guests wanting to see this just to relive the past. When it is ultimately replaced by HarmoniUS, those guests are going to be left wondering why all those good feelings from the past need to be replaced by IP. HarmoniUS is going to have to knock it out of the park to overcome the preferences of the typical EPCOT guest (the park tends to attract an older audience).

The extremely negative reaction to the Aladdin finale reminds me a bit of the Star Wars OT fans' reaction to The Last Jedi and Galaxy's Edge. Saw someone joke on twitter they should have used "Let it Go" instead!

Epcot has been badly broken conceptually for a while, and though I am very nervous (like many) that the promised changes will not come to fruition, at least there's something on the table to reinvent the park, particularly the completely shattered spine of Future World. Epcot has a wonderful history and it deserves to be commemorated and celebrated, as most of this show does, but a big part of the spirit of the park is to create new experiences and constantly innovate for future generations.

Looking forward to seeing it in person tomorrow night.

I watched the live stream last night, and as an interim night time show, it just about makes the grade. The tourists will be happy to see the fireworks and the novelty of the kites, but for the vast majority the nostalgia parts will be nothing more than a narrative that accompanies the show. I certainly won’t be making a special trip and/or night time visit to Epcot just to see that show.

If we can believe what’s been rumoured about HarmonioUS it sounds amazing, and for that I’ll definitely make a special trip to opening night that’s for sure.

Looks great, reminds me a little of the original illuminations when I worked at the park back in 1993/94. What I don't get though (maybe I've missed something) why have they set up an interim show, why didn't they just keep the 'reflections of earth' running until HarmonioUS is ready?

^The reason for the interim show is because Disney reportedly is seeking to reuse a lot of the existing infrastructure used for Illuminations and it would have put Epcot without a night show for almost a year.