Universal reveals the lands for its next theme park

October 11, 2019, 8:32 PM · Universal today revealed the line-up of themed lands for its upcoming Universal Studios Beijing, which opens in 2021.

Along with the line-up announcement, Universal released new concept art for the park, in which we can see the seven lands that will make up what will be Universal's largest single theme park when it debuts. 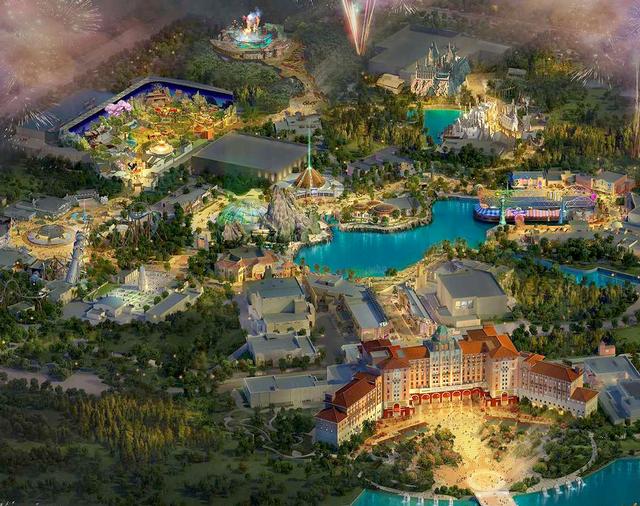 The entrance will be through the previously announced Universal Studios Grand Hotel, behind which visitors will find Hollywood Boulevard, the park's entry plaza.

This land will be home to a Lights, Camera, Action! attraction, but this time joining Steven Spielberg as the star will be Chinese director Zhang Yimou, who is probably best known to Western audiences as the director of the opening and closing ceremonies at the 2008 Beijing Olympics as well as the director of the 2016 Matt Damon film, The Great Wall.

Across the central lagoon at the end of Hollywood Boulevard stand two more lands. To the right is Minion Land, the Despicable Me themed land that looks to include a Super Silly Fun Land as well as a likely installation of Minion Mayhem.

To the left stands Jurassic World Isla Nublar, highlighted by the iconic theme building from the new films. There's a large glass dome to the lower left of that building, as well as a massive show building behind it. A Jurassic World dark ride, perhaps?

Following along clockwise beyond Jurassic World, there's a concert area, identical to the one at Universal Studios Florida, but with the tower from Universal Studios Hollywood in front of it. Continuing to the left, we reach Transformers: Metrobase, which includes a Transformers-themed clone of the Incredible Hulk coaster from Islands of Adventure. There also appears to be a spinner ride here, as well as an installation of Transformers: The Ride.

Above the Transformers land, we find Kung Fu Panda Land of Awesomeness, which will include multiple carnival attractions and iconic locations from the films, including the Jade Palace, the Panda Village, and the Peach Tree of Heavenly Wisdom.

Continuing around the park, up the path stands Universal Studios Beijing's WaterWorld land, which will include another production of Universal's award-winning stunt show. Universal promises additional entertainment and dining around this show theater, making it a complete land within the park.

And that brings us to the park's seventh and final land, The Wizarding World of Harry Potter - Hogsmeade, which should be well familiar to U.S. themed park fans at this point.

You might notice that there was no mention of Fast & Furious Supercharged, which Universal previously announced for the park. It's possible that could occupy the space to the left on Hollywood Boulevard in the concept art, but it's at least curious that Universal did not mention it in its big reveal today.

There's an introduction video to the park that includes more concept views on Universal Beijing's website. Just click the "Watch the video" button next to Harry Potter on the first slide to watch it. (When I get an embeddable version, I will include that.)

Looks very impressive, see how much actually is built but looks like fun. Hopefully a few things to set them apart rather than just copy US rides.

Entrance through the park's signature hotel... then a reveal of the volcano across the lagoon... It's suspiciously reminiscent of Tokyo DisneySea.

Looks awesome! Hopefully will get to go one day.