October 21, 2019, 11:13 AM · SeaWorld San Diego announced this morning that it will convert its Aquatica water park in Chula Vista into the west coast's first Sesame Place theme park.

The Aquatica water rides will stay, and SeaWorld will expand the park with new attractions, providing a Sesame Street overlay to the entire property. Sesame Place San Diego will open in spring 2021.

The original Sesame Place opened in Langhorne, Pennsylvania - just north of Philadelphia - in 1980. That park also offers a mix of water and dry attractions, adding the Oscar's Wacky Taxi wooden coaster from The Gravity Group this year. Like many of the SeaWorld/Busch Gardens parks, SeaWorld San Diego includes a Sesame Street-themed land in the Sesame Street Bay of Play children's play area.

But water parks traditionally have not had the IP presence that theme parks have offered, which should help make the soon-to-be-former Aquatica a more attractive location for families in the San Diego area. SeaWorld's big competition for that market in the community comes from Legoland, which offers a water park as part of the Legoland California Resort. 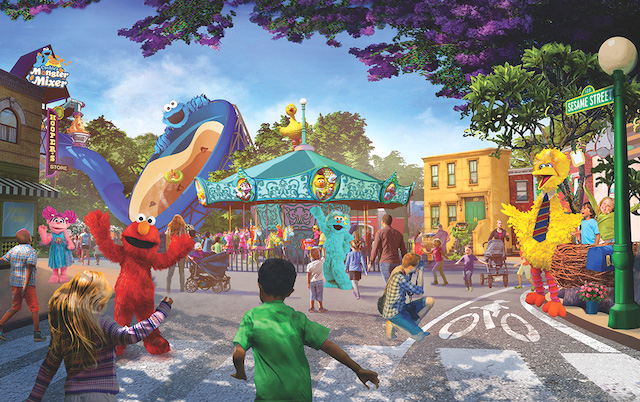 The San Diego Aquatica park was built as White Water Canyon then later known as Knott's Soak City. SeaWorld bought the park in 2012 and rebranded it the next year.

"We share Sesame Workshop's goal of educating and entertaining generations of children, and the opening of a second park, the only one of its kind on the West Coast, furthers our company mission to provide guests with extraordinary experiences," Marc Swanson, Interim Chief Executive Officer, SeaWorld Entertainment, said. "We are thrilled to be able to grow the presence of Sesame Place theme parks in the United States, and San Diego is the perfect complement to our Philadelphia location."

The renovated and rebranded park will feature "family rides, water slides, live character shows, parades and interactive experiences," according to SeaWorld and will reopen as a Certified Autism Center, like the original Sesame Place. That means park staff will undergo autism sensitivity and awareness training and park locations will include designated quiet spaces with adjustable lighting and comfortable seating.

Aquatica San Diego will remain open next year during the conversation to Sesame Place. It will open for its final season on Memorial Day weekend in 2020.

This is great news for San Diego, but I do have a couple of observations. It is interesting that our county will now have two theme parks that are highly focused on a younger than normal demographic. LEGOLAND has a big lead in this area along with its water park, aquarium and two resort hotels. The San Diego Zoo (and safari park) are also extremly popular with the Stroller Mommy demographic.
I'm most curious to know if the present Sesame Street area at SeaWorld San Diego will stay or get moved to the new Sesame Place park. This would open up quite a bit of space at SeaWorld to add even more thrill rides to continue to build that parks transition into a thrill ride park with some animal attractions.
Either way - this is exciting news for the tourism industry in San Diego and a win for the Aquatica park that will now get to go year round.

I get the general idea (and I think it's a smart one), but I wonder if they are planning on replacing some of the slides. Many of these rides have serious height requirements (42 inches or 48 inches) and I think its it's too much for alot of their target demographic. Disney Water Parks have several attractions with 38 inch height requirements and I think that is what Sea World should be aiming for. My son is 5 years old and is 40 inches tall and he can only ride 2 slides at Aquatica Orlando outside of the toddler play area.

This is great news. Sesame Street is legendary and I think San Diego is the perfect place for this as mentioned in the previous comment about the younger crowd. I was actually hoping to visit Philly and taking my 2 year old. Then I discovered one closer to my neck of the desert in Monterrey, Mexico (Trust me they do have one with a waterpark included in the park as well) I'll just wait the 2 years to hit up the new San Diego park. I also am wondering what they are going to do with the Sesame Street presence at Sea World. Questions Questions Questions.... at the end of the day, more theme park is always a good thing.

Despite being included with my SeaWorld pass, I've never made it down to Aquatica San Diego. However, I'll probably make it down to check this out when it opens in 2021, mainly out of curiosity to see what they do with the place. While I don't think Sesame Place will see a ton of drawing power beyond the San Diego region, it should be immensely popular with families in the area as well as those visiting the area for SeaWorld or the San Diego Zoo.

Christmas kicks off on Thanksgiving at Universal Hollywood

What should Disneyland do with Star Wars Launch Bay?