Time to sample the tastes of Universal's CityWalk

These tastings provide a welcome opportunity to graze across a menu without having to either a) bring along a ton of friends who are down with sharing, or b) gorge yourself on way more food than one ever should eat in a sitting. I've eaten at both restaurants before... not to mention having sampled their Orlando siblings at their media debut five years ago. So I came with a few favorites in mind and were actually happy to see that they were not among the samples offered tonight. Time for something new!

I started at Vivo, where I am partial to Squid Ink Seafood pasta ($21), with black linguine, calamari, clams, mussels, and shrimp. Tonight's pasta selections were tastes of the Pesto Trofie ($19 on the regular menu), with basil pesto roasted sweet pepper, oven-dried tomatoes and crispy Parmesan, and Sausage Ragu ($16), with penne and Italian sausage in marinara. 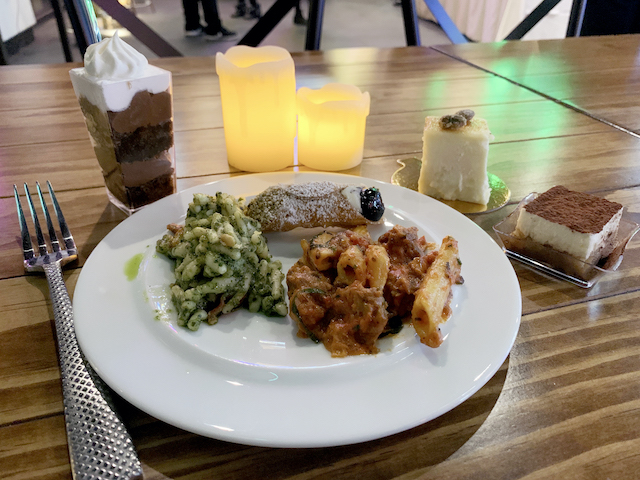 Both pasta dishes satisfied, but the Pesto Trofie might tempt me away from my beloved Squid Ink Seafood. I adore good pesto and this was a great one, well balanced by the roasted pepper. As for the dessert, I'd probably go with the cheesecake here, as I'm pretty much over Tiramisu at this point. With toasted pistachio on one side and an Amarena cherry on the other (and sheep's milk ricotta in the middle), there was just too much happening in the mini cannoli for my taste. The chocolate had the opposite issue (it's all chocolate and just chocolate), but that's a feature and not a bug for chocolate lovers, so I'll leave it at that.

Over at Antojitos, my pick is the generous helping of Carnitas Nachos ($7) on the bar's happy hour menu. It's plenty to share with drinks or as a full dinner for one on its own. But tonight, I'm all about the Mole. 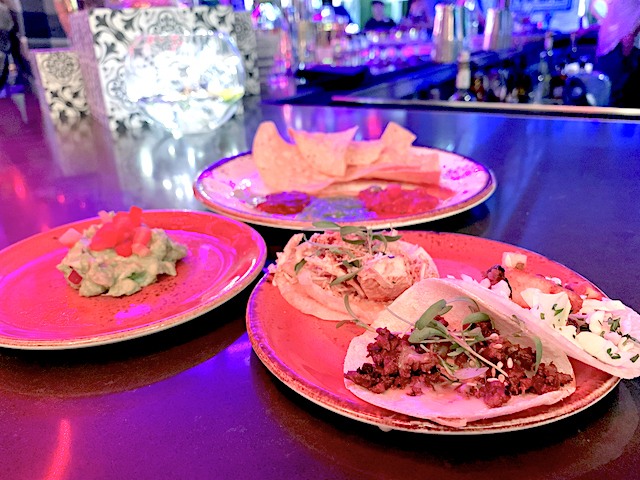 Tonight's samples included that Mole ($14.95 as an enchiladas entree with chicken), Vegan Chorizo ($13.95 as a tacos entree), and a Jicama-crusted Shrimp Taco (which I did not notice was not on the regular menu until I returned home). There also was plenty of chips, salsa, and Antojitos' guacamole to enjoy.

As I said, the Mole is my choice here, with a rich sauce atop the tasty chicken (which is a feat in itself, as too many restaurants' chicken is either tasteless or an oversalted mess). Try the shrimp tacos if you can get them, too, as the mango habanero salsa delivered a nice kick to the crunchy, sweet shrimp.

Mexican restaurants can be challenging for vegans, I know, but that tasteless Impossible faux-rizo wouldn't sell me on skipping another, more flavorful option. Heck, just make a meal of the guac ($14.95 for the trio - with traditional, pomengranate and pepita varieties - or $9.95 for the traditional alone). It's worth that.

Next year, NBC Sports Grill and Brew with take over the soon-to-be-former Tony Roma's space across the plaza from Antojitos as the Orlando-ization of Hollywood's CityWalk continues. And I have absolutely zero problems with that. Bring on Bigfire and Toothsome, I say!

Is an Atlanta speedway showing us the future of theme parks?