November 22, 2019, 1:20 PM · Disneyland has released a concept image for the new entrance to Tomorrowland that the park has been working on for the past few months.

The new entrance replaces the "French fry" rock formation that Disney installed as part of the late 1990s Tomorrowland renovation - a reimagining of the land that Disney now has pretty much entirely abandoned.

The one change that has survived, however, is the placement of the Astro Orbitor at the land's entrance, which remains in the new concept art... as we expected since Disney just completed a rebuild of the spinner ride, preserving its 1990s-design look. 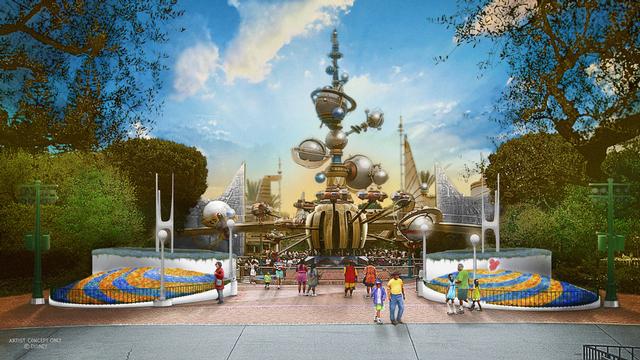 Colorful planters adorned with white spires that evoke the old-school Googie design of Tomorrowland will flank the entrance to the land when work is completed next year.

The new entrance also brings the "curb-less" design to the outside eastern side of Main Street around the Hub that Disneyland installed on the outside western side last year. Curbs remain on the interior of the Hub. The new Tomorrowland design also appears to expand the walkway space into and out of the land, easing the pinch point that the old French fry design had created.

Aesthetically? The image looks like a hodgepodge of design ideas to me, so I guess I will wait to see how it all comes together in person before saying anything more. But I curious to read others' reactions. The comments await.

A before picture would be helpful for those of us unfamiliar with what the French fry entrance looked like, but without the comparison I agree with your take on it. Doesn’t do much for me in the picture

This one image doesn't really reveal much, but it doesn't look like it completely eliminates the pinch point into Tomorrowland. It replaces the rocks with less obtrusive planters that still jut into the entryway. The design elements shown here are pretty indiscriminate, kind of like the new Tomorrowland sign at MK.

To me the Astro Orbitor ruins the entrance. The style doesn't match or flow into the land and it completely destroys all the sight lines.

From a Project Stardust point of view, this new entryway is undoubtedly an upgrade and welcome addition to the park. However, it feels like a bandage on what has become a thematically broken land. Even though MK's Tomorrowland has largely abandoned the incredible storytelling continuity that once held the land together, it still packs a strong punch in both aesthetic and attraction quality (especially with TRON taking up residence). DLR's Tomorrowland, by comparison, is an absolute eyesore and a true blemish on what is otherwise a near-perfect theme park.

Here is the Google Street View of the old entrance.

Thanks for the link, it’s definitely an improvement over that

I do find it a little strange that they are leaving the Astro Orbitor where it's at, along it's Verne-esque look and copper/bronze metallic-based color palate. These new planters hearken back to the classic white and silver based look of OG Tomorrowland. I know they just did a refurb on the Astro Orbiter, but it's going to stick out like a sore thumb now unless they give it a new paint job and color scheme, especially since it looks like they're restoring some of the original facades on the Buzz and Star Tours buildings that are now more visible with the rocks out of the way.

The one element that catches my eye is the colors of the flowers.
Orange and Blue were the official colors of the 1964-65 World's Fair in New York. Which is interesting because the Disney Movie "Tomorrowland" begins at that fair and that's the fair that Disney developed it's a Small World, GE's Progressland - The Carousel of Progress, Great Moments with Mr. Lincoln and the Ford Motor Company's Magic Skyway.
The Orbitron's Steam Punk aesthetic obviously clashes with the ideas of futurism found at the 1964 World's Fair. The curious thing is we are all hoping for a refurbishment of Tomorrowland. I wonder if this is a small clue that they may be getting ready to return the land from a Jules Vern look at the future to something more along the lines of what the future was to look like back in the 50’s when Disneyland first opened. I think we are seeing hints of that also happening at Tomorrowland at The Magic Kingdom.
This will be fun to track over the next few years.

Just read MiceChat’s article on this... if you look very closely you can see people on the Rocket Rods right behind Astro orbiter, its a very small drawn detail. I wonder if Disney tried to hide this detail so most people don’t see it. Do you guys think they’ll actually bring back Rocket Rods/People Mover?

I think it's more likely that they recycled the old concept art for the 1990s Tomorrowland entrance (to have the Astro Orbitor in its current place), then skinned the new entrance on top of that.

I mean, does anyone really think Disney's gonna get rid of Buzz Lightyear?

Wow yet another upgrade to Tomorrowland that doesnt actually fix the problem: move the AO and remove the people mover tracks. Unacceptable that they cant do this but they can waste a billion on the discount Tatooine land.

I do like how they get rid of the "pincher" rocks. Always tricky going off early artwork so we'll see how it looks in real life but that's a step in teh right direction.

There's no way that is how its going to look when everything is finished, Imagineering people would never buy off on that kind of clash. Perhaps that little front area will be the first thing that's done.

Look at how WDW's Tomorrowland has [extremely slowly] transitioned to over the past decade that blends some new styling with the basic 70's retro look, and the 1994 retheme is going away. From the look of that picture it looks like DLR is going to be doing the same. But there's no way they're going to have some structures be bright white and others dark brown in the same area (at least not permanently).

My understanding is that this is only interim measure that is part of the Stardust project and not the beginning of the Tomorrowland overhaul. Lots of people are expecting the timeline to go as follows- Marvel’s Avengers Campus at DCA (next year), Mickey’s Toontown expansion (2022), Fantasyland upgrades and expansions and then a new Tomorrowland. They probably won’t move the Astro Obiter until then but they already green-lit the removal of the old PM tracks.

Maybe first fix the rides like the old Rocket Rod, before spending money to polish a t*rd.