The Grinch and Harry Potter welcome Christmas at Universal

November 29, 2019, 11:01 PM · Universal Studios Hollywood waits until Thanksgiving to begin its Christmas holiday celebrations, so I headed over today to join what felt like the entirety of the Los Angeles population to check out this year's event.

Yes, Universal is packing them in on a chilly day in LA for its holiday celebrations, including Grinchmas... 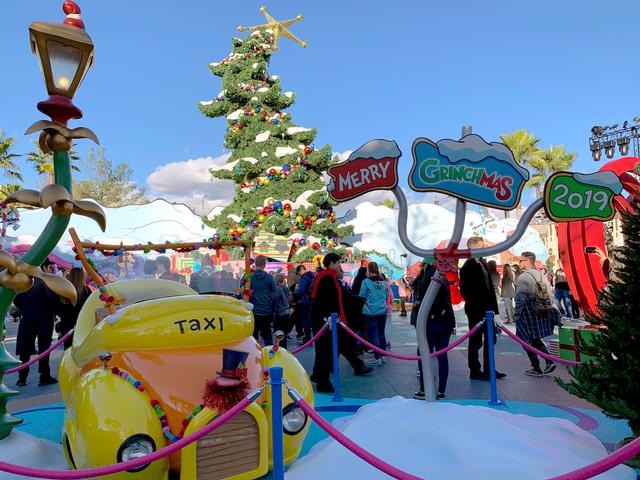 ... and Christmas in The Wizarding World of Harry Potter. 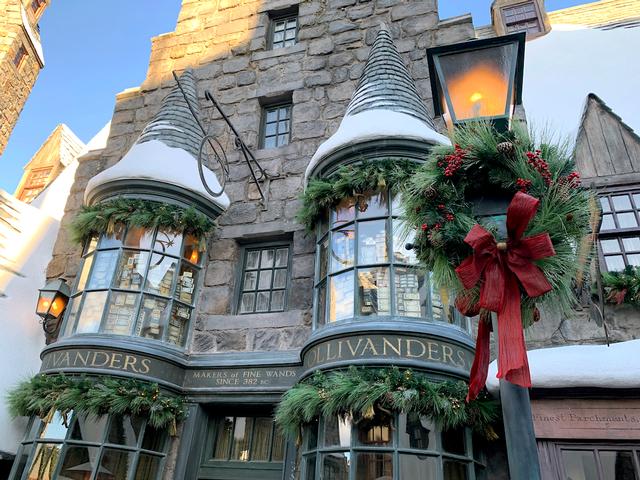 I'll get to the shows in a bit, but first, some refreshment. The Three Broomsticks' Holiday Dinner ($15.99) this year features roast turkey, bacon-wrapped sausage, stuffing, gravy, roasted Brussels sprouts, and sautéed carrots. I had it with the a 12oz. Hot Butterbeer (which is now $7.99). 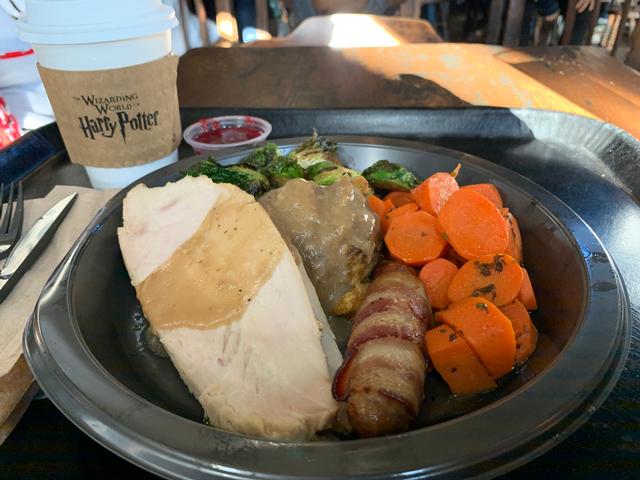 It's an impressive amount of well-prepared fresh vegetables for a quick service theme park meal, but The Three Broomsticks is a multiple winner of our Theme Park Insider Award for best counter service restaurant, so I always look forward to the arrival of its annual holiday meal. But I gotta admit that the ever-escalating price of Butterbeer is making me reconsider my previously unquestioned devotion to The Wizarding World's signature drink.

Elsewhere on the Christmas dinner beat, you can find several holiday-themed desserts around the park, and if you're in the mood for another IP-driven meal, Universal is serving cans of Who Hash ($10.29) over at Hollywood and Dine. (Full from the Holiday Dinner, I didn't try that one on this trip.)

Back in The Wizarding World, beyond the holiday decor and ornaments for sale in the gift shops, the big holiday draw is the return of The Magic of Christmas at Hogwarts Castle, which plays every half hour from 5:30pm until park close.

I love all the versions of the Hogwarts Castle projection lighting show. While I consider the Dark Arts version to be the most visually impressive (especially with those drones), the Christmas version is the most emotional, for me. That finale gets me every time, and I love it.

Pro tip: Try to time finishing that Holiday Dinner in The Three Broomsticks about 20 minutes or so before the first, 5:30pm showing so that you can get a good spot in front of the castle before the queuing herds of fans stampede through the land for the 6pm and subsequent performances.

Then head over to the Universal Plaza for Grinchmas' Wholiday Tree Lighting.

This six-minute production isn't nearly as grand as Universal Orlando's half-hour Grinchmas Wholiday production, but it's a delightful show that's well worth your time. Like the Hogwarts spectacle, this show also plays every 30 minutes from 5:30pm on each evening, now that Grinchmas is an everyday part of Universal Studios Hollywood's holiday celebrations. The festivities continue through December 29.

Disney offers a fresh peek inside Rise of the Resistance