December 5, 2019, 2:25 PM · The Tokyo Disney Resort today revealed more detail about its big Tokyo Disneyland expansion this spring, including the name of live musical show that will play in its new 1500-seat theater.

Mickey's Magical Music World will perform five to nine times daily in the new Fantasyland Forest Theatre, which opens with the rest of the expansion on April 15. The 25-minute show will feature a variety of Disney characters performing favorite songs.

The story is that Mickey, Minnie, Donald and Goofy find a giant music box in the forest. (Remember the name of the theater?) Because of course they open it, we see several Disney characters emerge, accompanied by their themes. But this line-up of Snow White, Pinocchio, and Sheriff Woody is not complete. There's a missing song in this box, so Mickey and Friends set out on a quest to find it. That leads to more Disney characters — and more music — on the way to the finale.

The headliner attraction in the expansion is the previously announced Enchanted Tale of Beauty and the Beast, a trackless dark ride through the Beast's Castle that Tokyo Disney announced toady will be eight minutes long. The ride also will offer Fastpass and single rider, as well as TDL's "Happy 15" early entry for hotel guests. (That's 15 minutes. Tokyo Disney is fierce with the early morning crowds.) 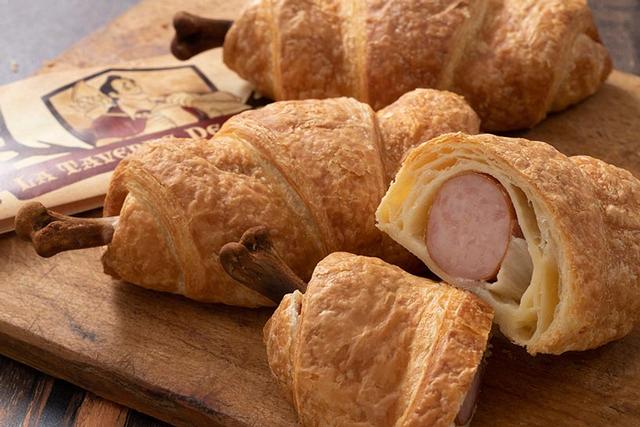 We've also got the menu for the new La Taverne de Gaston restaurant, which will feature a "Big Bite" sausage in a croissant (above), a sweet-and-savory French toast sandwich with cheese, a handheld Hunter's pie filled with beef stew, and a "Berry Cheers" foam-topped soft drink. Next door to Gaston's will be LeFou's (of course), which will serve apple-caramel churros.

The three Village Shoppes in the Beauty and the Beast mini-land within Fantasyland will be La Belle Librairie, Little Town Traders, and Bonjour Gifts.

Other attractions opening April 15 will include The Happy Ride with Baymax, a Mater's/Swirling Saucers ride in Tomorrowland, and Minnie's Style Studio, a meet and greet in Toontown.

I understand those are "Bone Sausages" wrapped in a croissant. Google it y'all...it's for real. It's like a sausage with a bone stuck in as a handle. They are popular in Asia. Just imagine the lawsuites that would be on the hands of any American resturant that served something like this?!? "Well, your honor, I bite into the dang thing and broke my teeth on a bone! I mean - who puts a bone in a sausage?" Amazing.