For those who came on the scene after the 1995 opening of Disneyland's Indiana Jones and the Temple of the Forbidden Eye (aka Indiana Jones Adventure), Disneyland once handed out decoder cards that fans could use to translate "Mara-glyphics" symbols written through the queue. 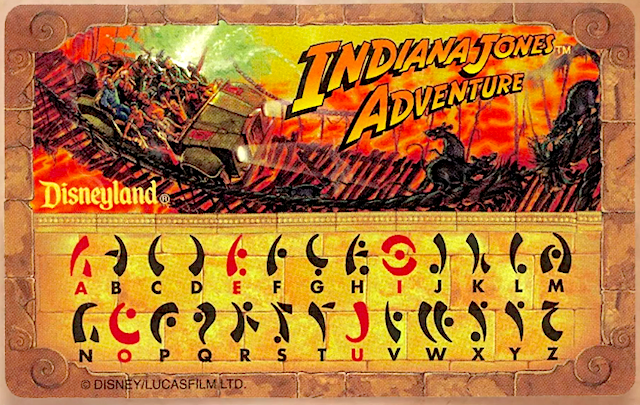 At some point, Disney ran out of the cards, which soon became collectibles. It's offered the cards again on a limited basis now and then, but for most fans these days, the symbols in the queue are nothing more than decoration, incomprehensible without either the explanation that they are a written language or a way to read it.

Now Disneyland is reviving this feature of one of its original interactive queues by building an Indiana Jones translation function to its Play Disney Parks app. It's part of a new game in the app, available now, called "Indiana Jones Adventure – The Gifts of Mara."

As guests explore this game within the app, they will be able to once again decode the ancient glyphs, along with some new symbols and codes that have been added throughout the queue, to piece together the legends of Mara. Each translated code will reveal a single portion of a map. Guests can complete the maps to receive digital achievements, and finish a set in order to piece together a special message from Mara herself.

The Play Disney Parks apps also is the app that you use to access the Star Wars Datapad that allows you to translate signs, play games, complete missions, hack droids, start spaceships and have your on-ride performance tracked inside Star Wars: Galaxy's Edge.

Throwing this open for debate... I'm not a big fan of parks encouraging fans to use their phones for entertainment while inside the park. Yes, official apps are great for logistical stuff such as finding your way around the park, checking wait times and schedules, and making and changing reservations. But I much prefer that parks play to their strengths by creating wait experiences that entertain you with engaging environments and performances rather than asking you pass the time by playing some game on your phone. After all, once you take out that phone, it's just too easy to click open Facebook, Instagram, or some other app that draws you out of the park experience.

But at least these games from Disney direct your attention to physical elements around you in the park, using the phone as a way to enhance and enliven those surroundings. The new Indiana Jones game also should help revive what had become a dormant interactive feature in one of the park's longest queues. So even if no park seems yet to have perfected a must-play, in-park mobile game, this latest attempt by Disney seems a decent step toward that goal.

I'm not opposed to this at all. As we all know from visiting theme parks & waiting in lines. The "smartphone" is in constant use. I'm guessing Disney figured if it's going to be out, might as well use it for something in the queue.

I too would much rather have any interactive or entertaining elements be organic to the actual attraction instead of relying on smartphones & devices.....but if we're being honest & realistic....guest are most likely going to be on their phones anyway. Whether its for photos, social media, logistical stuff, etc. The majority of guest have access to this, so theme parks utilizing an app to provide additional entertainment was bound to happen & will most likely increase.

All I know is that only the pure of heart may enter the chamber of destiny.

Just like the Arubesh translator, this is pretty useless if it's not going to use your phone's camera with visual character recognition in an AR environment. I'd much rather have a physical card than to hunt and peck on a touch screen keyboard to translate a foreign language, and I think Disney would probably be better off selling nice card-stock translation cards than this ultimately low-tech smart phone solution. We received an Arubesh translation card at DHS's Launch Bay back in 2017 when our son bought a nametag (his name is printed in Arubesh), and I found that card much more useful than the Datapad in translating characters in Disneyland's Galaxy's Edge when we were there in August over trying to do it via the Datapad.

I do like the "challenge" element introduced by translating all of the phrases in the queue within the app, but I think it would be much more effective and engaging if it was done via AR instead of the exhaustive, manual entry that is indicated here.

I missed these as the first time to Disneyland was 92 as a 10 year old and not again until 2008. My wife however went all the time as a kid and had told me about this as she was there on opening day. It's cool but I agree with Russell that an app isn't as cool.

The new parade at Disneyland has an opening date