January 3, 2020, 9:49 AM · Our third Theme Park Insider Award category for 2020 is Best Quick Service Restaurant, with the honor going to Universal Studios Florida's The Leaky Cauldron for the second time. 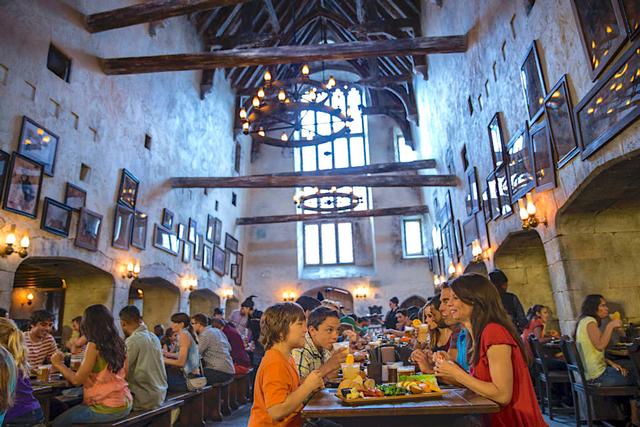 Located in The Wizarding World of Harry Potter - Diagon Alley, The Leaky Cauldron recreates the iconic London restaurant from the Harry Potter films and books, serving a menu of British pub fare throughout the day.

Breakfasts include traditional English and American breakfasts, pancakes, or oatmeal, while lunch and dinner offer fish & chips, bangers & mash, Guinness stew, and savory pies. Universal's Butterbeer is on the menu, as are several other themed non-alcoholic drinks, including Otter's Fizzy Orange Juice, Fishy Green Ale, and Pumpkin Juice. The Wizarding World's themed beers complete the drink menu, along with wines by the glass and Fire Whisky. It's all top-notch, providing a hearty and satisfying meal for hungry theme park visitors.

But it's the setting that helps make this restaurant such a beloved part of visiting Universal Studios Florida for so many fans. Working with some of the same set and production designers who created the Harry Potter films, Universal Orlando has delivered a faithful recreation of The Leaky Cauldron, allowing Harry Potter fans to continue their authentic Wizarding World adventure, even when it's time to eat.

The Theme Park Insider Awards continue tomorrow with the presentation of our award for Best Table Service Restaurant. And for tickets to Universal Orlando's theme parks, please visit the Universal Orlando tickets page from our travel partner.

About Theme Park Insider: Theme Park Insider is a consumer's guide to the world's best theme park resorts, reaching more than five million unique readers via its website annually and winning multiple honors for its reporting, including from the Online Journalism Association and the Webby Awards. Winners of the Theme Park Insider Awards are those locations that received the highest average reader rating, with a minimum number of votes, in their categories over the past year.

During my 4-day pass visits last year I went into the Leaky Cauldron twice. I really liked the atmosphere, and even though the lines were 20-30mins to get in, the service was quick and efficient and the seating very well organised.

However .... the food was very disappointing. I suppose being a Brit, I was expecting too much. The Toad-in-the-hole was awful, well the Yorkshire Pudding part anyway. It should be light and fluffy, but was heavy and stodgy. The saving grace were the very good pork sausages. Anyone who has had a toadie in an English pub knows what I'm looking for.

I almost had the stew the last time I visited, but at the last moment went for the banger sandwich. Another poor meal saved only by a decent sausage.

So what's the take on the food from all of you guys from across the pond? Am I being too harsh, and expecting too much from an American restaurant trying to serve up some traditional English fare ?

My British friends mostly agree with you Mako. It's fun, but the food isn't amazing. The Americans don't seem to know any different so most of them seem please, but friends with experience tend to be underwhelmed.

Just curious, do you have a good Orlando spot you like to go to for good British Pub food?

Not any more ….. we used to have a half-decent place on I-Drive (George and the Dragon) that we’d go to, to watch all the England games, cup finals etc, but about 2-3 years ago they closed, and I’ve never looked for anywhere since.

People rate the Irish bar in Disney Springs, but I don’t think it’s very good at all. The only English ‘fix’ I get these days are the Fish and Chips from the outside shop in the England world showcase area. They are as good as they get here in Florida.

Even the chocolate from the shop there isn't from the UK. It's made under license in Canada and tastes lousy. My friend and his wife come over a couple of times a year, and bring me a large tub of Celebrations and Heroes, so for a day or 2 ... LOL ... I'm OK .... :)

As far as counter service goes, this is definitely one of the best. I agree that the food is not quite as authentic as it probably should/could be, but I at least give UO an "A" for effort in sticking with a menu that's almost completely devoid of standard theme park fare. They could have easily slipped in a chicken strips platter here as an extension of the Fish and Chips, and no one would bat an eyelash, but they've resisted that temptation.

I think Sa'Tuli Canteen is a worthy honorable mention, but La Cantina de San Angel is criminally underrated as a counter service restaurant probably because it exists along the World Showcase and the dozens of excellent table service options.

I think Sea World Entertainment doesn't get the credit it deserves for providing excellent counter service meals at ALL of its parks. The "smokehouse" style restaurants at most of their parks are better than virtually any quick service spot at the Disney and Universal parks, and the international cuisine served at both Busch Gardens parks could give even comparable World Showcase table service restaurants a run for their money (and are typically lighter on your wallet too). I'm sure the SWE locations just don't get the reviews needed to qualify for this award, but they're certainly worth noting, especially at a more widely visited park like Sea World Orlando.

I'm with Russell on praise for SeaWorld's F&B offerings. I've not been to the Orlando park in several years, but I’ve never had a bad meal there. I especially enjoyed the carved turkey sandwiches that were available in the location towards the back of the park where the Beer School was located. Here in San Diego, I recently attended their version of a Wine and Food festival and found it to be much more my likings than what Disney is now serving. The reason? SeaWorld was still offering SMALL taste size samples allowing guests to enjoy lots of small bites rather than the nearly entree size servings Disney Food Festivals are leaning towards now.
In addition, SeaWorld's counter service meals (including BBQ) are always freshly prepared, with the kitchen almost always in guests view and there is a wide variety of salad and dessert options including massive bowls of fresh fruit.
All that said, I still think it’s difficult to find a better counter service meal in any theme park that beats the fried chicken at The Plaza Inn at Disneyland…mouthwatering.

My family and I ate at the Leaky Cauldron twice during December 2018, and I would agree with everyone's assessment. The holiday menu was decent, I thought, but nothing outstanding. What really made this restaurant was the organization of it all. Having someone up front directing you to the next available cashier. Then having trained waitstaff both bring your food out and take it away is a smart move. It's gets guests seated and out of the way quickly, and gets them out of the door quickly as well and doesn't jam up the aisles--as well as reduce the number of accidents. And then there's the decor and attention to detail. Sitting in one of the alcoves, they actually piped in sounds from above that made it seem like people were walking and working on a level above you. But that shouldn't have surprised me. That attention to detail is found throughout Diagon Alley.

And I agree with Russell. The food I've eaten at Busch Gardens Williamsburg rivals that of just about any other theme park.

SWO is hit and miss with the food. Waterway grill has changed things up a bit, but Seafire and Spice Mill have gone downhill. Voyager is always a good bet, especially when they have the pulled pork sampler. My favourite though is Expedition Cafe, mainly because I really enjoy their summer salad and salmon. The salmon is always hot and moist, and the fruit, nuts and blue cheese make the salad something worth getting. If they don't have the salmon, I'll have the brisket and that's always good too.

It's awesome having our pass member dining plan back !!

The 2 places I really like at BGT these days are the Zambia smokehouse and garden gate cafe. Serengeti is nice sitting outside, but they changed up the menu last year, and it went down in my pecking order for a place to eat.

I really like the Leaky Cauldron so I agree it should be near the top of the list. BUT hands down Satu'li Canteen is the best IMO. I will arrange my day just to ensure I go there and I think it’s far superior to a lot of table restaurants in Orlando resorts.

My vote would have gone to Satu'li had they not changed the salad base on the menu last year. It's fine now, but not as great as it used to be. Because of that, I will actually "cheat" here and go with Kohola Reef at Volcano Bay. It's the only "theme park" I can think of where I can get a Jerk Mahi sandwich at a quick service restaurant. Throw in the mobile ordering and it's a clear winner for me.

The clock is ticking for Disneyland's next ticket price increase