January 20, 2020, 3:19 PM · The CEO of the company that owns and operates Ferrari World Abu Dhabi today officially announced its long-awaited Mission Ferrari ride, along with several other new attractions at the Yas Island theme park.

Mission Ferrari, under construction now for several years, is a Dynamic Attractions roller coaster ride that incorporates multiple dark ride effects. The launch coaster's unique non-inverting loop has been visible over the Bell'Italia track ride for some time now, eliciting speculation from fans about what else the ride will contain in its "indoor" elements.

(I guess, technically, the whole ride is indoors, as Ferrari World is in an indoor park, but much of Mission Ferrari will take place within a show building at the heart of the park, so that's what I mean by "indoor" elements. You can see the ride's loop on our walking tour video, below.)

Mohamed Abdalla Al Zaabi, the CEO of Miral Asset Management, announced at a press briefing today that Mission Ferrari will open this year. The park also this year will add a new Family Zone, he said, as well as a zip line from the heart of the building out through the Flying Aces loop and a "walking experience" across Ferrari World's iconic red roof. 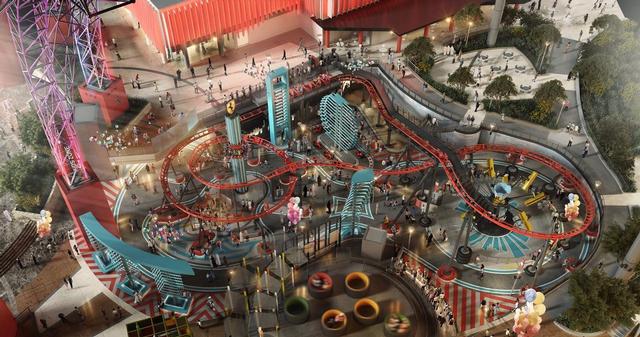 Al Zaabi also confirmed that Miral has signed another 10 year licensing deal with Ferrari for the park, which celebrates its 10th anniversary this year. The adjacent Yas Marina Circuit hosts the Abu Dhabi Grand Prix at the end of the Formula 1 season each year, making Yas Island a highly relevant location for a park celebrating the longest-competing Formula 1 team.

Yas Island also is home to Warner Bros. World Abu Dhabi, the world's largest indoor theme park that also this year placed in the top five of our highest-rated theme parks overall worldwide. Miral is developing a Warner Bros.-themed hotel adjacent to the park, with the hotel set to open next year. A SeaWorld theme park also is under development on Yas Island with a goal of a 2022 opening.