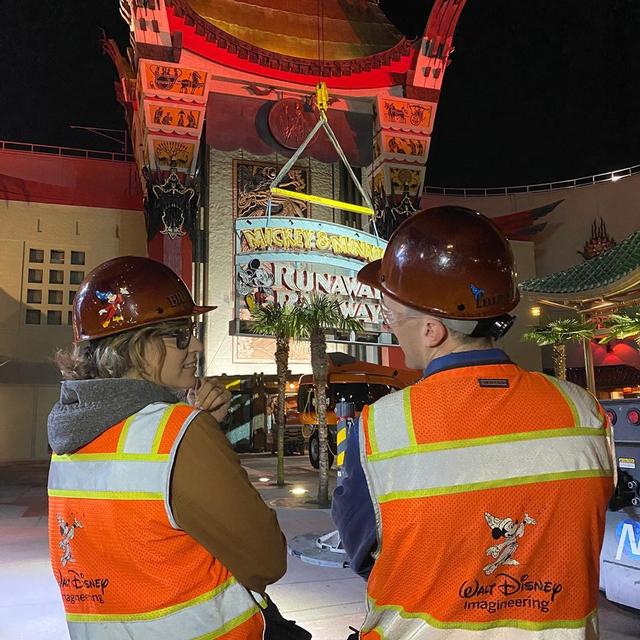 For more on Mickey and Minnie's Runaway Railway, please see our sneak peek article from December 2019.

Update: Following up on questions in the comments, it looks like the sign is neon. Here's a new promo clip of the sign's animation.

And here's more on how Disney made the sign:

Beautiful, glorious, warm glowing neon.
I love it.
LED is a great option, but it will never replace the romantic and nostalgic quality of artistically twisted electrified glass tubes of neon gas blazing in the night.

Talk about a transformation for HS! It's amazing that, just a few years ago, their lineup was embarrassing to look at due to all the closures that preceded this. I love the new park- so much energy and so much to do. I adored the HS of the past, but I feel that it's going in the right direction.

@Rob - Is the sign really neon, or is it a cleverly designed LED fixture? I do know that Disney has been slowly phasing out neon fixtures throughout WDW, so it wouldn't surprise me if they found a way to mimic the style with LEDs while gaining the energy efficiency that the more modern fixtures provide. Lasseter reportedly nixed using LED neon technology in Carsland because it didn't flicker or hum, which to him ruined the aesthetic. However, given that MMRR is based on the modern anime-style Mickey it wouldn't surprise me if this utilized the new energy-saving technology while still paying homage to the neon-look of classic Hollywood.

My hope is with all the neon that already exists on Hollywood blvd at DHS they will continue with that format. LED is changing how architectural lighting is done, but if authentic retro styling is desired, it's hard to imagine anything else looking the same.