March 5, 2020, 11:49 PM · Knott's Berry Farm invited local reporters out this evening for a tasting of some of the food coming to this year's Boysenberry Festival, which starts March 20.

The big news this year is, well, big. Like as in, someone from seems to have been watching old "Epic Meal Time" or "Man vs. Food" videos, because the park is rolling out a couple of outrageous new big-food selections for this year's festival. 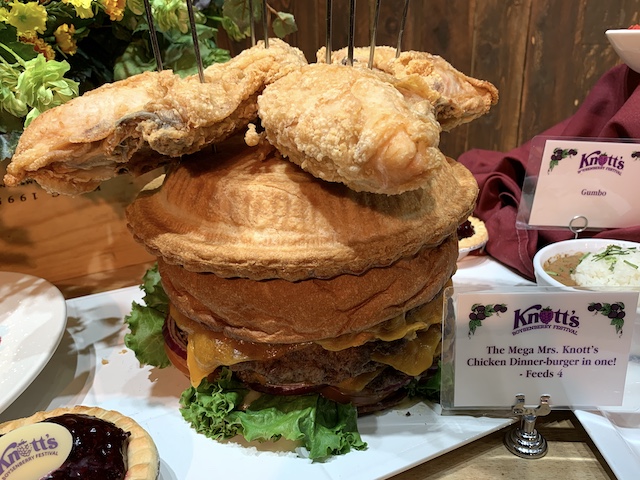 Not enough? Then try "The WOW Pasty," another four pounds of hamburger, caramelized onions, Cheddar cheese and bacon, all wrapped in Knott's pie dough and finished with a couple of fried eggs. This one will be served at the Ghost Town Grill. 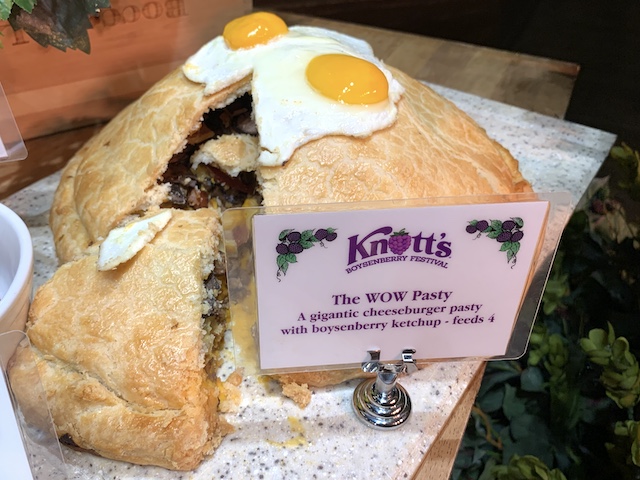 And for dessert, there's Funnel Cake topped with a stuffed doughnut, plus Boysenberry ice cream and Boysenberry whipped cream. 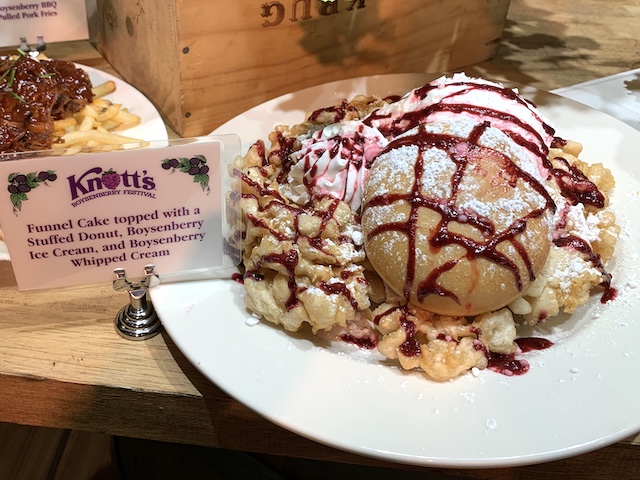 I know the Peanuts Celebration is over now, but I'm going to give all this a hearty, Charlie Brown-style "Good grief!" I don't think that Knott's will be staying open late enough during the Boysenberry Festival for people to get drunk enough to take on these. But I will credit Knott's for the laugh of the day with its placard suggesting that The Mega would feed four.

Go ahead and gawk and laugh at the crazy dishes. That's what they are there for - to get your attention. But don't let them distract you from the actual, enjoyable food that Knott's will serve at the festival alongside the social media fodder.

Knott's served 10 savory dishes and three desserts during tonight's event. I'll take them in order of my preference. First though, allow me a disclaimer. It's all but impossible to pass any reasonable judgment on what will be served at the festival based upon a tasting preview such as this. We're getting sample sizes, so I can't judge the size or consistency of what will be available for purchase. All I can do is look for a taste, a flavor that makes me say, "wow - I want to try more of that." So, to that...

What's not to like about beef tips and mashed potatoes? These were tender and tasty, but the big taste surprise of evening for me was the samosa. The Boysenberry chutney was a perfect accompaniment to this veggie-stuffed Indian turnover. The shrimp and grits also had me wanting more, with the hint of Boysenberry adding a welcome dimension to the Cajun spices coating the shrimp.

My second tier all tasted like winners, as well. This is hearty food, with just enough of a twist to make them interesting. I'd give any a try at the festival.The last three dishes just didn't do anything for me, though I'll take the blame for that, given my particular tastes. The Boysenberry seemed to fight with the mole on the chicken, and just distracted from the pork Bao. And while I liked the Boysenberry in the ceviche, there's just too much citrus and onion in a ceviche for me to like that dish. So, on to the desserts.Pull a Godfather here and "take the cannoli." Great taste and consistency in this sample. It was hard to get a sense of what the bread pudding would be like in the narrow plastic shot glass in which we got to sample it tonight. And a macaron is a macaron. While nut flavors do well, I always feel like fruit flavors get lost in a macaron. And such was the case here.

This year's tasting card offers eight selections from a choice of 26 dishes, including the 13 above. It costs $40, with a $2 discount for pass holders. Other selections, such as the big food above, will be available a la carte, at prices yet to be announced.

The Boysenberry Festival isn't just about food. Knott's will offer a variety of entertainment for the event, as well, including Snoopy's Boysenberry Jamboree on the Calico Mine Stage, Riverboat Revenge in the Bird Cage Theatre, and Knott's Totally Tubular 80's Dance Party.

Yeah, those first 2 seem to be those Man vs. Food style options that are only there to elicit media stories and attention from followers of Major League Eating. It would be interesting to see if Knott's would provide sales of those multi-person dishes at the end of the festival to see how many people were crazy enough to try them. Not only do those dishes represent huge, unhealthy portions, but the combination of various dishes just doesn't sound that appetizing unless you eat for a living.

I think Knott's has an advantage because the boysenberry lends itself to both sweet and savory dishes, but I also prefer the comfort style food of Knott's over Disney's foodie food, a lot of names and ingredients of which I never heard of. I guess people like to sample Disney's festival food because it allows them to try small samples of different things they might not try otherwise, but give me Knott's comfort food any day. I would be interested in trying 80% of Knott's festival food, and maybe only 20% of Disney's.

Wow that Chicken Dinner burger is a behemoth, and that burger egg pie doesn't look very appealing but maybe it tastes good

Tickets now on sale for the 'Midsummer Scream' Halloween event