September 1, 2020, 7:32 PM · It's full speed ahead for the west coast line of Mickey & Minnie's Runaway Railway. Construction is underway on Disney's second installation of the dark ride, which will go into Disneyland's Toontown. 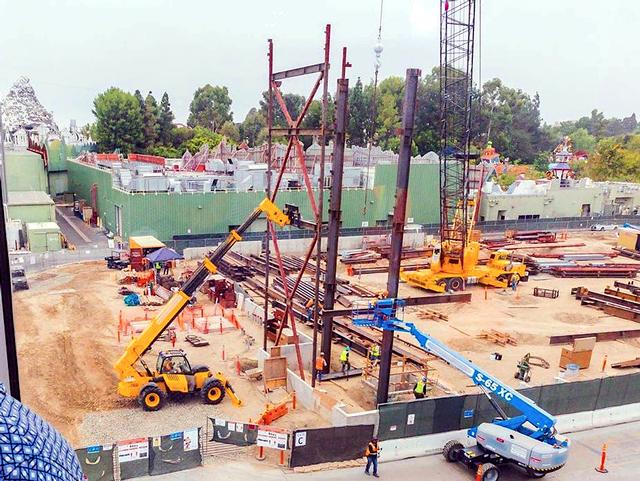 Mickey and Minnie's Runaway Railway originally was announced to open in 2022, but Potrock revealed today that the ride now is scheduled for a 2023 debut.

The first installation of the ride opened at Walt Disney World in Florida just before the pandemic shut down Disney's theme parks. That ride went into the old The Great Movie Ride space in the Chinese Theater at Disney's Hollywood Studios, but this installation will go into a new building, which replaces a warehouse and other back-of-house facilities next to Disneyland's Toontown.

It's another major expansion for guest space in the original Disneyland park, which saw its biggest expansion in decades last year with the debut of Star Wars: Galaxy's Edge.

This one's expected to be a clone of the Florida ride, which we reviewed when it opened in March. Here's an on-ride POV, minus the preshow spoilers, if you are looking for an at-home taste of the in-park experience.

The Disneyland Resort remains closed while theme parks awaiting reopening guidance from the state of California.

I'm happy to see they finally went vertical. I imagined that they were going to wait a bit longer until they started but this is a good start. I do wonder though when during 2023 they're looking to open it and if it's exactly a year behind the original opening date or not.

I’m glad to see this progressing.
If construction is continuing & the park is closed..is the reason for delayed opening relates directly to construction?

I suspect so. California had closed almost all construction projects for several weeks during the spring and early summer. But construction is allowed now, even if theme parks are not.

Great news that construction is continuing now. This ride can open in 2022. I am not an engineer of any sorts but judging from the progress of construction, the fact they are not working on a completely new ride system (DHS has one already), and my experience following theme park construction for the past 15 years I believe they are going to hold off on this ride for 2023 as to avoid it opening to close to the DCA avenger expansion with Spider man. My guess and hope is that the big Avengers ride at DCA is eyeing a 2025 opening, more or less. Princess and the Frog will probably fill in for 2024 or 2022, with the first avenger phase being 2021 of course.

It’s great to see them working on Mikey & Minnie Runaway Railway. When do you think they will finish the first phase of Avengers Campus. Before the park shut down in March, because of the pandemic, they must have been close to complete. Since it would have originally opened in July.

got a ride on the FL version last week on my first trip to hollywood studios since the parks reopened. have to say it's unique and fun and exceeded all of my expectations. it is a welcome addition to the parks and great fun for the whole family. i got to experience symbolica at efteling in 2018, and whereas mickey and minnie is not quite to that level, i am happy to see more of these trackless ride systems being installed. sadly, i was not able to make it on rise of the resistance. maybe next time.

Great to see Disney create attractions based on their roots rather than acquired IP.

I'm curious, does anyone know how tall the show building is going to be? The steel column in the photo rises higher than I would have imagined. The Florida version has the Theatre facade to block the show building, something similar will be needed here.

@Tortuga_Mickey- The Toontown "grass mountains" will block the show building to the guests. The construction photo makes it seem that the show building is actually kinda far away from the back of the land. Using google maps (Yeah I know, what a strong source) it seems like its about 50 feet away from the closest point you can get to the attraction from within the land. But if the entrance to the attraction is at the Gag Factory then I no doubt guests won't be able to see it.