September 28, 2020, 4:45 PM · A couple of days after a confirmation of the new coaster leaked online, Universal Orlando is now sharing official concept art and video for its upcoming Jurassic World VelociCoaster.

The Intamin coaster will feature two launches — with one reaching 70 mph in 2.4 seconds — on a track of more than 4,700 feet, with a top height of 155 feet. That 155-foot Top Hat feature will be joined by a 360-degree barrel roll above the Islands of Adventure lagoon and a zero-gravity inverted stall which Universal calls "a jaw-dropping maneuver that is the first of its kind."

And Universal said today that there will be "just a lap restraint holding [riders] in place." 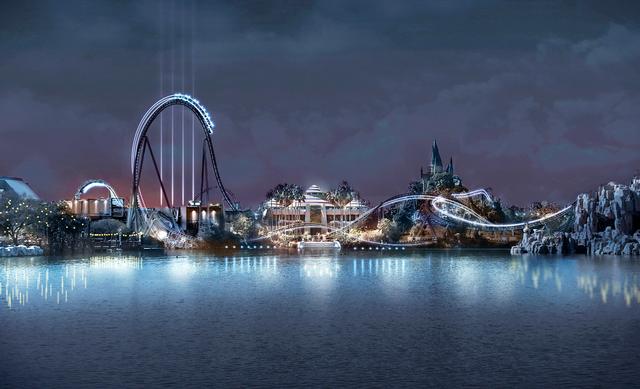 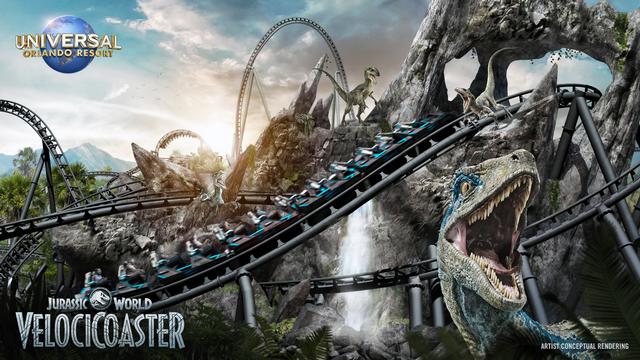 And the hype video, with on-ride POV concept imagery.

"Guests will join the original cast of the films – Chris Pratt as Owen Grady, Bryce Dallas Howard as Claire Dearing and BD Wong as Dr. Henry Wu – as Jurassic World unveils the next evolution of its 'carnivore expansion': the VelociCoaster, where riders embark on a high-speed chase and feel the rush of the hunt while racing alongside a nimble Velociraptor pack," Universal said in its press release.

While the leaked webpage last week said that the ride would open next summer, today's press release commits only to 2021 debut for the coaster.

Yup! Another new attraction victory by UOR over WDW and MK’s Tron Coaster. Head to head it’s not even a contest. GAME OVER!

Wow, they were building a velociraptor themed rollercoaster? What a surprise!

Jokes aside, it looks wonderful. Wish they'd update the rest of the area to theme it to Jurassic World, tough, as it's weird to have it as both World and Park.

Awesome ??- Hagrids this and Hulk !

Mr. Schneider: "Another new attraction victory by UOR over WDW and MK’s Tron Coaster. Head to head it’s not even a contest."

I Respond: You seem to have overlooked Guardians of the Galaxy: Cosmic Rewind coming to EPCOT.

I agree with TH. Yes definitely Velocicoaster will be more thrilling than Tron and what Guardians appear to be. But in levels of overall experience we will still have to wait for guardians. It is really interesting to see the train design, it’s very modern and those lights on the train at night will add to the aesthetic. I also noticed those fire thingys (no idea the correct term) at the entrance of the queue. If they will actually be working daily like the Jurassic Park/World ride at USH, then that’ll be great.

I do like Universal, but there is just such a saturation of "screen" ride and coasters. They need to start balancing it out more. Universal has beyond a doubt proven they can create unique ride systems and great experiences. This is kinda a letdown after seeing what they did with Magic Motor bike.

Still think they should take out the ride system at the JP river adventure and redesign with a State of the art ride system.

Guardians of the Galaxy: Cosmic Rewind, when does it open, 2023 or 2024? WDW is behind yet again. AND it won’t be nearly as awesome as VELOCICOASTER!

As a coaster, VelociCoaster completely blows away anything Disney is currently working on, and I would even say that Busch Gardens Tampa probably lost their opportunity to host Florida's best roller coaster by not opening Iron Gwazi this year. As an overall attraction, it remains to be seen whether or not Disney's rides will be better. Either way, the fact that central Florida is opening three world class coasters next year and one afterward in 2022 is amazing, especially given that amongst all the parks they only built three major coasters throughout the entirety of the 2010s.

As for me, I'm planning to upgrade my ticket to an AP when I visit Florida next month and then plan a long weekend return next summer (ideally June) to hit Ice Breaker, Iron Gwazi, and VelociCoaster. I'm fine waiting until my originally planned 2023 return to hit Guardians and Tron, but don't want to wait that long for this one.

I have no doubt this is going to be an awesome coaster but to say its going to blow away anything Disney is doing is like comparing apples to oranges. Disney doesn't really make rides like this. Yes they have Rockin Rollercoaster, Tron, Space Mountain, Guardians, and Everest, but those are also much more thematic and about the overall experience much moreso than track layout (all of which are relatively uninspired).

Don't get me wrong i've ridden the Japan version of this ride which is a crazy intense B&M Flying Coaster, and its an awesome ride, but if Disney World was building rides like this would ruin what makes Disney World Disney World. But its fine for Universal.

When this is done we have a great replacement for dueling dragons (yeah I still call it that). Hagrid's is just a stunning family story coaster with a ton of special features and animatronics.
And now the VelociCoaster that goes trill wise above the best of the 2 DD coasters. I wasn't expecting all this theming but it is going to look stunning. It will add a ton of kinetic atmosphere and excitement to and unused area in the land. An it's shows again that a good rollercoaster and stunning theming trumps a contained coaster in a box.

So we would have Ratatouille and TRON in 2021 -- along with HarmonioUS, which will be a gate-crasher. Then Guardians in 2022. Followed by the worldwide marketing blitz and new entertainment for the company's 100th anniversary in 2023.

UOR has VelociCoaster -- which I am certain will be outstanding. And, hopefully, the company will announce what is up with Epic and whether or not to go in another direction (for example, blow up KidsZone and build the UOR edition of Nintendoland).

It's all good in Orlando.

I'm super excited for this ride, but I'm more interested for the implications it has for the overall land. I mean, Jurassic World and Jurassic Park, while still having dinosaurs, have very different aesthetics. I can easily see them redoing the rest of the Jurassic Park area in 4-5 years. Maybe their original plan was to redo most if not all of it at once, but they definitely wanted VelociCoaster to coincide with the release of the third Jurassic World film. They probably just wouldn't have been able to do it all this soon, especially now due to their future plans changing thanks to COVID.

I concur with OT. The themed elements and dark ride segments of UOR's VelociCoaster and Disney's GOTGCR are going to add an exciting dimension to these two awesome coasters.

I'm a little disappointed that Universal wasn't able to execute the rumored gyrosphere look into VelociCoaster. It was pretty clear when track started going vertical that the installation wouldn't be able to support wing-coaster-style trains, but in my mind, that would have been the cherry on top to make this a one-of-a-kind experience.

I just hope that UC doesn't have to deal with the same issues that have plagued Hagrid's and the ever-present reliability issues with Intamin coasters. A 70 MPH launch suggests the potential for even more issues with the LSMs than Hagrid's deals with, so hopefully VelociCoaster with designed was lessons learned from IOA's most recent addition.

As much as I’m looking forward to Tron and Iron Gwazi, this is the coaster that has me really excited! Can’t wait to see this thing, all themed up and in action.

I agree with @the_man. Disney has never been about thrill rides like this or Six Flags type, that's never been their brand. Sure, we love some fun stuff like Rock n Roller Coaster but they prefer more themed rides, family fare, etc. That's always been a difference of them and Universal as IOA has emphasized the thrill stuff more, which is good but it's not like Disney is being "beaten at their own game" on this as super-coasters aren't their speed in the first place.

I agree with the_man as well. Ultimately I see Universal and Disney as both complementary and competitive. Disney focuses on Family with Thril as an also-ran, universal do the reverse. All in all everyone wins.

@Chad H ... I've been saying the same thing on this site for YEARS!

You (and Mike W, for that matter) nailed it

This ride looks pretty awesome! I’m looking forward to going on it! What is Universal Studios Hollywood planning for the future? I know they rethemed Jurassic Park to Jurassic World. Is there anything else planned in addition?