A Tough Day for Cast Members at Walt Disney World

September 30, 2020, 6:53 PM · Cast members welcomed thousands of guests to the Walt Disney World Resort's Magic Kingdom this morning. But some of those smiles came with gritted teeth under those masks, as Disney employees were still reeling from news that the company would be laying off approximately 28,000 workers.

Thank you to Theme Park Insider readers in the Orlando area who have been emailing updates and photos from the parks, as I remain at home in Southern California. Again, average crowd levels in Central Florida appear to be rising, as more fans find their way back into the parks following their capacity-controlled reopening in July. But attendance levels remain far below their traditional — and budgeted — levels, which no doubt contributed to Disney's call to fire what looks to be a double-digit percentage of its theme park workforce. 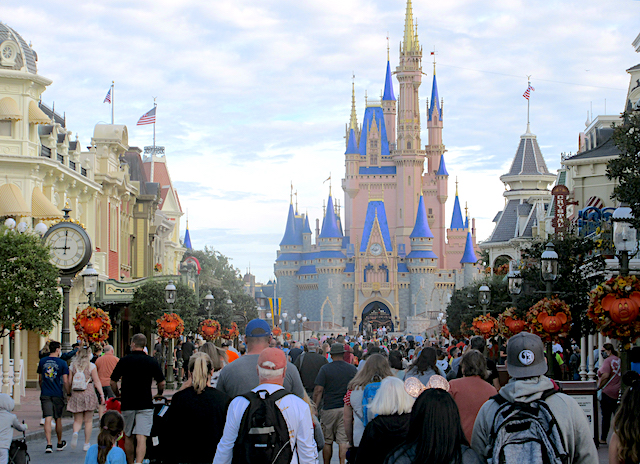 Rumors among Disney World cast members earlier today has most of the layoffs happening in Florida, but we now know that will not be the case. As a result, many Orlando-area cast members said they are feeling anxious about the layoffs, waiting to hear whom will be dismissed. 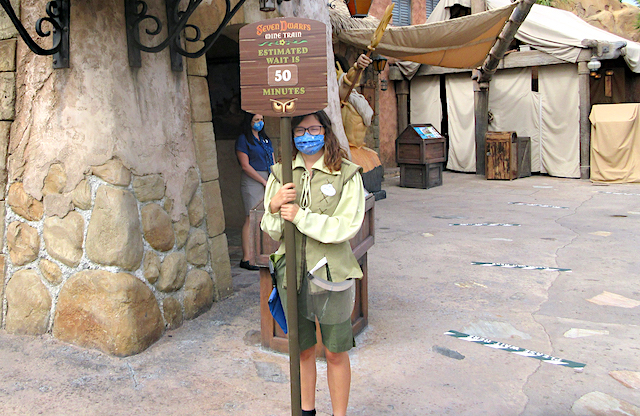 Wait times are up but not too bad compared to "normal" levels. But the need for physical distancing has pushed lines to unprecedented lengths.

Several cast members said that they've been on reduced hours with no ability to pick up extra hours in recent weeks, which raised suspicions that layoffs were coming. People are wondering if they will ever see furloughed cast members back at work again. Others are concerned that being recalled is no guarantee that they will escape the layoff. Even managers are concerned about redundancy.

One cast member said that his love for Disney can no longer outweigh the uncertainty, so he's now looking for work outside the company. 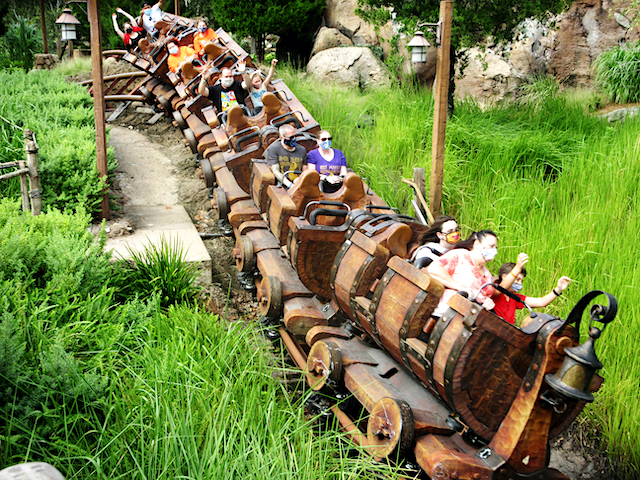 Still, it's Disney, and people are enjoying themselves on the attractions, such as Seven Dwarfs Mine Train.

We have been tracking the layoffs today and the latest numbers are 6,390 non-union employees to be dismissed at Walt Disney World, with 2,765 non-union cast members and an estimated 3,400 union employees slated for dismissal so far in California. But that's less than half of the 28,000 workers expected to be let go, the bulk of which appear to be union-represented cast members in Florida.

It's interesting to compare this site with other sites reporting about CM layoffs. Four articles posted since the layoffs were announced and all seemingly political.

Meanwhile, Disneytouristblog and Allears have articles up about ways you can support cast members during this crisis. Nothing political in site either...

What about the first three? Still nothing on how to help CMs I see. You are quick to sensationalize and capitalize on the headlines, meanwhile 28,000 will soon be out of work and no effort to support. Seems to be all about the clicks for you.

I guess I prefer to write about news and things that affect people’s lives more than virtue signaling.

Look, I’ve tried some of these crowdsourced charity appeals in the past. I click-tracked them. They deliver a pittance compared to what government and foundation support can deliver. If I am going to endorse a charity, I want to be certain that it will deliver a real, positive impact first.

If all I wanted was clicks, I’d play the virtue signaling game, too. They do drive traffic more than donations, after all! But I would rather center the voices of cast members (as in this article) than exploit their need in a drive for clicks.

I would argue exploiting their need is exactly what you've done by posting (3) previous articles detailing the Disney layoffs. It was very kind of you to finally give them a "voice" with this 4th article. At the end of the day there are many who have no idea whether or not they are the casualty of this mass layoff and yet you post about it because you know about it. You need to get the story out like the rest of the media and God forbid you don't write about it before the dust settles.

I promise I'm not trying to be as antagonistic as it sounds. It just frustrates me when someone runs a website and pats themselves on the back for being different. When really at the end of the day they're the same. Everyone wants the readers and clicks.

@AndrewL give it a rest, Robert has done nothing wrong here, his coverage of this issue is proportional to its magnitude in the Theme Park industry, which is what this blog is about. You would have done it different, fine - start your own blog and write some articles but don’t direct others as if your opinion is fact.

Robert, thank you for the balanced coverage as always.

>> Look, I’ve tried some of these crowdsourced charity appeals in the past. I click-tracked them. They deliver a pittance compared to what government and foundation support can deliver.

I’m an employee for a welfare rights/debt advice charity, this is 100% correct.

It’s good of people to give money to charity. However the existence of a charity indicates there is a failure in the system and our society. Foodbanks exist because we do not adequately ensure people have enough to live on, my charity exists because the welfare and debt processes are too hard for anyone who doesn’t make it their life to follow, an environmental charity exists because the environment isn’t adequately protected.

The true solution is in the politics, and fixing the system, not a patch job to avoid the whole thing sinking.

I appreciate this site, this article; thank you for keeping me informed as I try to stay on top of these latest developments. It’s painful to know so many cast members will be impacted. In all honesty, I do not always want a site to tell me how I can give. That said, I also appreciate the heads up in the comments mentioning DTB (I read it regularly but less frequently than TPI; both are included in my list of favorites). The inclusion of such information within comments allowed me to jump back and forth: I’ve already gone to that site and utilized its recommendation for giving by way of Second Harvest. Perhaps more of us simply providing additional info and options is a great balance; it sure worked in this case. Thanks, Robert, as always, for the great article - and for not including options to give. Thanks, Andrew, for the heads up on how to give - it worked! And shows how interactive readers can also “contribute.” No politics - just people. To everyone enduring life in a pandemic: stay safe!

I have read and re-read this article several times and, for the life of me, cannot see any political angle. The article simply conveys the gravity that Covid is having on Disney's theme park sector resulting in a necessity to downsize their workforce by 28,000.

R. Niles: "... which no doubt contributed to Disney's call to fire what looks to be a double-digit percentage of its theme park workforce."

Me: "Fire" implies dismissal for cause. Poor choice of words.

+1 for not seeing any political tone in this article

I don't necessarily see any overt political leanings, but I haven't seen R. Niles take the California government to task for not being transparent in their precise concerns about re-opening the parks or what exactly their health officials are doing when they say they are working as hard as they can. Those general statements seem to pass muster in these blogs.

This article was not political and I obviously chose the wrong one to comment on.

That being said I'm not going to keep remarking the same things. As Force500 states as long as all information is available to people that's all that matters.

Robert: Keep up the great work. I don't mind reading other comments, but I think the readers can see through the negative comments. We all support the CMs. They are what make Disney Great. I can also see why Disney needs to make some hard decisions.

Political? We can make everything appear to be a political decision. I'll leave that alone, and pray that all the CMs are back to work real soon.

Does Disney Need a Different Strategy to Get Parks Reopened?