PY Gerbeau, a former vice president of operations for Disneyland Paris who now is heading The London Resort, talked through some of those plans during the Blooloop V-Expo this morning. He focused on development outside the park's two planned theme park gates, which will open in phases.

"We hope to create new excitement and a new concept on how you interact between what is a top theme park with what's outside the pay line, which creates a destination," Gerbeau said.

"We really want to make sure there's almost as much as happening outside the gates as inside."

Gerbeau said the idea is to blur the line between the Main Street-type entrance plaza within the park with the CityWalk-style dining and shopping outside the gate, to give visitors a "taste" of the in-park experience even if they don't buy an admission ticket. 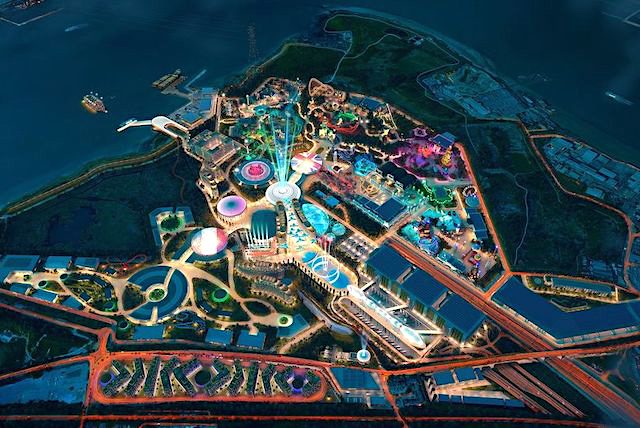 The resort's entrance will feature a transportation hub that encourages visitors to arrive by mass transit rather than private car. From there, visitors will walk through a covered plaza, flanked by a hotel and lined with restaurants, on their way to the parks. The as-yet-unnamed plaza's covering will be designed to look like a flock of birds in flight and will offer a music performance venue as well as Europe's best sports bar. (Though, to be fair, Gerbeau said "there wasn't much competition" for that honor.)

Gerbeau said that The London Resort will offer people who dine at the exterior plaza the opportunity to pre-book experiences on some of the theme park's top attractions, entering through a "back door," to entice more London area-residents to visit and give the resort a try. Also in the plaza will be a large esports colosseum, which will allow visitors the opportunity to play as they await their return times in the park's virtual queues, Gerbeau said.

At last year's Blooloop conference, the resort revealed its line-up of themed lands for its first theme park, which at one point in the development process was going to be branded to Paramount Studios. A second theme park is planned for a future phase. Once plans are submitted and approved, the resort and its first park will begin a two-and-a-half year build-out, Gerbeau said.

"We're obviously doing our best to deliver the zillions of documents required to satisfy all the inquiries that's going to follow for the next year or so. But then, we're existing. This thing is happening."

I hope of this gets build, and when it finishes and opens, it will be amazing as the initial concept art was. But I have a feeling it won't live up to that.

@OT: The nature of the business: So many beautiful concept ideas hitting the realities of budget, construction, etc.

This thing is still on???

Surely Transport for London do that already by making it financially impossible to do anything but take public transport. The Congestion zone and emissions zone charges are extortionate.

I’ll be utterly amazed if this actually comes to fruition! It’s one of those projects that seems to pop up from time to time and makes you think “oh. This again”.

If this thing actually happens for 2024, as seems to be the latest plan, then the resort — through dumb luck, most likely — would have benefitted greatly from its years of delay, now potentially putting its opening on the far side of the pandemic, perhaps smack in the midst of a global tourism recovery.

I love the concept. The idea of having a shopping venue part inside part outside the gates is very clever. Shanghai Disneyland has something similar. The idea of allowing shoppers to experience some of the theme park attractions without paying the entrance is also very clever

With most sales moving online, brick and mortar shopping venues will need to rely on other experiences to attract customers. Maybe this could be the key to finance new theme parks or theme parks attractions in the future, especially in big metropolitan areas.

They could separate the two theme parks concepts. One could be an indoor park, with mostly dark rides, that could operate year long, no matter how clod (or hot) the weather is. The other could be a more sparse outdoor area, with lots of trees and green areas, resembling a city park, with roller coasters and open attractions.

Finding the Hope in a Flicker of Joy