November 16, 2020, 9:34 AM · Disney Parks, Experience and Products Chairman Josh D'Amaro kicked off the IAAPA Expo Virtual Education Conference with a keynote address that was both optimistic and defiant, while also providing an update on new Disney attractions around the world.

D'Amaro spoke from the Disneyland Resort in his pre-recorded presentation, giving fans a look at the upcoming Avengers Campus at Disney California Adventure, among other sites.

You can see the recently installed Quinjet over D'Amaro's shoulder in the screen capture above. That was just one of several upcoming projects that D'Amaro previewed during his talk. He also provided fresh looks at the Worldwide Engineering Brigade headquarters that will be the home to the new interactive Spider-Man ride at DCA. 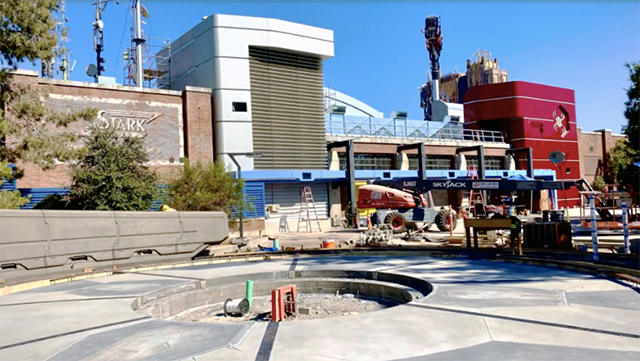 As well as the attraction's ride vehicles, on track. 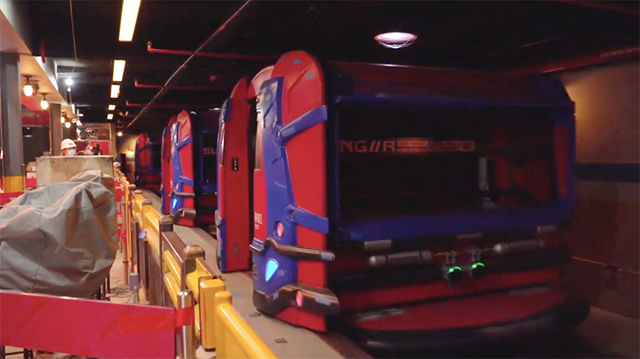 D'Amaro also shared video of the "omnicoaster" cars in action on the upcoming Guardians of the Galaxy Cosmic Rewind coaster at Walt Disney World's Epcot. 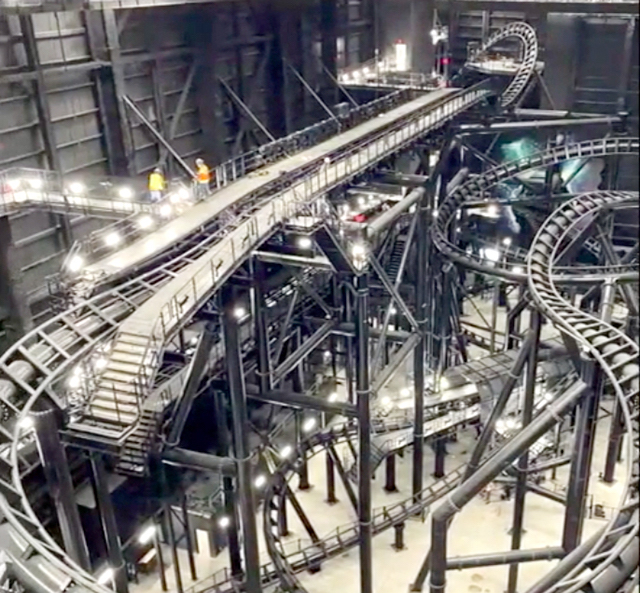 Inside view of the coaster track

We now can confirm that the ride will open with backward launch that will see the cars rotate 180 degrees as the reach the top of the ride's first hill.

D'Amaro also shared a photo of a physical mock-up if a cabin guest room inside the Star Wars: Galactic Starcruiser hotel now under construction at Walt Disney World. 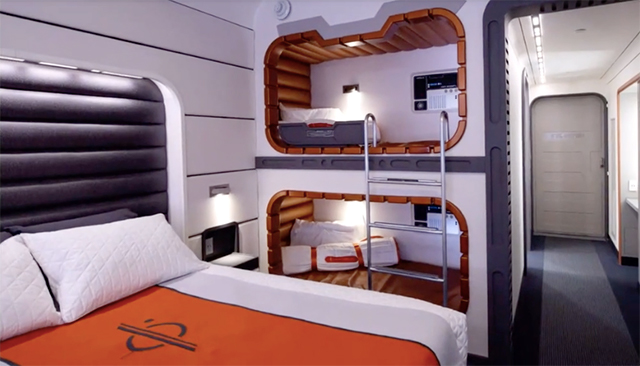 Yet D'Amaro's presentation included no visual or verbal references to the TRON coaster at the Magic Kingdom, which should fuel rumors that the project is being mothballed and will not open for the resort's 50th anniversary next October 1, as had been expected. The projects that D'Amaro confirmed as going forward in his presentation were the Avengers Campuses at Disney California Adventure and Walt Disney Studios Paris, the Cars Route 66 makeover of the Studio Tour at WDSP, Mickey & Minnie's Runaway Railway and the Disneyland Hotel DVC tower at Disneyland, Zootopia at Shanghai Disneyland, Fantasy Springs at Tokyo DisneySea, The Art of Marvel Hotel at Disneyland Paris, Guardians of the Galaxy Cosmic Rewind, Remy's Ratatouille Adventure, Harmonius, the Space 220 restaurant and the new entrance at Epcot, and the Star Wars hotel. And the "Princess and the Frog" makeover of Splash Mountain is still on, too.

D'Amaro only provided an opening date estimate for the Ratatouille attraction, which he said remained on schedule for a 2021 debut.

"Our properties have been likened into small cities," D'Amaro said, quoting California Governor Gavin Newsom's frequent explanation for why theme parks present a complex challenge for reopening during the pandemic.

"Walt Disney World property is nearly twice the size of Manhattan. We have a bus fleet the size of Atlanta. And if we counted all the boats at Walt Disney World, we'd have the seventh largest naval fleet in the world," D'Amaro said. "But unlike a real city, we can choreograph the procedures under which we actually operate. We can manage and control attendance, enforce protocols and adjust operations specifically to our business and our experience, and attractions can be modified to comply with safety recommendations."

D'Amaro again expressed the company's disappointment that it has not been able to reopen its California parks and that it has been forced to close its parks in France once again. But D'Amaro closed his presentation with a note of optimism and a challenge to the industry.

"When your foundation is rocked, but that foundation shows that it can withstand constant tremors, when your guests show their passion and yearning for your experiences, even when the gates are closed, when your cast members accomplish things in one week that would normally take a year, when you realize that the unthinkable or the impossible, or very much possible, then you have to ask yourself — what's next?," he said.

"Where can we go from here in the world that we find ourselves in today? Optimism, innovation, and courage — they will ultimately win the day. And at Disney, we aim high. At a recent town hall meeting, I had some Imagineers that I was speaking to, and I included my presentation with a simple call to action — I dare you. I dare you to dream bigger and differently. I dare you to say what you've always wanted to say. I dare you to throw out that dogma that has sometimes acting increments, rather than exponentially. I dare you to make yourself weak in the knees. I dare you to dare yourself.

"It's easy to get protective and defensive during a crisis. And while it's necessary to some extent. I believe that a crisis also creates opportunities for us to reinvent ourselves to think of our business and our industry in brand new ways. I dare us. I dare this industry — stand proudly on the foundation that we've built. Climb up on the shoulders of our legends. And then fly."

The IAAPA Virtual Education Conference this week replaces the annual IAAPA Attractions Expo in Orlando, which was canceled due to the ongoing pandemic.

It will be a shame if the 50th anniversary has construction walls around a major attraction. I’m hopeful that it is far enough along that it will be ready by next year, and if not, early 2022 (pandemic delay or not).

It's nice to see some announced progress on the attractions that Disney didn't cancel. Definitely the one to watch out for is the Omnicoaster (seriously, stop doing this naming trend, it's setting a precedent for uncreative names). I think Disney has seen the potential in this coaster model and plans to use it for other coaster attractions at other parks. In the video, it shows that on the banked turns (at least the ones shown), the vehicle faces inwards. I'm sure this'll be such a weird feeling because instead of your body turning at a diagonal angle about the heartline, like a normal banked turn would feel, you're gonna be facing downwards with lateral g's. If I remember correctly, I think Disney patented this coaster model, but if not, then I'd love to see other companies take a more thrilling approach of the model. This has so much untapped potential.

-As for the other attractions, Spider-man doesn't look all that too interesting but I have my hopes for it.
-Galaxy Cruiser looks to be an amazing immersive experience, but one that I will never try.
-I'm sure Remy's Adventure will open before Spring Break like y'all said months ago. Good call.
-and it wasn't in this article but they also showed a picture of DLP's version of Avengers Campus. It'll be interesting to see what they do the the Iron Man retheme of RNR. I hope it'll be the superior version of the RNR coaster.

Harmonius has so much potential to be a key to post-pandemic success. Once the health crisis has passed, if this show is a spectacular production, World Showcase will be packed with guests -- causing food, beverage and retail cash registers to spin like crazy. Harmonius will boost that cash flow.

Whoa, Robert, what do you mean "mothballed"? Is Disney pulling the plug on a coaster that's already built? I'm confused there. I know they pulled back the opening timeline and construction but it would seem like lunacy to outright cancel a project that's clearly already had millions poured into it. What are you hearing, if anything?

Mothballed means that construction is paused, current work is protected and the site is held in its current state until some point in the future when work will resume.

Disney clearly sees that Epcot needs help to protect and expand attendance at that resort. However, I suspect that Disney anticipates that the MK's numbers would remain pretty much the same as it forecasts in the next year or so with or without Tron, so there's no need to proceed with that project until the potential for significant market expansion returns.

Ok, whew, thanks! I took mothballed to mean cancelled entirely which would have blown my mind considering how far along it is.

@Poscott I am a former cast member, and still have a lot of cast member friends. Even the ones who are currently furloughed speak VERY highly of Josh. I've never worked with or met the man, but from what I hear from cast member friends, he's a good guy to have running the parks right now.

Good point, Robert. MK has at least twice as many ride attractions open as EPCOT and is more geared to an older audience that would rather have a thrill ride than ride the numerous flat rides or slow-moving boat rides that MK has.

The one thing about Tron being delayed is that it can still open during the 50th celebration sometime in 2022. They probably look at this as a plus in the fact that they can have new attractions in 2021 and 2022. I was planning on going next year but will delay due to wanting to ride Tron.

@Sue - The construction happening on Tron is to install the canopy and "button-up" the site so they can pause work for an indefinite amount of time. Without the canopy, the track and supports outside of the main building would be subjected to the elements, so getting the canopy installed protect that already completed work until they're ready to resume and complete the rest of the attraction. All reports are that the canopy should be done by the end of the year, at which time all work will stop until Disney is ready to finish up.

Let's Talk About the State of Disney's 'Star Wars'