May 25, 2022, 6:18 PM · The annual Frontier Festival at Cedar Point in Sandusky, Ohio, described as “a celebration of hope, health and harvest,” opens on Thursday, May 26 and runs through June 19, from 2 p.m. to 8 p.m. As in the past, Frontier Town is the center for family activities, entertainment, arts and crafts, and an ever-changing assortment of family-friendly beverages, Belly Washers (adult beverages), and Tasty Vittles such as Cherry Cola Cupcakes, smoked cherry brisket sliders and cherry buffalo chicken tenders. Cherry is the main theme, but non-cherry selections such as glazed donut bacon cheeseburgers, Barbacoa nachos and Mojo whole hog sliders with Kimchi slaw make finding a snack or a full meal simple for every hungry visitor to Frontier Town.

The Prayers From Maria Foundation is the Official Community Partner of Frontier Festival. Their goal is to fight to end childhood cancer, and the Foundation’s symbol, the Sunflower, is everywhere in Frontier Town, from spinning windmills to adorning souvenir T-shirts to a row of Frontier Festival Garden Games. 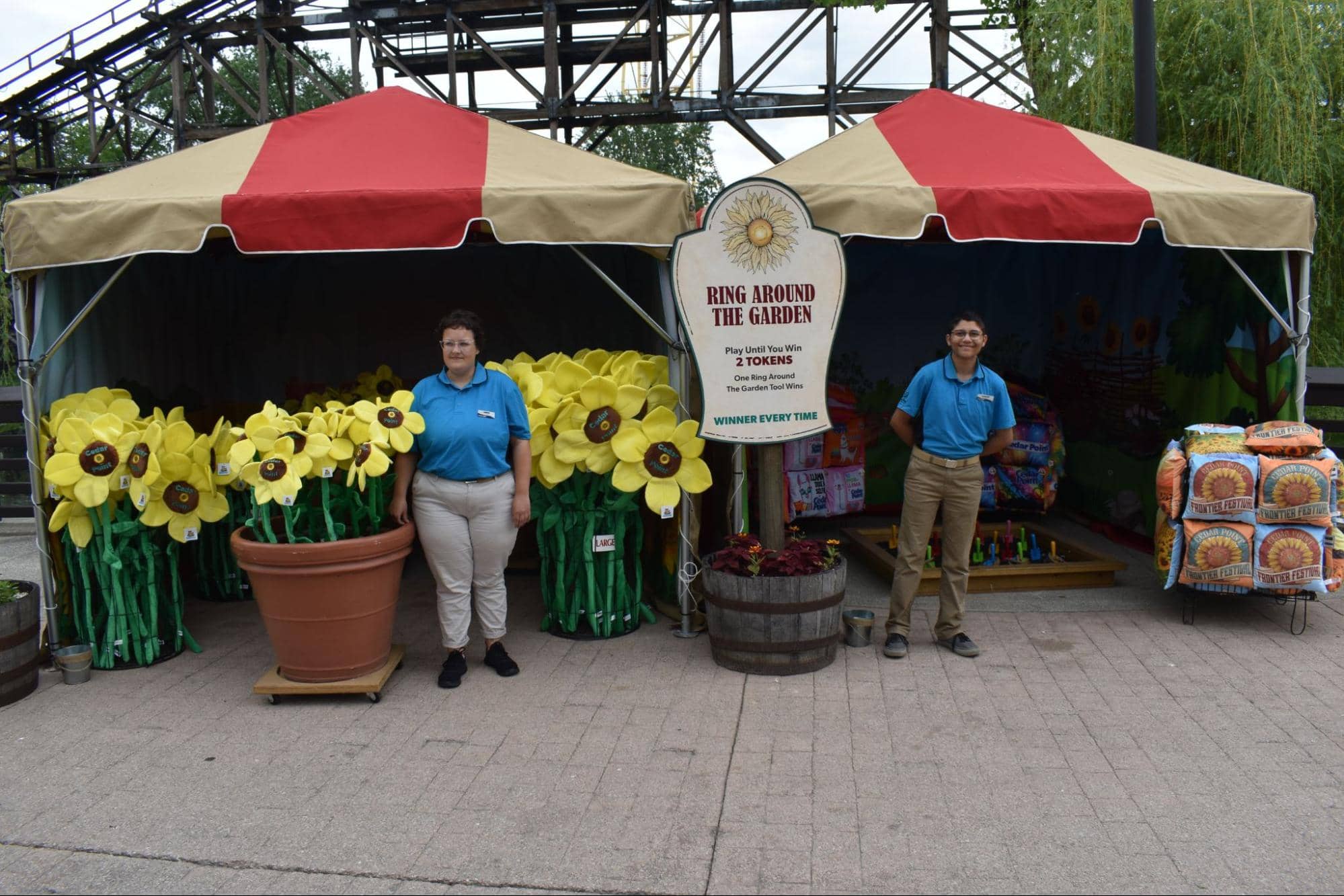 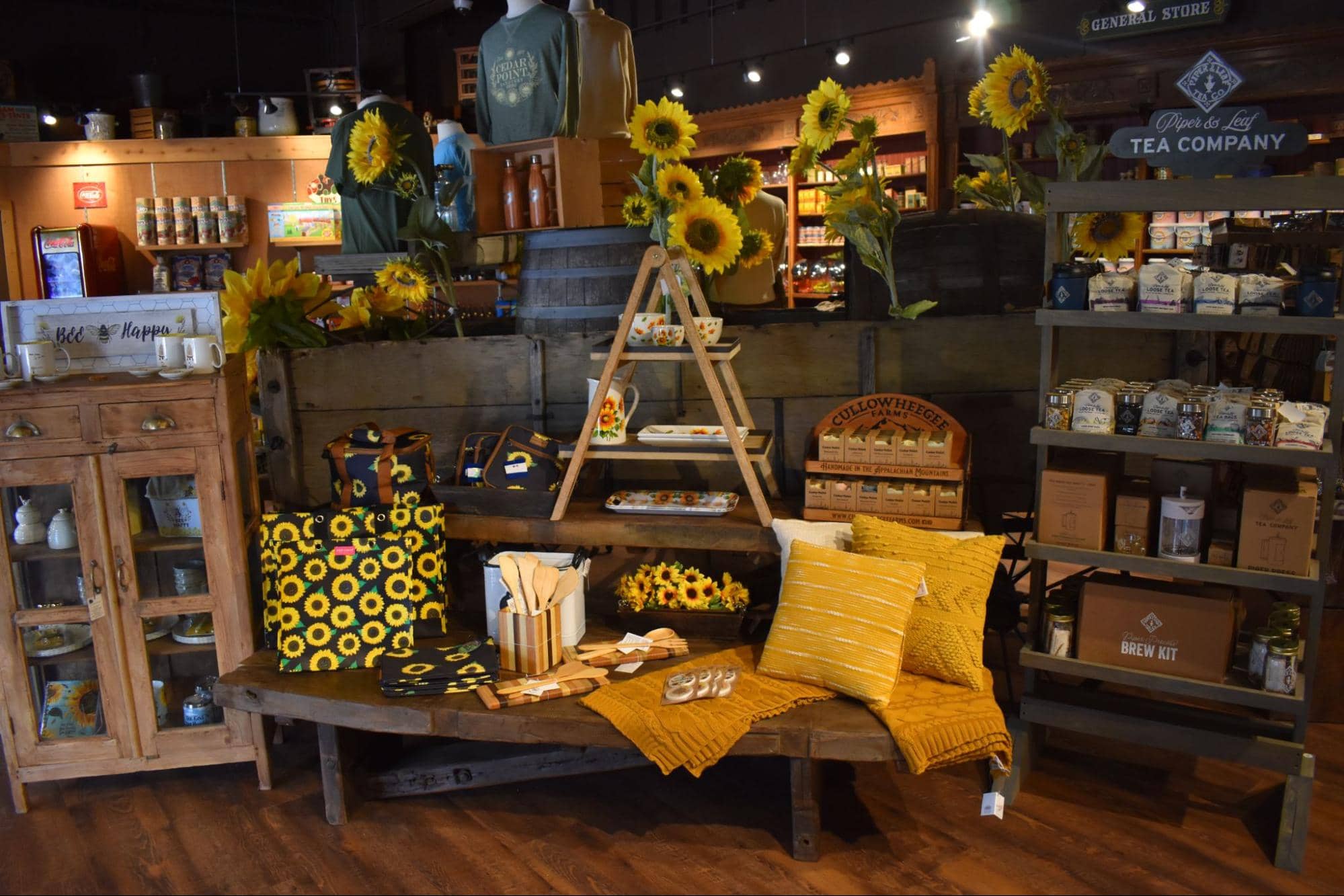 New this year to Frontier Town is the Farmhouse Kitchen & Grill, a huge cafeteria-style restaurant surrounded by outdoor dining areas, comfortable wooden chairs encircling firepits, towering trees that were thankfully spared when the Antique Car Ride that once occupied this site was removed, and even the original covered bridge that once carried guests on the car ride over a pond. 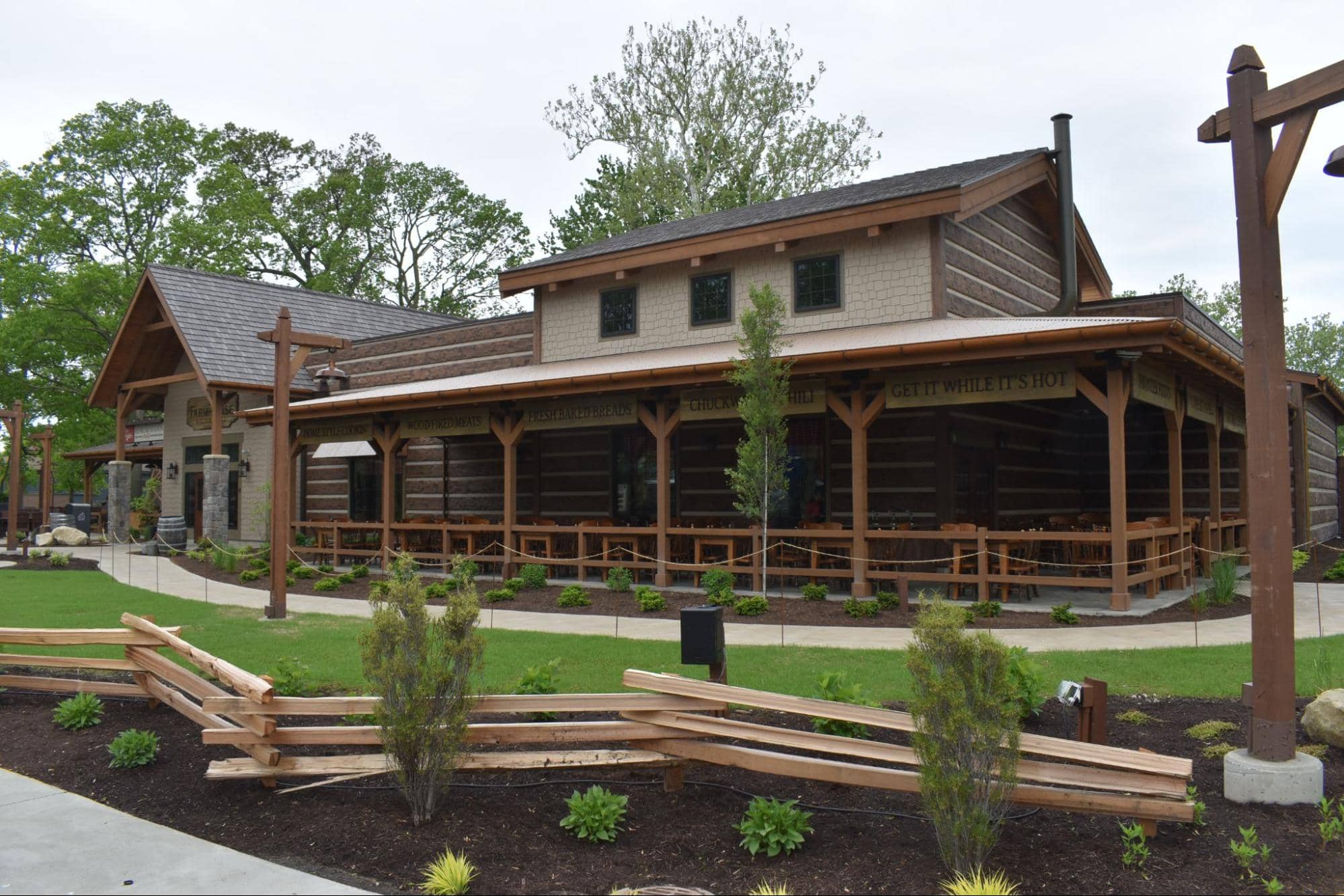 Some guests were disappointed that a restaurant was built there instead of another roller coaster or other attraction. While I can understand their displeasure, I have also seen how Cedar Point has been making major advances in the theme park food wars, and with Farmhouse Kitchen & Grill they have scored a solid home run. The helpings were plentiful, the seasonings were perfect and there was enough variety of entrees, sides and desserts to satisfy nearly everyone. 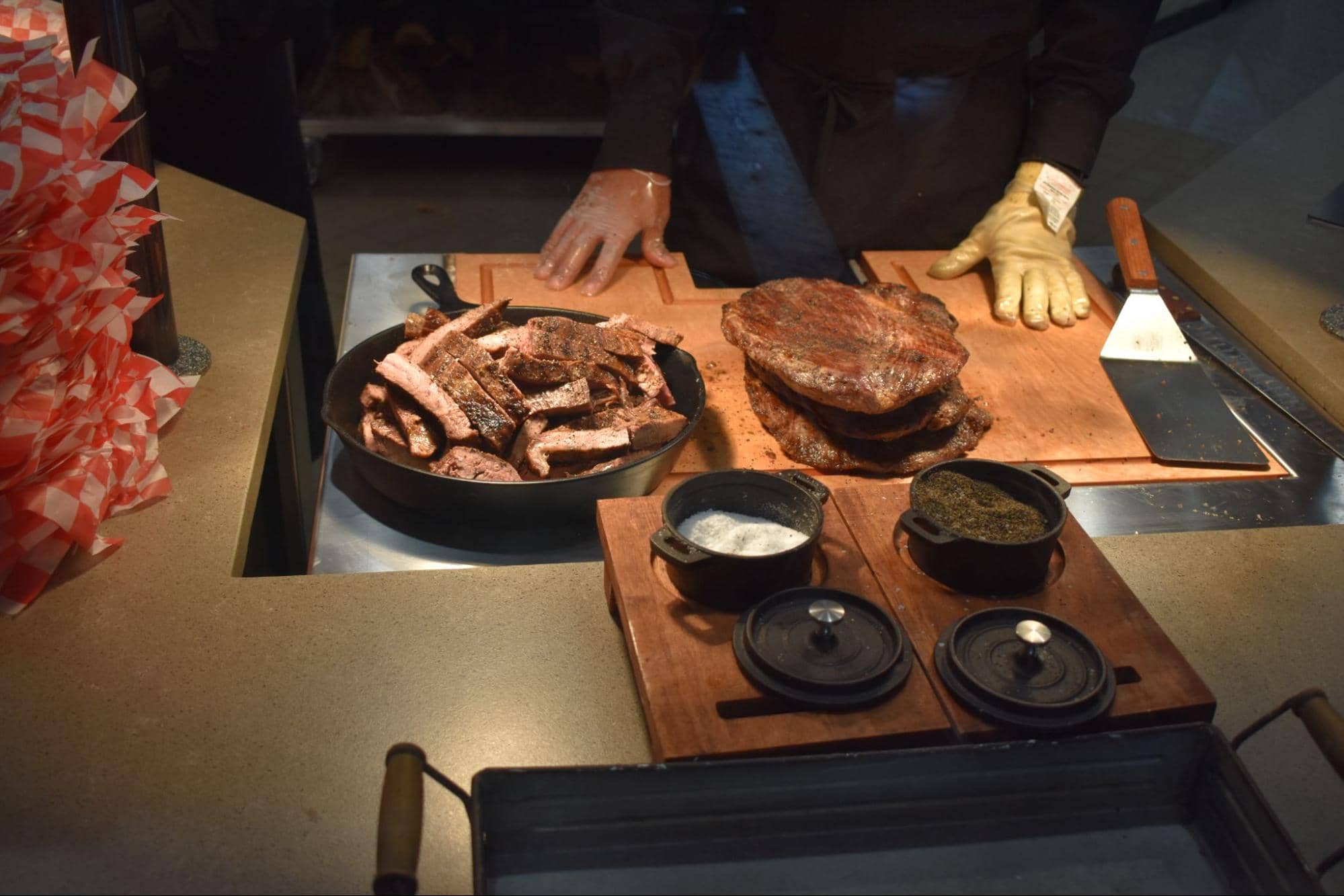 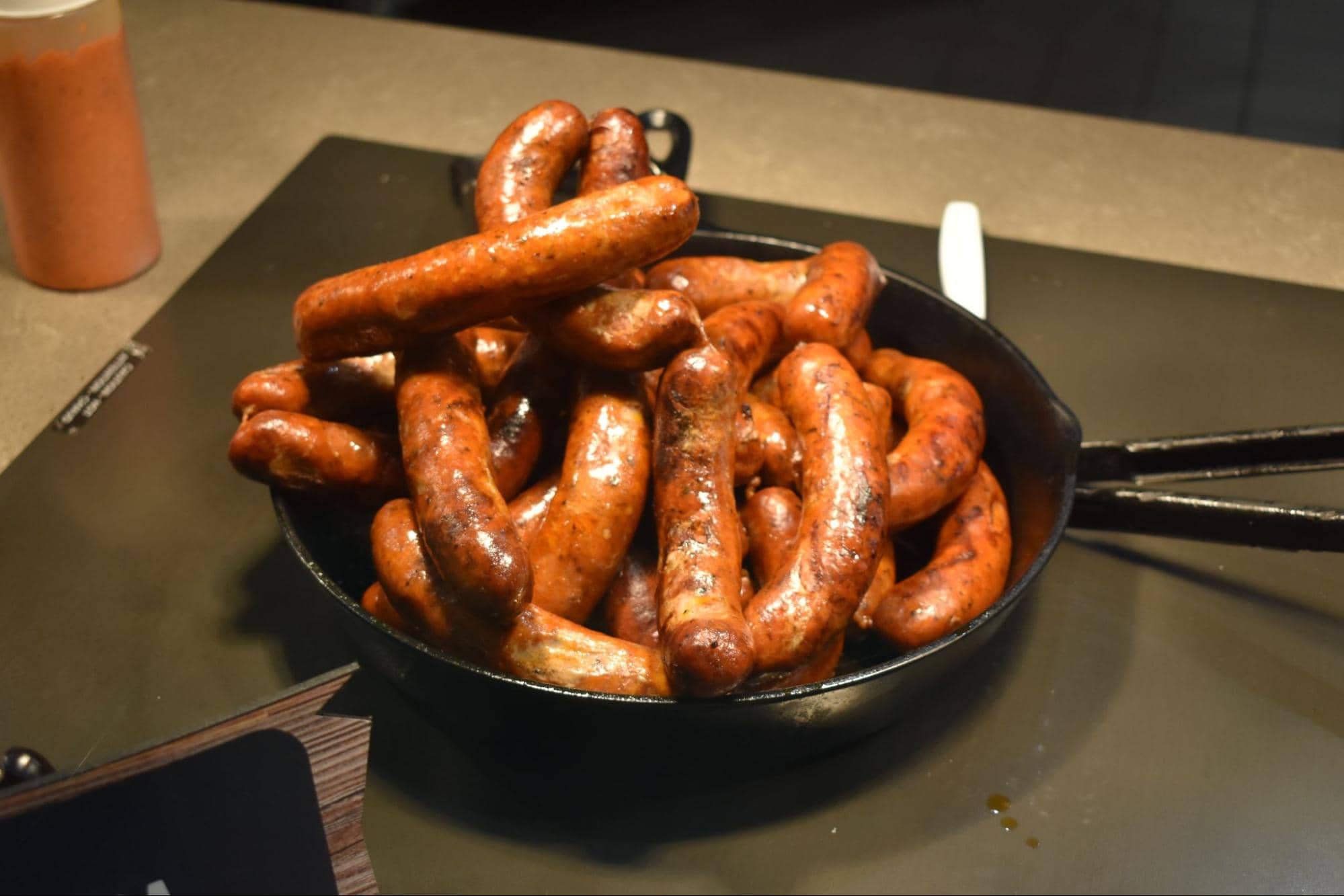 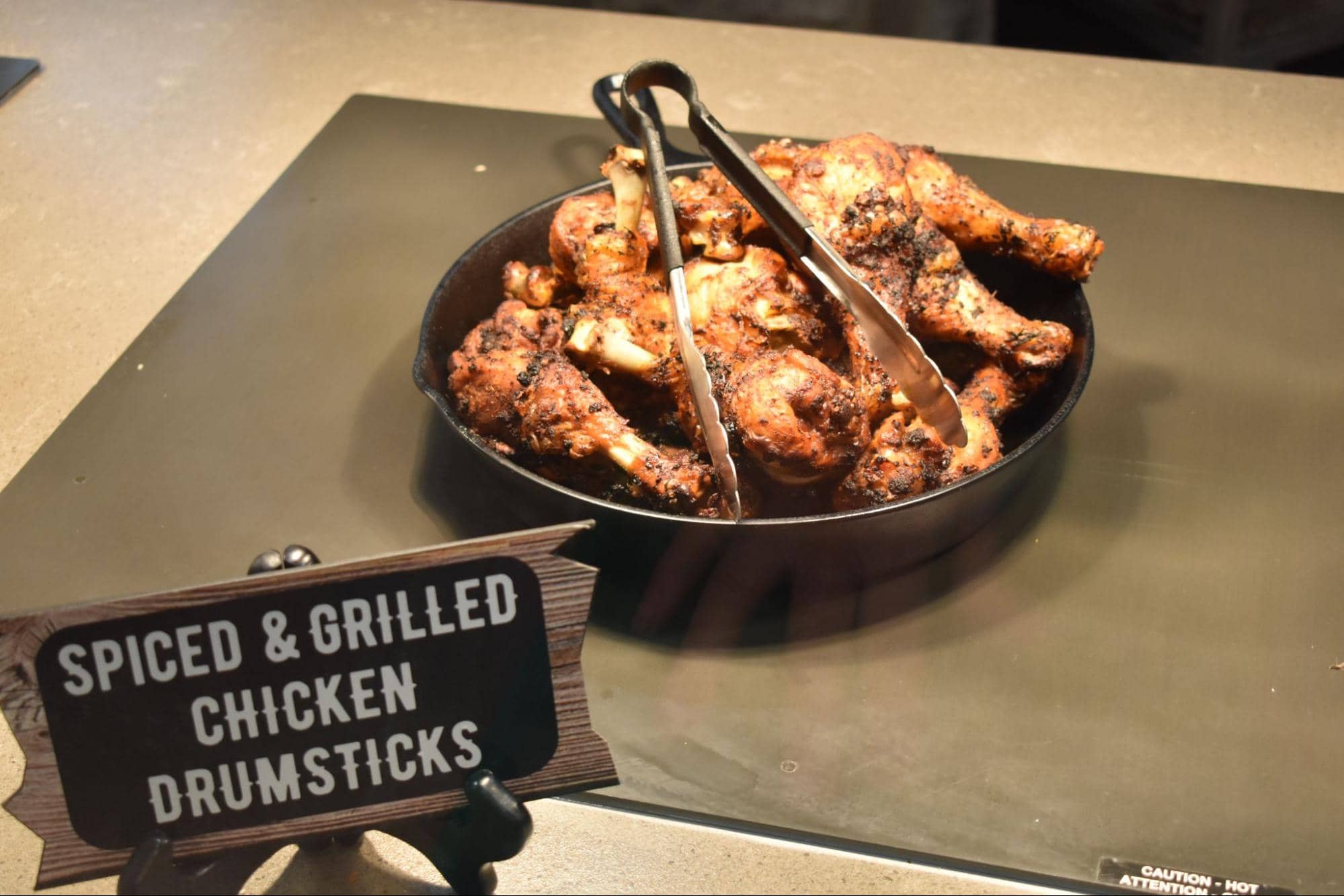 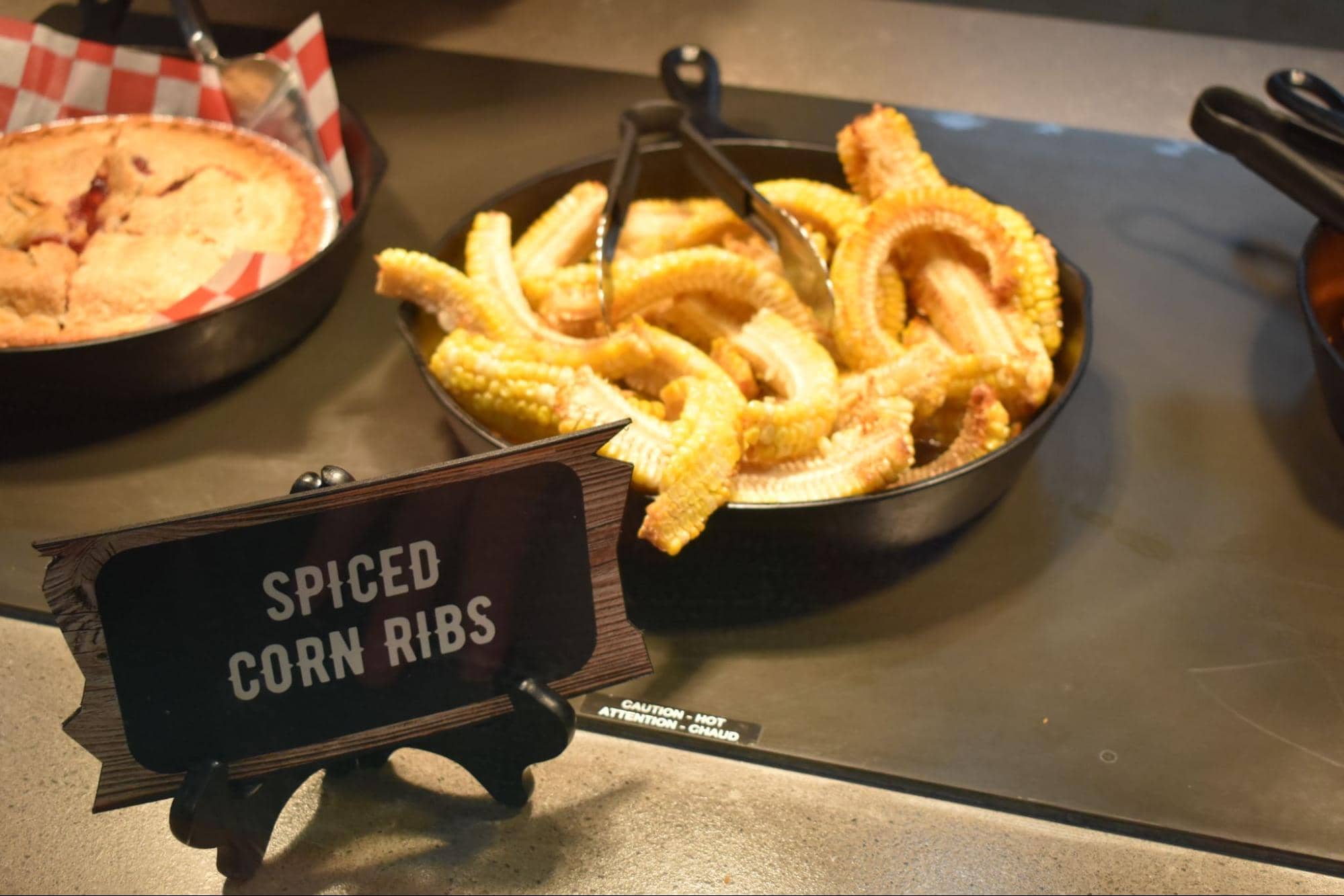 The theming of the restaurant and its surroundings is top-notch, with antler chandeliers, rocking chairs, spinning windmills and a huge steam-powered tractor resting beyond the pond. 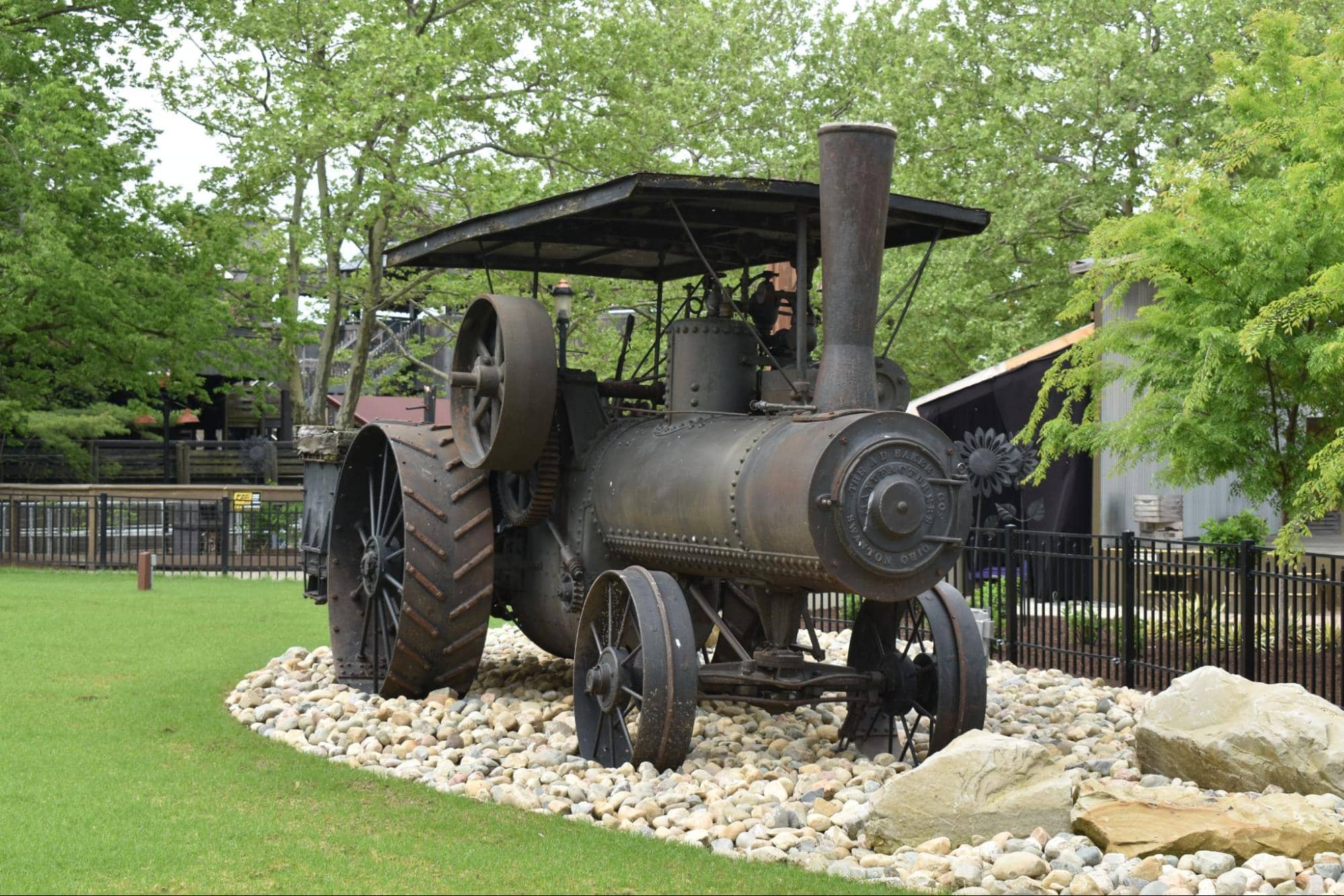 Cedar Point has progressed from a park with below-average park food to a park with so many top-notch restaurants to choose from that it will be difficult to decide where to eat. Fortunately, the meal plan is honored at nearly all of them!

On four nights in June (June 3,4,10 & 11) Frontier Town will be the site of Wild Frontier Nights, a 21-years-of-age-or-older event where, from 9 p.m. to midnight, special experiences such as mechanical bull riding, ax throwing, and unlimited ride access on Cedar Creek Mine Ride, Maverick, Skyhawk, Steel Vengeance and Wave Swinger can be enjoyed. Specialty mixed drinks such as the Lusty Lil (Crown Royal Apple and Cranberry, dusted with gold glitter) and foods not available during the Frontier Festival such as Chicken and Waffles, Juicy Lucy Mac and Cheese Sliders, and Cookie Dough Egg Rolls can be enjoyed. Special entertainment by Country and Western bands throughout Frontier Town, along with a demonstration of chainsaw carving, lasso swirling and bullwhip cracking should make it difficult to enjoy everything that is offered in the three-hour event. 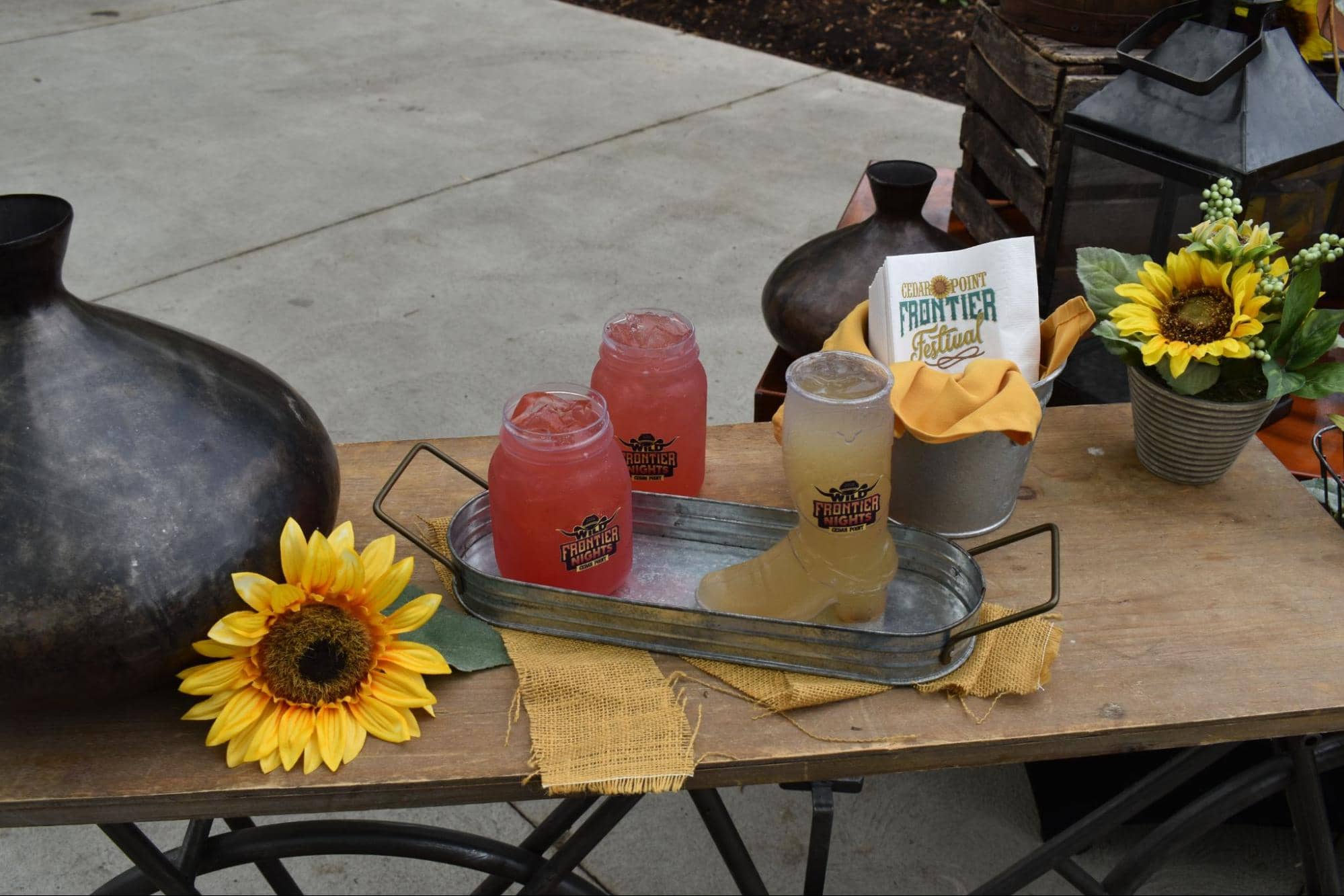 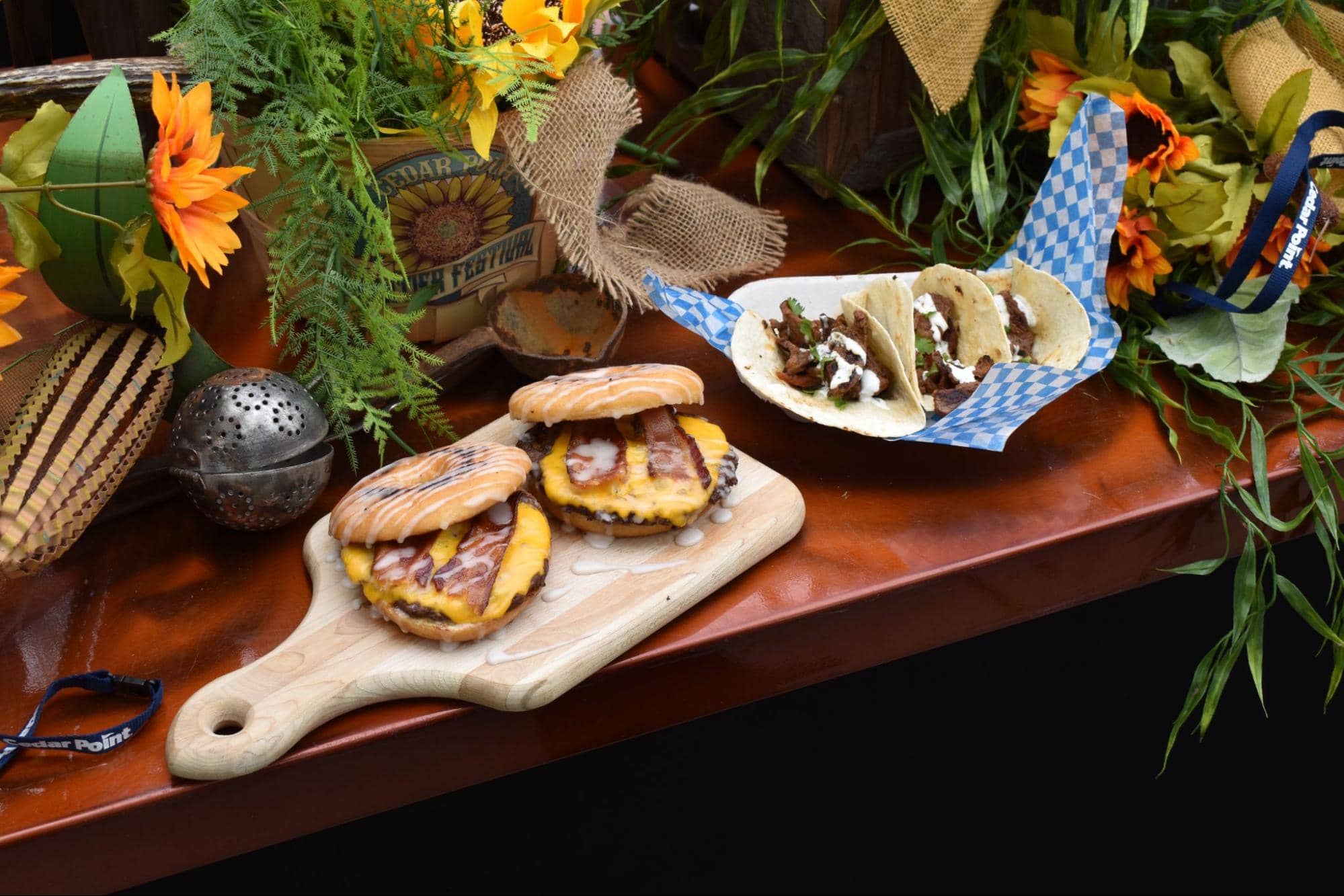 Wild Frontier Nights is, as far as I can remember, the first up-charge after-hours adults-only event to be held in Cedar Point. I suspect that this might be an experiment, to see how well it is received and supported. Daytime park admission is NOT required to attend this event, but one of three levels of event admission is required to be purchased, and they must be purchased in advance. Please refer to this site for more information: Wild Frontier Nights at Cedar Point.

I am hoping to attend one of these evenings and to report back with my impression of it. I did ask about the hour gap between when the park closes (8 p.m. on those days) and when the event starts (9 p.m.), and I was assured that anyone in the park during the day would not have to leave the park, wait outside the gates until 9 p.m., then have to come back into the park. Guests have to leave Frontier Town as it’s getting readied for the event, but could remain in the park. I’m not sure about what to do where guests park in the front parking lot, when Frontier Town is literally a mile away at the other end of the peninsula. I assume we should park in the Cedar Point Shores water park lot, which is nearest the closest gate to Frontier Town (the Gemini Gate). More information to follow.

Frontier Festival has been expanding and improving every year, and the addition of Wild Frontier Nights has great potential. The new Farmhouse Kitchen and Grill is a terrific addition to the dining options of Cedar Point guests, and hopefully the chefs can maintain the high quality that we enjoyed during our last visit. If the special foods offered at Wild Frontier Nights are as good as what we tried so far, it’s going to be a great addition to the Cedar Point experience.

Be sure to report back how Cedar Point operations go this year, James. Their staffing problems were well-documented last year and I can only hope that they're more prepared this go-around. Lines for food continue to be an issue for many parks, especially at event booths.

It’s awesome to see this kind of commitment to food and bev from cedar fair. Would not mind seeing an expansion like this on the west coast.

Will do. I haven't been there yet on an operating day, but from what I've been reading they seem to be only opening dining locations that they can staff fully. Most high schools and colleges around here have just graduated, and while in the park today I saw many groups of trainees being shown around. Several rides outside of Frontier Town could be seen testing, and I assume that staff was being trained on them.

Someone asked a senior staff member when a certain dining operation would be open, and they said that it was on a day-to-day basis. Man, I would hate to have to run a business with that sort of uncertainty. I'll see how it goes.

Jacob, we see all the special foods and events at Knott's and wonder why we can't get that in Cedar Point! Even Kings Island seems to do some things better than Cedar Point. Sometimes it almost looks like the Cedar Fair brand is a franchise.