Here Are the Top 10 Ride Queues at Walt Disney World

August 5, 2022, 5:03 PM · At Disney, many attractions start even before you board the ride. So what are the top 10 ride queues at the Walt Disney World Resort? Here are our picks.

Bonus: Jingle Cruise. The Jungle Cruise turns into the Jingle Cruise during Christmastime, and it’s a fun sight to see. Every area is decked with lights, even adding some those old-school ceramic ones, along with holiday memorabilia strewn across the place. I always spot something new every time I go in line. Grab a hot cocoa and be sure to check this one out when you can. 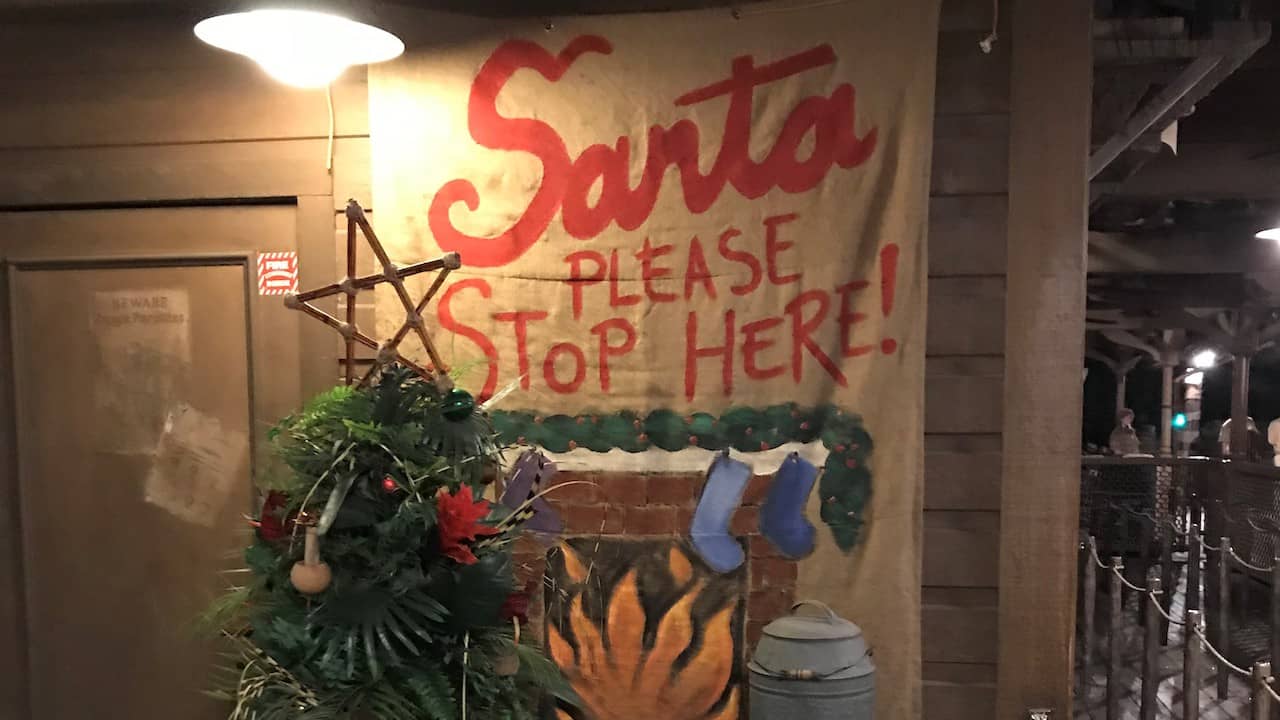 10. Haunted Mansion – The Haunted Mansion queue is an all-time classic with one of the first queues to incorporate a pre-ride show. Best viewed at night, but delightfully dreary during the day. You come into the queue looking at the ominous Haunted Mansion and travel through the graveyard. Then, when the time is right, the giant mansion doors will open where you will be whisked away into the Stretching Room where things go awry. Don’t look up! 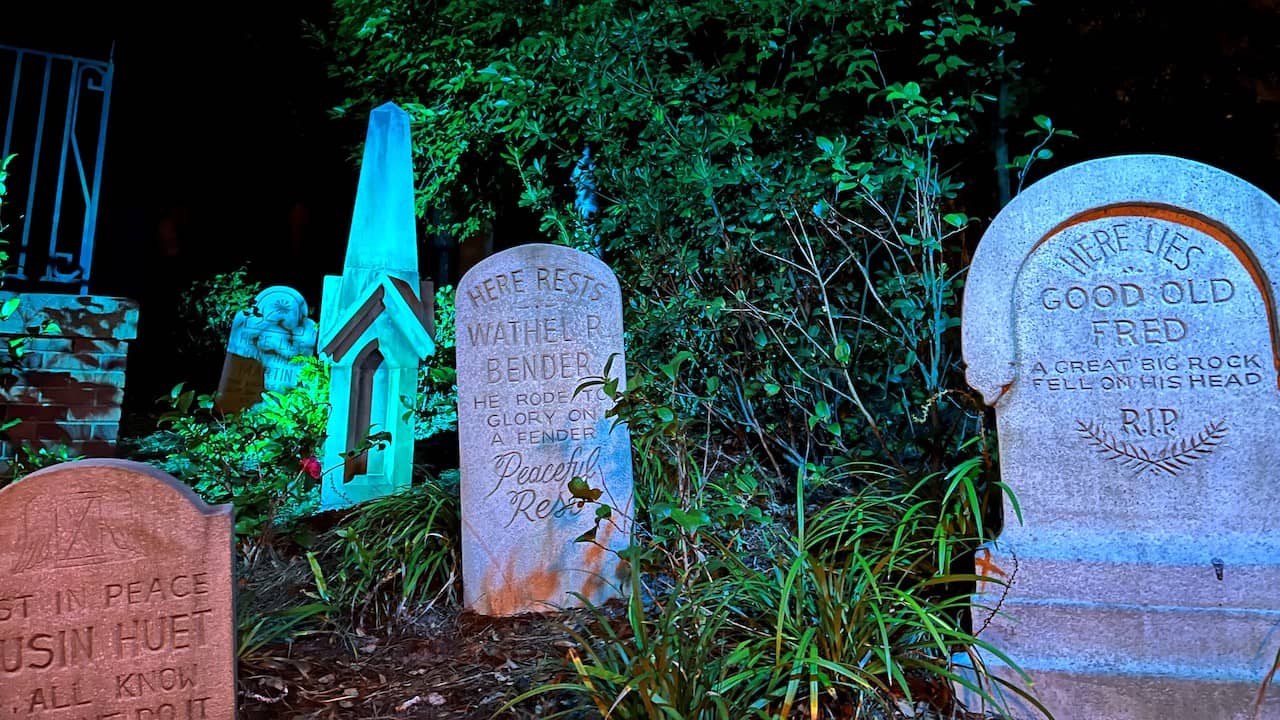 9. Big Thunder Mountain Railroad – To me, I like the old West theme and Big Thunder Mountain’s queue does a great job of recreating that. You travel up the mountain then down into the depths of “Wildest Ride in the Wilderness,” an old, abandoned mining facility. Multiple interactive elements were placed several years back throughout the queue, from cranks to turn and images to view to even pressing down on a plunger to blow up dynamite, which is sure to please anyone. 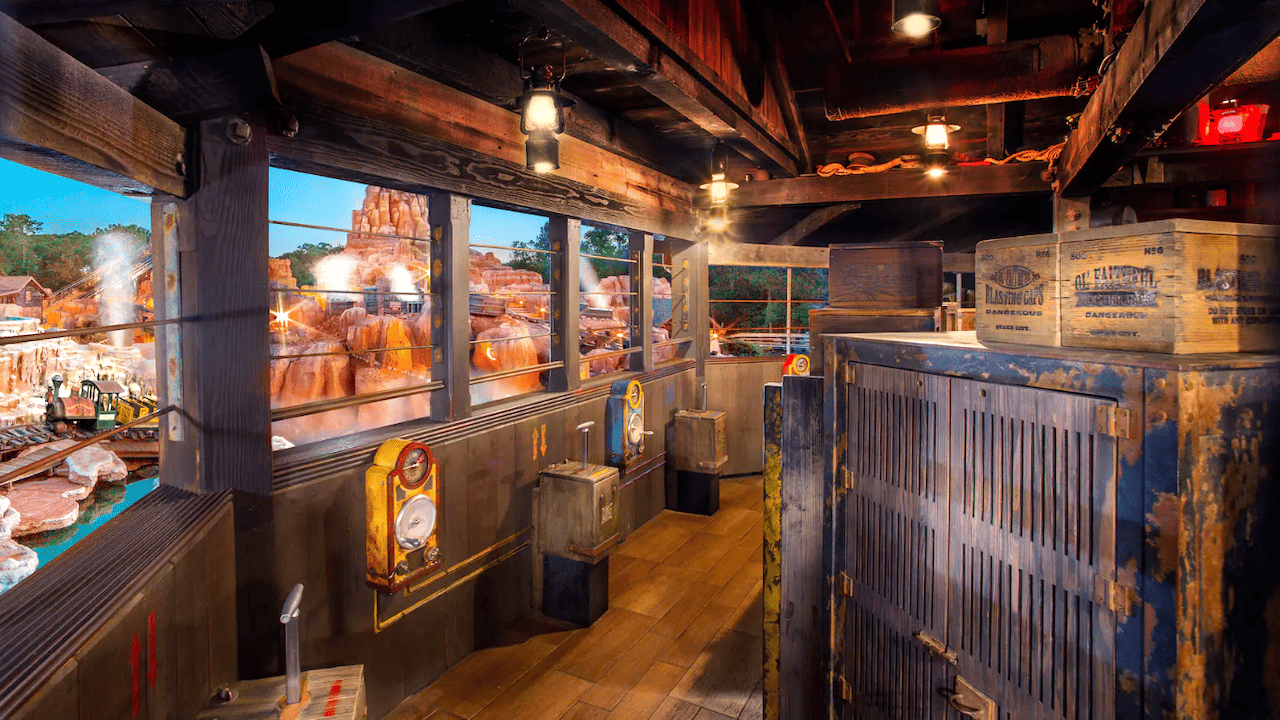 8. Expedition Everest: Legend of the Forbidden Mountain - This is like the Jungle Cruise queue, but on a different level. You go through the Himalayan Escapes Tours and Travel Agency to a converted tea warehouse that’s now a base camp filled genuine items from Nepal. Then you’ll learn about the Yeti... until you reach the Anandapur Rail Service, who can get you a one-way ticket to see the scary snow monster. 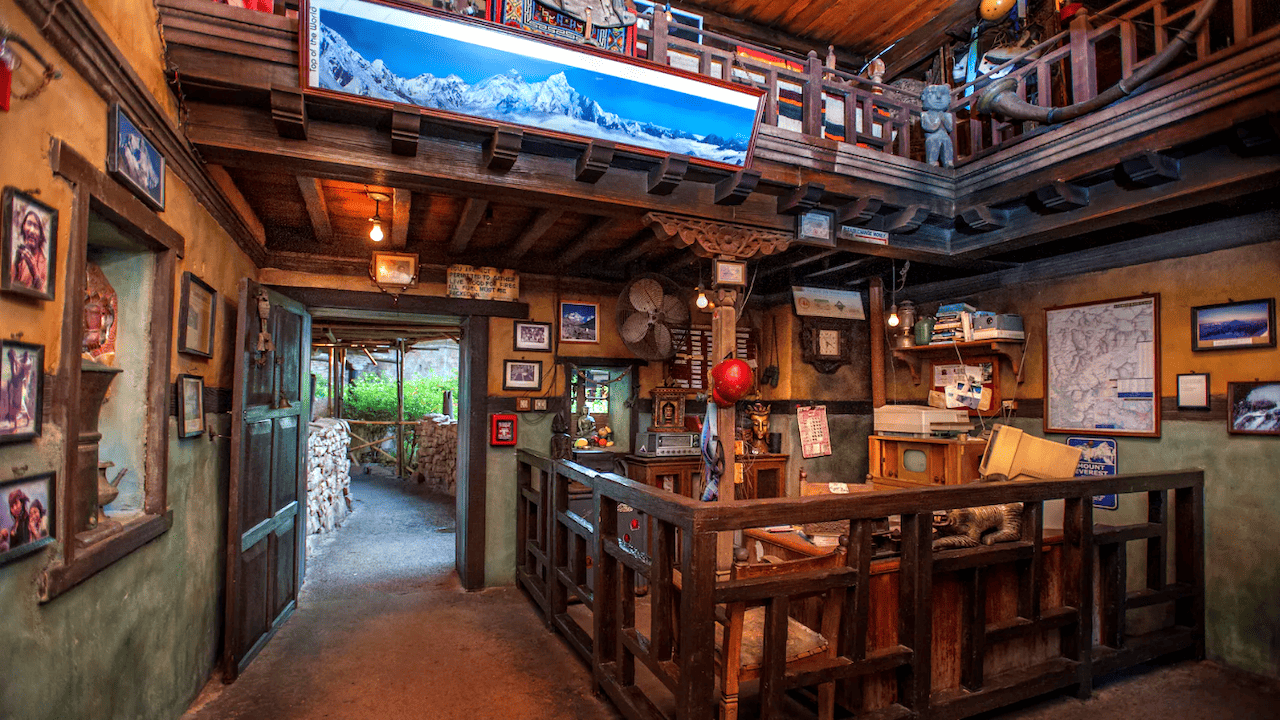 7. Millennium Falcon: Smuggler’s Run - I’m a big Star Wars fan and just seeing a life-sized Millennium Falcon is an excellent way to start a queue. After circling around the big ship, you’ll walk into a large mechanic's bay filled with spaceship parts and props from all the Star Wars movies. Then, you’ll meet Ohnaka who will give you a short briefing. Lastly, before you command the Falcon, you get to step inside famous lounge equipped with a Sabrac table (though unplayable, it still is delightful). It’s such an awesome experience. By the way, throughout the line you can scan QR codes hidden around the queue for use in the Play Disney Parks app.

6. Seven Dwarfs Mine Train – The Seven Dwarfs Mine Train is an excellent queue, bringing several interactive elements for all ages. We have jewel sorting and washing games. We also have barrels full of jewels that you can spin to reveal images and if you spin enough of them at once, a new image appears. A short ride with a usually long queue, the games help the time pass. 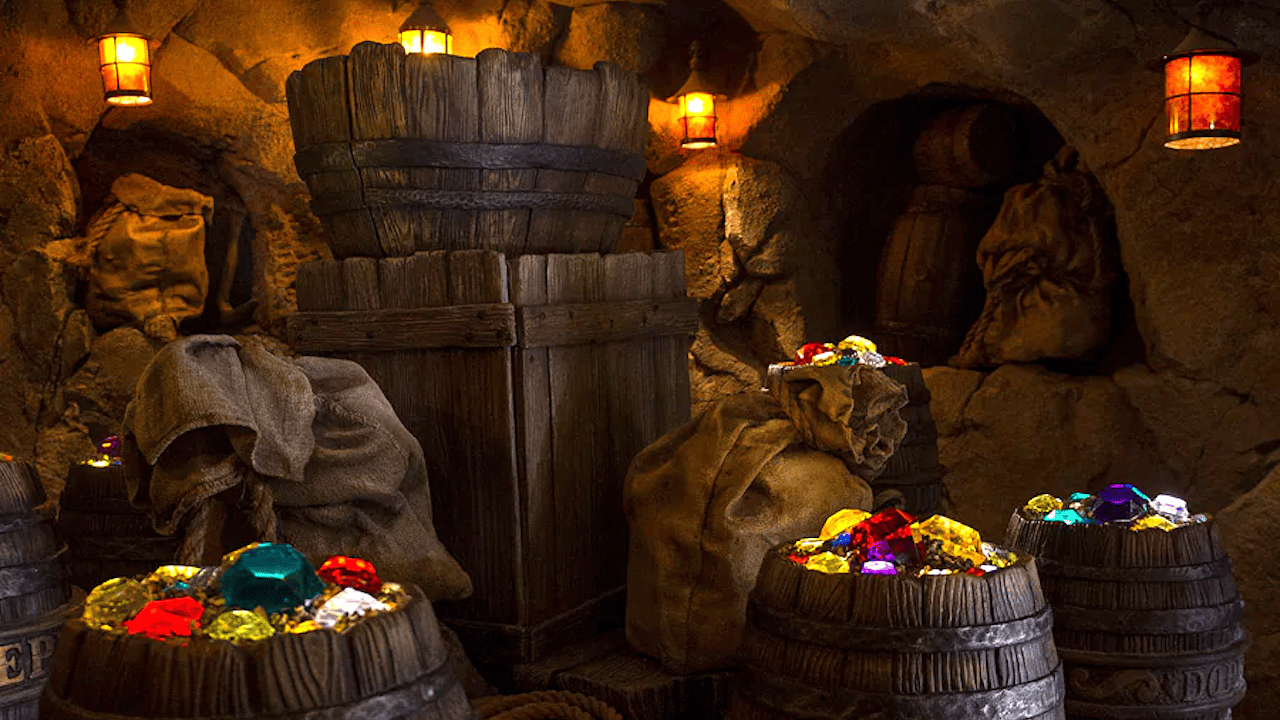 5. Guardians of the Galaxy: Cosmic Rewind - I have always enjoyed the Guardians of the Galaxy movies, and this queue manages to capture their out-of-this-world fun. The queue starts with a planetarium-like feel with planets and stars moving on the ceiling. Go through the line to see a miniature model of the city surrounding the spaceport on the planet Xandar. Then you get to see all the characters from the movies make their comical appearance along with a pre-ride show.

4. Peter Pan's Flight – Several years ago Disney decided to upgrade the line queue and it worked. Inside, you’ll find yourself making your way through the rooms of the Darling family. New features were added such as projecting people’s silhouettes on the wall so butterflies can land on them, play with dangling bells, don different costumes including Hook and more. Also, there is an area where you can release Tinker Bell to shoot across the room. It’s enjoyable to interact and be a part of the line. 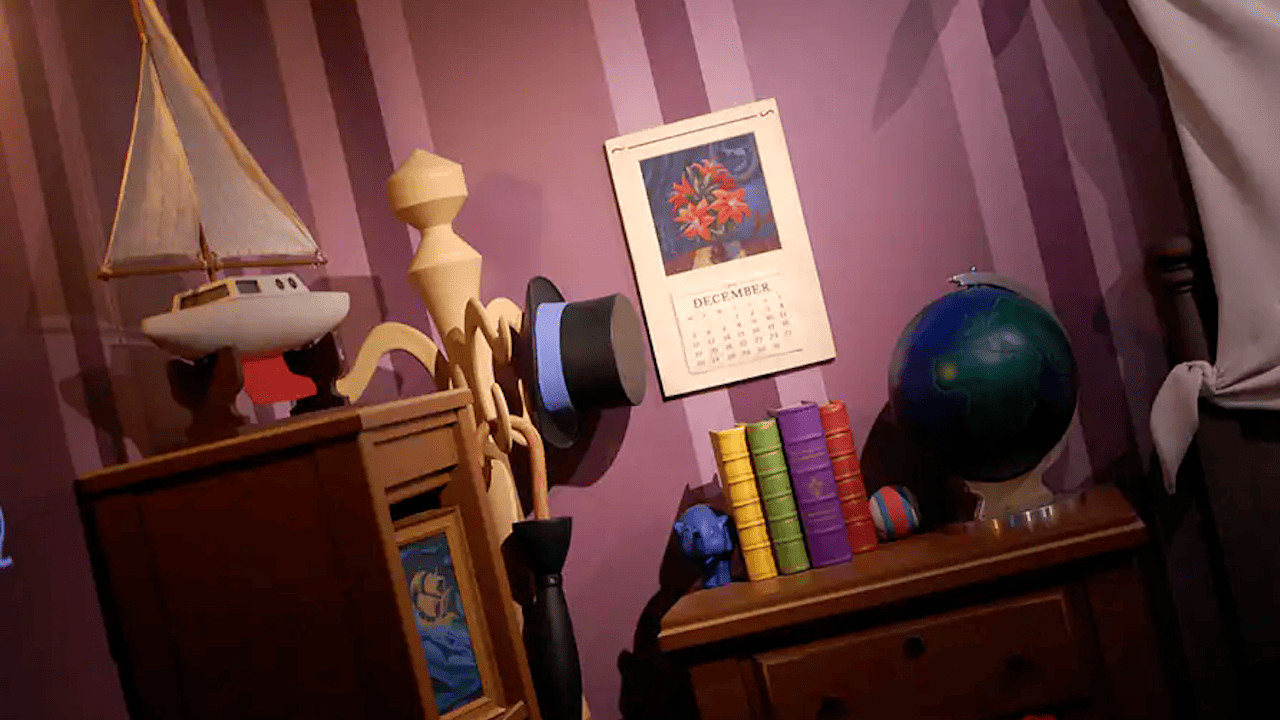 3. Avatar Flight of Passage – Disney really stepped up their queue game with this one. From seeing the bioluminescent plants surrounding you as you enter the Pandora Conservation Initiative base, you feel like you are in a whole new land. Seeing its starring character, Jake, floating around in the lab’s glass tank, is wild sight to see. It’s a queue not to be missed. By the way, I think the entering Pandora should count as part of the queue too. 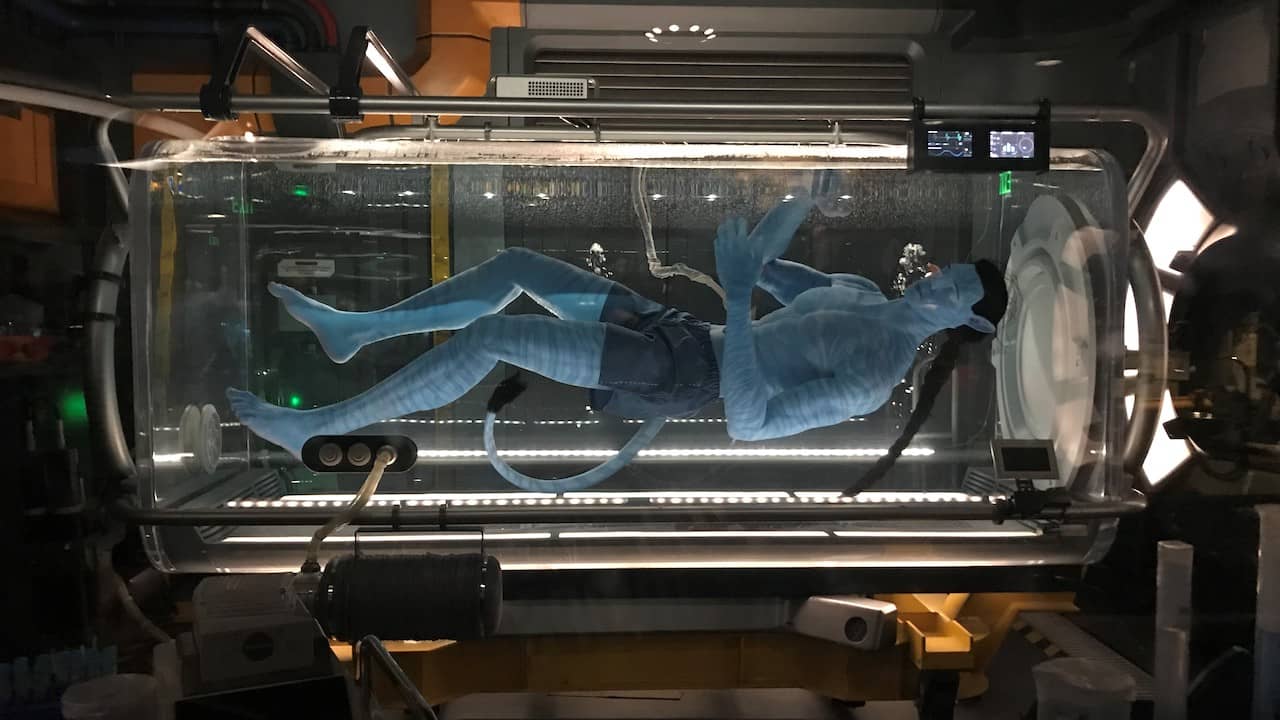 2. The Twilight Zone Tower of Terror - Call me crazy, but I find the queue cooler than the actual ride. Experiencing the Twilight Zone as you go through the haunted hotel looking for the guests that disappeared one fateful night is frightful fun. Look around and you can find many Easter eggs from the original Twilight Zone television show, like the To Serve Man Cookbook, the ventriloquist’s dummy and so much more. FYI, you don’t have to ride the ride to enjoy the queue, you can leave before going on the elevator of doom, just like with many of the rides here. 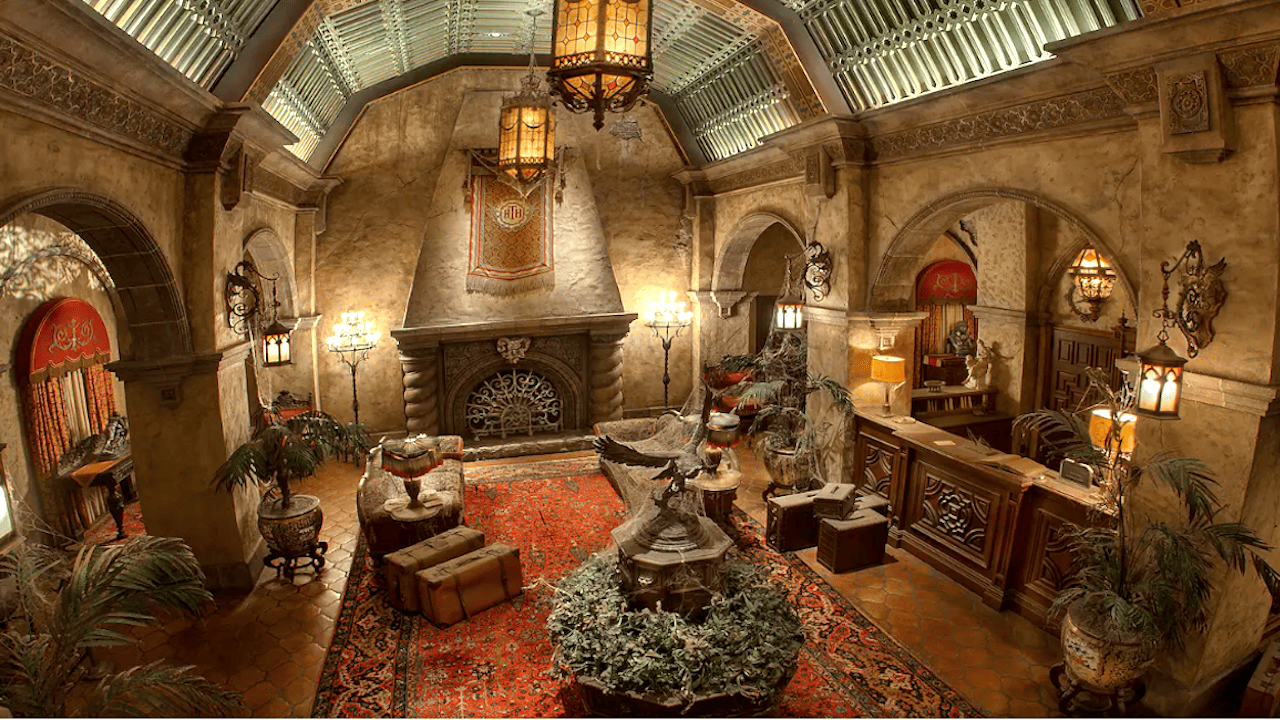 1. Star Wars: Rise of the Resistance - A ride that is part of the queue? Call it what you want, but besides riding the transport ship halfway through to the main attraction, the other elements of the queue are still downright fun. It’s my favorite themed queue in all of Walt Disney World because you feel you are part of the story. From entering the cavernous hidden rebel base to later being caught by the First Order with dozens of storm troopers awaiting your arrival, the entertainment never stops. Lastly, you’re interrogated by live First Order cast members in an amusing sort of way. An all-around fun experience which is why it tops out as number one on my list.

I agree with the Twilight Zone. The queue is actually really cool. During the summer hours, they have mist to cool you off too. Which adds an extra layer of “creepiness,” lol. I love the pre-show movie too. As well as right before you get on the ride, waiting outside the elevators.

Cool list! No ones lists will ever be the same but your choices, especially the top 5 are hard to argue against. In my eyes the Space Mountain queue is a gem. Its got that retro-future vibe which I like. Plus its mostly indoors. When that Florida heat is upon you that is a win! Runaway Railway has a neat preshow and I dig the museum-like environment, and its AC, from Dinosaur. I would include those 3 in mine minus the mostly outdoor, Big thunder and seven dwarfs, and well I haven't experienced Guardians yet.

P.S. although not worthy of a top 10 spot due to being a small part of their respective queue I enjoy the back alley grittiness of the RnRC loading area and the rooftops of Paris in Remy's.

I agree Space Mountain is a good one adding to the sci-fi thrill and am old enough to remember they'd have images of the trains in the starfields.

I do think Star Tours still great with the robots talking back to you, maybe a bit less than the original but still a fun treat.

The AC factor is a good one for sure on those hot summer days. Space Mountain is definitely a cool queue.

I’d like to give a special shout out and also a moment of silence for The Great Movie Ride’s queue. I always loved seeing the vintage costumes once you got inside the theater portion of the queue and have a special fondness for the loop of classic movie trailers that played while you were waiting to board the tram.

I also still love to this day the winding tunnels through the fortress in Pirates of the Caribbean. The cell with the two skeletons playing chess was one of the first images seared in my young brain of that attraction. And it’s remained iconic ever since for me

Ackin, I did have the Mickey and Minnie’s Runaway Railway on my list because of The Great Movie Ride, but with them taking a lot of the memorabilia from it I had to take it off. Great mention for sure.

I love Pirates too, but even more during Mickey’s Not So Scary.

I love the touch on the skeletons playing chess that it's designed so the game can never truly be won.

And a soft spot for Rock n Roller Coaster through fake music company and then the "back alley" for the limo.

A shame that a lot of the physical interactive elements within Big Thunder Mountain, Space Mountain, and Seven Dwarfs Mine Train have been eliminated in favor of the Play Disney Parks app.

Great call on RnR. It’s a very effective transition to leave the recording studio and head right into the back alley.

This question is possibly better answered in another thread, but does anyone know the terms of the Aerosmith deal with this attraction and if/when DHS might be looking to retheme it?

I love haunted mansion, but I think part of that is the nostalgia of it all. I am so pumped to see the guardians, but it’ll be so hard to beat Rise. Such an awesome experience.

Great list, but you didn't mention the interactive queue at the back of the Haunted Mansion's facade.

As honorable mentions, both Toy Story Mania and Star
Tours have charming queus.

I think MFSR is a bit underrated here. IMHO, the detail in the holding/grouping area is unmatched in the industry. It sucks that guests can’t spend more time in this space, but it’s one of the detailed guest areas WDI has ever produced.

I think RotR cheats a bit since part of the queue is an actual ride system (transport to the star destroyer). I guess it’s similar to HM’s Stretch Room, but I feel that most guests consider that section part of the ride, and not the queue, so why should Rise be any different? If you only consider the Rise queue that ends at the Rey/BB-8 pre show, then there are quite a few attractions with better queues.

i absolutely love the guardians queue and it is now my new fave. they manage to capture a level of excitement and wonder as soon as you enter that doesn't end until you exit the building. bravo! biggest new disappointment is ratatouille. only the rooftop provides anything interesting (and it's well done) and the loading platform is cool but rest is very claustrophobic and obviously done on the cheap.

Texas Two-Step Through Dallas and San Antonio: Schlitterbahn and ZDT's