Hulk Debuts at Disneyland - But Is He Really Incredible?

September 22, 2022, 3:50 PM · As promised during the D23 Expo, the Incredible Hulk has made his meet-and-greet debut at Disney California Adventure's Avengers Campus.

The giant new figure appears to employ Walt Disney Imagineering's "Project Exo" technology, which provides an exoskeleton to support larger-than-life characters walking around the parks. Disneyland says that Hulk will appear in Avengers Campus only for a limited time, so this also appears to be a test of Disney's new tech rather than a permanent debut.

Guest reaction to Hulk's appearance will play an important role in determining the next steps for this project. And that is where a compromise that Disney made to get Hulk on stage may come into play. 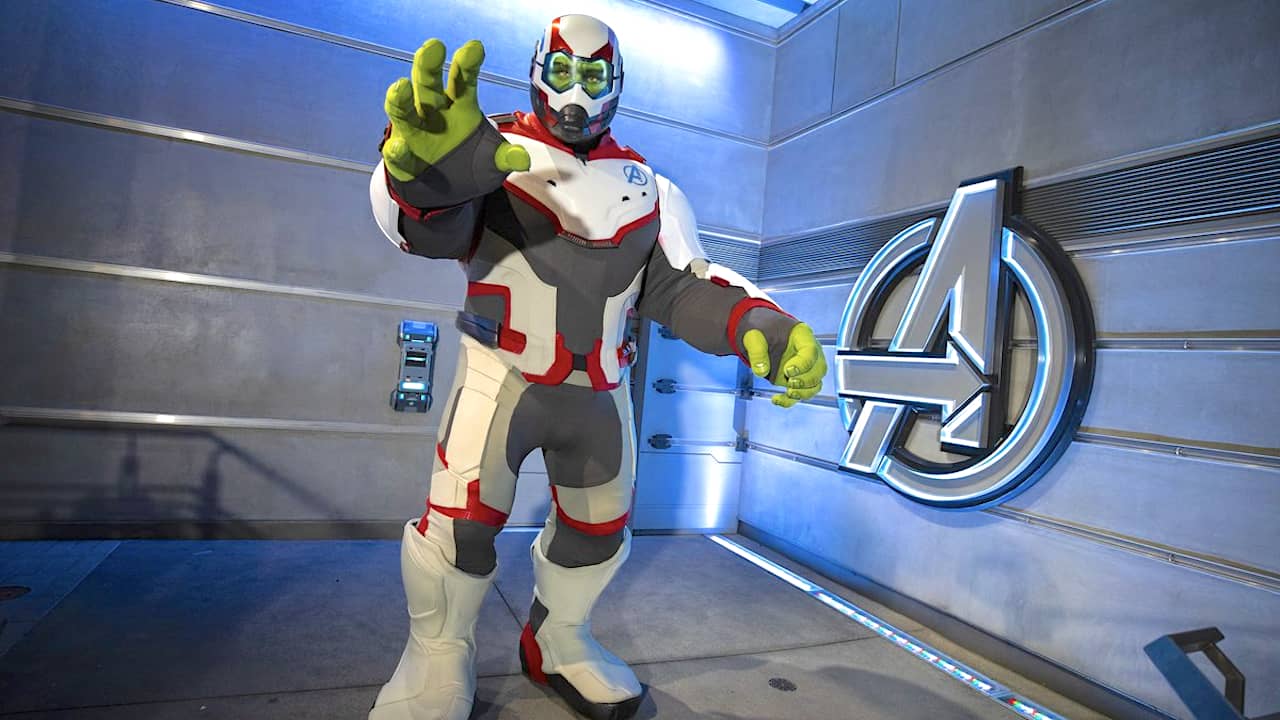 As you can see, Hulk is dressed in his Endgame time-traveling uniform, rather than appearing in his more familiar, shirtless form. This allows Disney to hide Hulk's face inside a helmet, where you cannot see if his lips are moving. Disney's Hulk character talks to guests visiting him in Avengers Campus, and the helmet costume allows Disney to not have to articulate Hulk's face and mouth, which it otherwise would have needed to do to make his speaking convincing.

Rival Universal has its own talking oversized theme park characters with Megatron and Optimus Prime from the Transformers franchise. But those are not humanoid characters like Hulk, so no one cares if they do not have fully articulated mouths and lips. And the Transformers characters in Universal's parks do not walk and move as much as Hulk does, so they do not require the same level of tech as Disney's Hulk suit does.

While Hulk's ability to move his legs and arms has the potential to impress, ultimately, he needs for his face and mouth to move just as impressively if this character is going to satisfy fans of Disney's super heroes. The talking Stormtroopers in Star Wars Galaxy's Edge can hide behind static masks because those are part of their characters. But Hulk's anguished expressions and "Smart Hulk"'s goofy looks and clever talk define this character as much his big green muscles do. So if I'm going out of my way to visit Hulk, I want to see his face.

I'm not going to knock something very clearly signaled as a technical test.

You highlighted the short comings I noticed in the various videos I've seen. These are valid things to work on for this new character costuming tech. If this was advertised as THE long-term Hulk meet-n-greet, then I'd be critical and questioning this roll out. But that's not what this is for and it's OK to not hit the mark.

I'd love to see more of these experiments happen at the parks in general.

Has there ever been a meet n greet Hulk at USO?

It's dumb, it's not the Hulk, it's a portly green guy in a Space 1999 suit. Just another example of Disney disrespecting their fans.

Because of his elbows not being able to bend, he looks like Ricky Bobby giving an interview on camera where he doesn’t know what to do with his hands.

For my money, the Transformers characters at Universal are far more convincing than this even though they lack the movement and articulation Disney has applied here.

My question is if Disney was so concerned with facial expressions with this technology, forcing them to put Hulk in his Endgame suit, why didn't they instead trial this technology with an Avatar Mech Suit? Using this in PtWoA would be the perfect application with the operator visible inside a mech suit that doesn't need all the cosmetic coverings they've used here on Hulk. I understand WDI trying to gauge the viability of this technology by using it on a popular character to get a better feel for guest reaction, but I feel that they would have been better served by putting their best foot forward and presenting the technology in an application closer to its native design.

I feel like Korg would have worked better than Hulk here.

"I feel like Korg would have worked better than Hulk here."

Or Baymax, which I assume will be a more permanent application of the technology once Pacific Wharf is transformed into San Fransokyo.

Also, considering the announcement that the new Avengers CAMPUS e-ticket will revolve around Thanos, the Snapping Titan would also be a more apt use of the Project EXO technology. But as we know, Disney keeps villains under wraps except for cameos during Halloween season for some unknown reason.

Maybe if those Ant-Man: Quantumnmania rumors are to be believed they could eventually use this for M***K

So here is your list of characters that fans would love to see tried next, WDI!

It's strange when you go from Muppet Mobile Lab (stunning) to Hulk (bad). Has some tallent left?