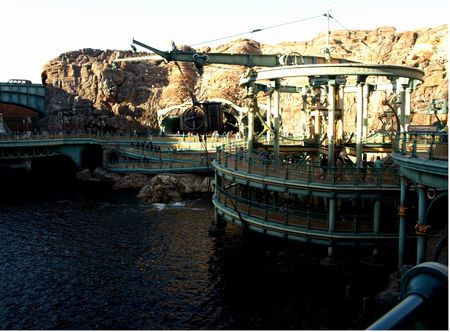 Tokyo DisneySea's 20,000 Leagues Under the Sea is not a clone of the submarine ride that ran for many years at Walt Disney World's Magic Kingdom. You'll find a duplicate of one of the old Nautilus ride vehicles moored in the lagoon at the center of Mysterious Island, but the ride itself is a dry dark ride that simulates an underwater adventure in a deep sea diving bell.

On board, you're sitting on one of three two-person benches inside the submersible, each with its own window. Using your joystick, you can control the lights that illuminate some of the mysteries awaiting your discovery in the deep. You're searching for the lost continent of Atlantis, and along the way, you will encounter a ship's graveyard in "Kraken Reef" and a surprise encounter in "Lucifer's Trench."

The ride is well themed and features an interesting twist on the standard dark ride, but is too similar visually to Journey.