An Inside Look at Universal's Revenge of the Mummy

Take a walk through the ride with its designer and see what Universal Studios Hollywood is building for its first indoor roller coaster attraction.

USH's Mummy will bow on June 25, as work continues inside the ride synchronizing show elements and outside crews apply the ride's Egyptian tomb theme to the exterior of the former E.T. ride soundstage on Universal's lower lot.

Murdy met me outside what will be the queue's entrance, as workers sprayed primer on the building's walls. Revenge of the Mummy will offer three queues, with a disabled queue and a single-rider queue in addition to the main one. In a departure for Universal Studios Hollywood, the queues will be fully themed, bringing visitors inside Imhotep's tomb before they board the ride.

“The idea is that you've entered the tomb just after it has been desecrated by robbers,” Murdy explained. “And if you've seen [Steven Sommers' Mummy] films, you know that if you trespass in the tomb -- bad things happen.”

Visitors will find the first of these “bad things” in the queue itself, where designers have hidden several interactive gags, to be triggered when visitors touch or reach through parts of the queue's walls. A hint: keep your hands to yourself if you've got a thing against bugs.

The three queues will merge in a Chamber of Curses preshow area, where a rear projection screen will be used to explain the attraction's back story. It is a time of darkness in the Mummy's world, with an imminent solar eclipse that will empower the Mummy to the claim the souls of those who violate his tomb.

Like all new attractions, Mummy will offer captioning for the hearing impaired. But rather than compromise the show with television monitors in the highly themed chamber, Murdy said the captions will be projected onto the walls, in hieroglyphs that melt into English. (And Universal's taken an extra step for parents, too, offering a private kids' play room just beyond the queue, where toddlers and their parents can wait out child swaps without having to endure the creepiness of the ride's unload area.) 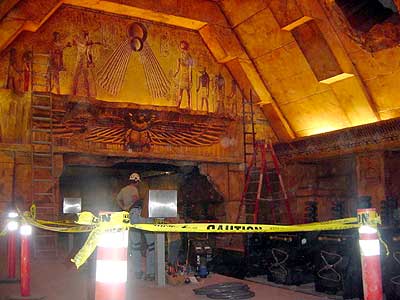 The loading station at USH's Revenge of the Mummy.

The single loading station lies a few steps beyond the Chamber of Curses. Here, as they board, riders will see the eclipse's beginning through a hole in the tomb's ceiling. Mummy's cars seat four riders abreast in four rows. Each seat features on-board speakers, playing a custom score written by noted Hollywood composer Alan Silvestri. 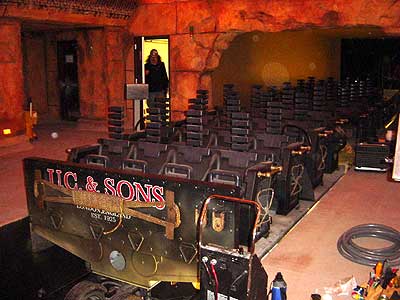 “The vehicles weigh themselves the the loading station, so they know whether they have a car full of football players or day campers,” Murdy said. “It compensates for the weight of the vehicle throughout the ride.”

The ride starts slowly, at a typical dark ride speed of three to four feet per second. Riders pass underneath a scarab swarm as they depart the station, followed by the Mummy's appearance on the left side of the car. The last surviving tomb robber approaches on a digital screen above the track, warning riders to flee. As if. Then the car proceeds to reveal the remains of the grave robbing party – skeletal remnants lining the walls and pouncing at riders from the ceiling. 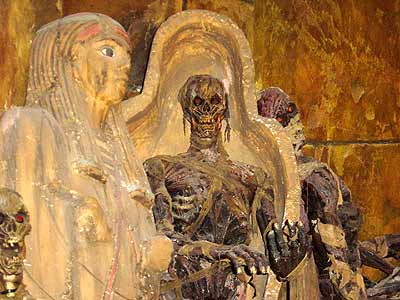 Just a few of the skeletal remains in Revenge of the Mummy.

Beyond the robbers lies another darkened chamber, where Imhotep will unveil a room of treasure. Trivia buffs will want to note that the treasure scene includes several original props from “The Mummy Returns” and “The Scorpion King.” 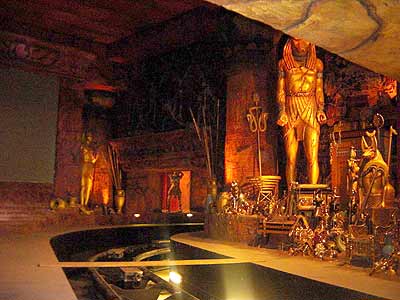 The treasure room. The darkened screen to the left will feature the show animation in this scene.

Of course, being a theme park attraction, something must go terribly wrong, and here Imhotep shifts into a Tarantino vision of Monty Hall, darkening the treasure and shifting the spotlight to the decaying remains of previous visitors who tried to make off with his loot.

Doors number two and three are not an option as the cars move into the next chamber, where an animatronic Imhotep greet riders with further admonitions and forecasts of doom. Gee, is it too late to chicken out and take home the year's supply of Rice-A-Roni as a parting gift? 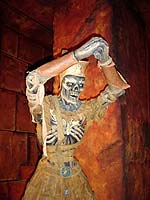 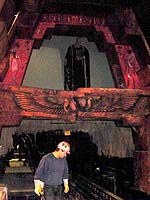 The Skeleton Warrior, left, and the animatronic Imhotep, in front of a darkened screem and above the ride track.

As we entered this chamber, Murdy stopped to show off a newly delivered animatronic Skeleton Warrior, one of two that will drop from the ceiling, in free fall, toward riders. Magnetic brakes will stop the warriors inches from riders' heads at the precise moment linear induction motors underneath the cars launch them into the coaster section of the ride.

The Premier coaster runs across 1,800 feet of track, launching into a banked left turn and drop. Special panel effects within the coaster segment will use a combination of black light and strobes to create an heighten the sense of motion with a series of unsettling double images above the track.

“We all love indoor roller coasters, but did you ever see a commercial for one when you were a kid, and think 'Wow, I've gotta go on that,'” Murdy asked. “But when you got there, you realized you hey, it's not all that dark. You could see the track.

“From the beginning, throughout the ride, we wanted to make this as dark as dark can be.” 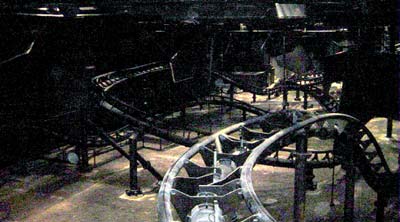 The Revenge of the Mummy coaster track viewed from the scarab invasion scene, looking back into the ride.

In the middle of the coaster section, riders run up a hill and into a full stop, where scarabs will emerge from the walls of the Mummy's tomb, enveloping all surfaces around the car while droplets spritz rider's heads. While that's happening, a track switch is shifting behind riders, preparing them for another launch, backwards, into the final segment of the ride.

Despite all the focus on fear within Mummy, Universal did consciously design the ride to be family friendly. There are no inversions on Mummy's track, as Murdy said the company's research showed that even a single inversion would dramatically reduce the number of visitors willing to ride.

“The number thing (we wanted to do) is to take everything we love about dark rides and then combine that with a roller coaster,” Murdy said. “We all love indoor roller coasters, but you never get the level or detail of the show that you will get here.”

The final scene brings riders face-to-face with Imhotep again. But just before the demon can suck the souls from their bodies, the eclipse breaks, and Imhotep explodes into a ball of flame, engulfing the car.

It's “Faux Fire,” Murdy explained, an effect accomplished with the use of pressurized steam and special lighting. The ride vehicle will rotate on a platform in the direction of the flame effect, bringing the car back into the loading station.

Murdy confirmed that USH's version of Mummy will offer a different experience from the Orlando version of the ride.

“There are certain scenes that are unique to each ride, and even the ones that are the same are treated somewhat differently,” Murdy said. “While the idea's the same, they are very unique rides in terms of show.”

Fans will have to wait until June 25 to see if Revenge of the Mummy fulfills Murdy's vision. But Murdy declined to take a shot at Universal's competition to the south when asked why riders should favor waiting a month to buy a ticket to ride Mummy over dropping the cash to ride Disney's recently opened Tower of Terror.

“Everyone seems to be stepping up to the plate this summer, which is great,” Murdy replied. “I know that theme park fans, the people who really love this stuff, like the folks on Theme Park Insider, have been asking 'when is somebody finally going to do something cool?' Well, we're doing it right now.

“To have so many new attractions opening this summer is going to be good for the fans, and it will be really good for the future of themed entertainment.”

“What I think we can do differently” than Disney, he continued, “is we can push things to the edge and beyond. We can be scary and we can freak you out. And that's really fun.”

For more information on and videos of Revenge of the Mummy, visit Universal's official site at http://www.revengeofthemummy.com.

Coming next: A look at Legoland California's newest, the Fun Town Fire Academy.

From Robert Niles on May 20, 2004 at 10:34 AM
I'll try not to analyze the ride too much -- I'll leave that for the review, plus it's not fair to draw final conclusions about a ride until it is finished. But I do find it interesting that the basic structure of this ride is essentially the same as the Dragon ride at Legoland California. Start on a roller coaster car in an ancient building, glide through a dark ride section, then move into a roller coaster section.

Of course, RotM will employ far more sophisticated thrills, technology and effects than Dragon. And RotM appears to avoid Dragon's greatest flaw -- a lack of music. But I note the similarities to help parents who are looking for a "junior version" of Mummy to try on their young thrill riders.

From Robert Niles on May 21, 2004 at 9:38 AM
Joe Lane has posted his review of the newly opened Revenge of the Mummy at Universal Studios Florida in Orlando. It highlights some of the differences between these two attractions.
From Matt Rogers on May 30, 2004 at 4:12 PM
Nice report!
From Steve O on June 17, 2004 at 8:05 AM
Contrary to what was said in the main text, the ride vehicles are NOT weighed at load (or at any other point during the ride, for that matter). However, The vehicles are timed as they progress through the main LIM launch (using the same proxies that sequence the LIMs) which determines vehicle speed (heavier cars will exit the launch at a lower speed). This vehicle speed data is used to adjust the timing of the blacklight and strobe effects in the high speed area.
From Robert Niles on June 19, 2004 at 4:28 PM
I was just going with what John Murdy told me, but frankly, I'd wished I had a chance to ask a follow-up question, because that didn't make a great deal of sense to me. The approach you describe sounds more feasible... at least from my limited experience in attraction design. Thanks for the clarification.
From Justin Cornwall on November 22, 2004 at 4:46 PM
This ride is FANTASTC.
I've been on this ride once (so far) and I was riding in the front row. I have a question about the "Anamatronic" Imhotep, is he supposed to move? He just stood with his arms outeached and never moved. Do you know what he is supposed to do? Oh, The Mirror you see above the dead grave-robber while waiting in line; is that supposed to do anything? Im sure this things are supposed to do some cool stuff, but the ride was closed half the day because of technical problems. That is probably the reason these things did not do what they were supposed to do. But just wondering if you could shed any light on this topic.
From Robert Niles on November 28, 2004 at 7:25 PM
Yep, you missed out. The Imhotep's supposed to gesture quite a bit.