Okay, okay, I know Disneyland finally got around to announcing it will add a new ride, fireworks show and parade for its 50th anniversary next year. But Legoland California, down the road an hour in Carlsbad, is also celebrating a birthday, turning five this spring. And the park is trying to out-do its larger, older rival by debuting five new attractions for its anniversary.

The latest of these, the Fun Town Fire Academy, opened this morning for a gathering of invited guests. Let's back up for a moment, first. Only two of Legoland's new attractions can be considered rides. Two others are walkthrough exhibits of Lego constructions and the fifth is a fake dinosaur dig in the dirt, where parents have to pony up $3 to rent a shovel and bucket. But Legoland's never aspired to offer blockbuster attractions like the Disneylands of the world. This park aims to create fun, often interactive, play experiences for kids and occasionally their parents. And Legoland succeeds again with its newest attraction.

The Fun Town Fire Academy defies conventional theme park categories. It's not a dark ride, a playground or a show. Perhaps my six-year-old daughter best categorized it when she declared, "it's like a challenge on 'Survivor'."

Up to four people work together as a team to power a rather large fire engine down a track, where a "burning" building awaits. Four teams are competing to see which can get to the fire, put it out by soaking a target with water, then get back to the starting line first. To move the fire engines, at least two people must pump a handle, like an old rail car, while one person holds a joystick down in the direction the car is supposed to go. And when the team gets to the "fire" (a false-front building with painted flame targets in the window), two people must work another pump to crank out water, while the other two aim the streams at their target. Then everyone rushes back into the engine to pump it back to the starting line.

All the challenge lacked was Jeff Probst off to the side, barking "Survivors... go!"

Here's a hint: do not be the only person over age six in your car, unless you really, really want to feel the burn. And I'm not talking about the fake fire. Moving these cars takes work. But guess what? Kids really like getting exhausted. The littlest ones can "steer" the truck and aim the hoses while the bigger kids (or adults) do the pumping work. (Children must be at least 34 inches tall to participate.) And everyone gets to run around, piling out of and into the truck at the fire scene.

Despite the best efforts of me, my daughter and three-year-old son, the Niles Tribe finished third in our initial challenge. (At least we didn't finish last!) And the kids begged to go again. Which, ultimately, marks any successful attraction.

Now indulge me a momentary tangent. Why on Earth doesn't Viacom (owner of Paramount Parka and Survivor's CBS television network) take a lesson from Legoland and develop a *real* Survivor challenge into an attraction at one of its theme parks? Universal showed with Men in Black: Alien Attack that an attraction built around an interactive competition creates a unique experience for each visitor on every visit, making people want to ride again and again and again. Survivor is one of the hottest entertainment properties in America now -- wouldn't a Survivor challenge attraction break the turnstiles at a Paramount park?

Okay, back to Legoland. The park also unveiled today a new edition of its Big Test firefighters' show, featuring a bumbling troupe of recruits who discover how to work together to learn some fire safety rules, overcome their fears and make the most of a second chance to become certified Fun Town firefighters. 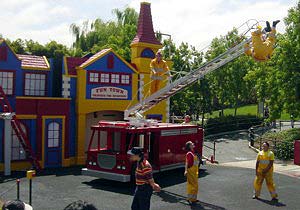 It's a charming little show, filled with slapstick and tumbling. You could easily miss it, but won't regret sitting down for a performance, either.

The Fun Town Fire Academy and the Big Test show will open to the public May 25.

From Philip Curds on May 23, 2004 at 10:13 AM
Innovative idea, Legoland California, yet I doubt Legoland Windsor in the UK would need water to cool us down on those 'hot' days.