Words like “unique,” “original” and “innovative” weigh little to publicists and ad writers. Slap a new shade of paint on a familiar carnival ride and they throw the words “fresh” and “exciting” around press releases with no more effort than reflex.

Such carelessness with the language leaves thoughtful writers with few effective superlatives when a park debuts an attraction that really *is* unlike anything ever ridden before. This challenge confronts Legoland California as it unveils Knights' Tournament, the first Kuka Robot “Robocoaster” attraction in the United States. (The official, public opening comes May 26, 2005.)

How does one describe this attraction? You can't accurately call it a roller coaster. There are no wheels to roll, and the machine never coasts. Here, you ride in one of a pair of seats attached to the end of a factory assembly-line robot arm, pitching and yawing through the air. No tracks. No cars. No wheels.

Kuka's pitched the name “robocoaster,” but in its debut installation that unfamiliar title means nothing to casual fans and visitors. So let's try this instead: The future of theme parks.

Every decade or so, a theme park company introduces new technology that everyone in the industry rushes to copy: Steel-track coasters, Audio-Animatronics, upside-down coasters, flight simulators. Add robots arms to that list. With Knights' Tournament, Legoland has its first break-out hit, an attraction that will draw fans outside its target market of families with pre-teen children. 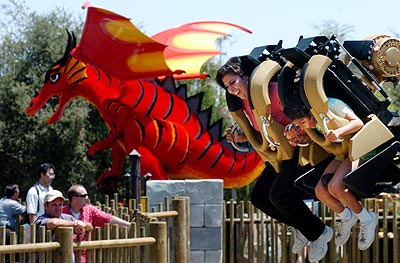 Photo courtesy Legoland California.
The genius of Knights' Tournament lies in its interactivity. Riders can select the intensity of their adventure, from a gently lifting level one to a popcorn-kernel-in-a-skillet-of-hot-oil level five. Riders from 40 to 48 inches tall are limited to level one, those under 55 inches to levels one or two. Neither invert; you'll need to selects level three or above to go heels over head.

But a four-year-old can now ride the same extreme coaster as his older teen sister. And with the flexibility of computer control, Legoland can introduce newly programmed ride sequences until Kingdom Come. Look for new sequences by this time next year, with the possibility of random sequences (within your selected intensity level, of course) in the years after that.

Level four offers an experience most like an extreme roller coaster, with broad swoops, inversions and flips during the one-minute ride. But Knights' Tournament is no mere simulator. When was the last time a mere roller coaster froze you upside down in mid-air? Or cartwheeled you in a 360-degree spin around your belly button?

A tip for the queasy: Extend your legs and watch your feet while you ride. With no track, you've no visual clue of what's coming next. Watching your feet provides a steady point of reference to help your eyes maintain your sense of equilibrium during the ride.

My favorite move, on level four, dropped me face-first toward the water below, only to then flip me heels over head backward above the robot arm mount into a complete inversion on the other side. (Guys, ignore the advice above and hold your legs in, sitting tight into the seat for this flip. I'm just sayin'. And in a really high voice....)

Level five sacrifices some sweeps and flips for more lateral spins and cartwheels. At its more intense levels, Knights' Tournament is the ride that Magic Mountain wished X would be. But thrill junkies will find any of the levels two through five satisfying, each for its distinct features. And the kindergarten crowd will delight in level one's simple thrill of a slow spin in the air on a “big kids'” ride.

Knights' Tournament continues a tradition of interactive attractions that has distinguished the Carlsbad, Calif. park in its six years' of business.

“Lego's values are all about that you are able to decide and influence your own experience,” Legoland President John Jakobsen told Theme Park Insider. “You can determine what you want to do. You're not just being put into something and passively entertained. Here, you have to make an active decision.”

Jakobsen explained that the flexibility of interactive attractions such as Knights Tournament and last year's Fun Town Fire Academy is essential for the park to serve its target pre-teens without making its attractions seem like toddler fare.

“The challenge is how can you have something that is appealing for eight, nine and 10-year-olds, without being laughed at by the 13 and 14-year olds? Because if that's the case, you've lost [the younger kids] all the way down the ranks.”

Lego toys are built to inspire tales of fancy and adventure, not to provide them. That's the key difference between Lego's core product and the movies and TV shows offered by other parks' parent companies, including Disney, Universal and Viacom. That difference is reflected in Legoland's attractions, which rarely impose explicit storylines on its creative settings. Yet the care and detail provided in those settings enable imagination, raising Legoland's rides far above the unthemed fare of amusement parks like Six Flags.

But a creative mind can imagine the spectacle a ride like this could become within an immersive story, supported by on-ride music and visual effects. Legoland's attractions lack the upper eight-figure budgets that Disney and Universal adventures enjoy. Yet the uniqueness of the experiences Legoland offers puts this park on the same level as its big-budget competition.

Too few theme park fans have made their way an hour south of Anaheim to witness the creativity and innovation at Legoland California. The park draws a little more than one-tenth the number of annual visitors as Anaheim's Disneyland Park. As millions more flock to the Magic Kingdom this 50th anniversary year to celebrate Disneyland's past, here's hoping Knights' Tournament draws a few of them down the road to Carlsbad, to celebrate the park whose innovation is driving the industry's future.

From Arthur Cashin on May 20, 2005 at 9:52 AM
I got to ride the one they have in Denmark and it truly is a unique experience. Not to be missed.
From Edward Bass on May 20, 2005 at 4:11 PM
Wow! That looks cool. If only I didn't live 2000 miles away and last year was our big vacation to Southern California!
From Kevin Baxter on May 21, 2005 at 5:04 AM
Fairly cool, but four people at one time? What's the throughput, 100 people per hour??? If I were Disney or Universal, I don't think I would be jumping on the bandwagon for a line-creator like that.

So how exactly would this be used in a dark ride, since Universal's scrapped Van Helsing was supposed to be our first introduction to the technology? The towers seem far too thick and bulky to be easily moved around a track. And could a car for, say, sixteen people fit on there and still create those motions? I can definitely imagine a challenger to Spider-Man if these needs are met, but I don't see them being them met with the Legoland examples.

From Russell Meyer on May 21, 2005 at 6:56 AM
Kuka had shown a version of the Robocoaster where the arms were mounted on a track, but it was still only four to a car. The ride itself looks cool, but the viability of it being used as an e-ticket I think may be a ways off.

I could see Six Flags picking something like this up and using it as an upsell attraction. They could probably get $10-$15 per ride.

From Robert Niles on May 21, 2005 at 8:52 PM
There are six arms, each with two seats. With a one-minute ride, that would yield an hourly capacity of 360, assuming another 60 seconds to unload and load passengers between rides. Given that riders have to choose their levels, I think a two-minute unload/load time is more likely. Which would yield 240 guests per hour. Yes, that's "Dumbo" territory. But it's actually a relatively high capacity for Legoland.
From Jason Lester on May 21, 2005 at 10:20 PM
Legoland's older coaster Spellbinder had serious line problems.

I'm thinking if the car size was increased a dark ride could be possible. Empahasis on the could be.