The NBC grossfest finds a new home at Universal's California park, and might just stick around a while.

Universal Studios Hollywood has scored a big hit with their newest attraction, Fear Factor—LIVE! (The exclamation point is part of the official name; so, No, I’m not yelling). I can honestly say I was prepared for a wimpy, theme-park safe show that paid homage to the NBC-Universal babe-fest of the same name, but didn’t actually stretch any limits itself. To my delight, I was very much surprised.

For those of you who’ve been under a rock for the past two years, Fear Factor is the sexy reality show on NBC (which, not coincidentally, now owns Universal) that puts beautiful bodies through tortuous physical challenges such as jumping from one moving truck to another, scaling skyscrapers and dangling underneath moving helicopters. The show is most notorious, though, for its weekly gross-out challenges of eating some of the most disgusting digestible (barely) products around—bull testicles, crunchy spiders and pig entrails. If you vomit, you lose (The theme park version is a bit more polite, though, and allows vomiting—buckets provided).

The way it works in the theme park is that guests who are interested in participating must register well ahead of time at a “casting office” near the Terminator attraction. And not everyone can participate: Certain physical limitations make sure that in-shape individuals are most likely to participate—not to mention the more athletic participants look better in the red and black skin tight outfits that volunteers must wear. It’s for “better show,” I would guess. Regardless, liability forms are completed and participants sign their life away for the chance to take part in some unique physical challenges, all in front of a live (up to nine times daily) studio audience.

Since this was the opening day, I’ll cut Universal some slack about the wait. But the “front of line” VIP guests had to wait in a sun-baked alley beside the auditorium nearly as long as everyone else. A few tarps would have gone a long way here, that’s for sure. During the wait, though, child volunteers were selected from the crowd for the pre-show mayhem inside. Four young visitors were taken onstage and made to eat candy-coated beetles—the audience could easily hear the crunching. Great stuff, and the one who swallowed all the bugs first won a Premium Annual Pass to the theme park…pretty cool.

Next up, we had to endure the first day of two over-eager rookie hosts who traded corny jokes and tried to get the crowd excited. In full disclosure, I must admit that I truly detest these “warm-up” acts. Not just here, but anywhere. For example, I groan every time I have to “ooo” or “aaaah” prior to the Indiana Jones Stunt Show. Get on with the show already. If you love this stuff, then have at it—but I digress.

The real fun began when the six contestants came out, fully geared up and dressed in Fear Factor tights, looking every bit as authentic as the television contestants. As they prepared for their first challenge, video clips introduced each of them, edgy music blaring, cool graphics and all. It was a pretty cool setup—that is, until something screwed up and the video cut off. At which point those over-eager hosts tried to fill the dead time. Have I mentioned how much I don’t like over-eager hosts trying to entertain an audience? I guess they are a necessary evil, though.

The first challenge involved standing on platforms high above the stage. As the platforms were released, the contestants had to hang on while stinky smoke rings were blown into their face by audience volunteers. Granted, the smoke rings were meant mainly as something to occupy time while the contestants hung, but watching each person hang and then drop was pretty exciting. A cable mounted on each player’s back kept them from crashing to the ground. The losers had to take the proverbial walk of shame through the big doors at the back, smoke, lights and music adding dramatic effect. Well done. 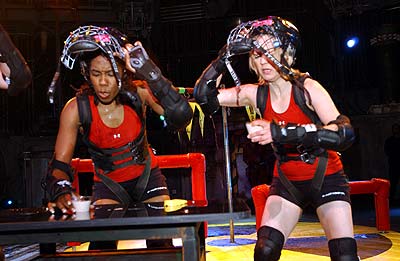 Image courtesy Universal Studios Hollywood.
The next challenge involved spinning to unlock their helmets from a locked position, grabbing things from a tank filled with eels and running onto a spinning platform. Wipeouts happened, but not as many as I’d like, sadist that I am. The gross-out challenge involved eating some nasty blender-made smoothies—they contained some type of rotten animal parts. No one puked, but buckets were on standby.

The last challenge had the two final contestants spinning a metal wheel that was electrified and supposedly painful to touch. Although the hosts went on and on about the level of electricity, we all know that only a safe amount would be used in such a situation. This challenge was the least exciting, although it is essential in the final special effects “blow up” that happens.

The winner didn’t really win anything more than the satisfaction of knowing he won. Seems odd. For all that effort, at least a burger at Mel’s would seem in place. The kid in the pre-show got an annual pass, for crying out loud, and all he did was eat beetles.

During a break, while the contestants readied for one of the challenges, a studio audience member was chosen to come up on stage for a truly fearful experience. A wheel was spun, and the arrow landed on scorpions. The audience member stuck her head into a tank and had scorpions dumped on her. For me, this was the single most unnerving—and engrossing—part of the whole show. Very cool.

I predict that this show will stay crowded for some time. It was a real crowd-pleaser the day I went. I hope that they are able to keep fresh challenges coming—the permanence of a stage kind of hampers new challenges each week, that’s for sure. But maybe they have multiple challenges that will be rotated.

There aren’t too many jobs quite as exciting and downright incredible as John Murdy’s—he’s the creative director for Universal Studios Hollywood Theme Park, which means he has his hand in planning all the new attractions and special events for the West Coast (and first) version of the Universal franchise. For those of you who just speak Disney, he’s Universal’s equivalent of head Imagineer. Or, as we like to call it, Imagineering with edge. Amazingly, he’s worked his way up the Universal ladder. In 1989, he started working as a tour guide. He then became a production assistant on the E.T. attraction. And now he calls the shots. This tour guide’s got game.

Perhaps the biggest misconception about this new Fear Factor Live attraction is that it’s “Fear Factor light”—which means Fear Factor defanged. Or, worse yet, Fear Factor Disney-fied. Murdy assures us that this is just not the case: “The real trick was in creating stunts that look dangerous, but are actually safe for our guests,” he says. “So, we worked with the producers of the television show, with professional stuntmen and we came up with awesome-looking, repeatable stunts.” By repeatable, he refers to the fact that the show has to be performed multiple times per day—up to nine times on busy Saturdays.

At 30 minutes per show, that’s quite a bit of action, and that doesn’t include the casting process. Contestants have to meet certain guidelines, include a minimum age of 18; a height of between 5 feet to 6 feet 2 inches; and a weight of between 100 and 225 pounds. The reason for the restrictions is due mainly to the harnesses and wires used to secure contestants during the show.

According to Murdy, the idea for the Fear Factor Live attraction originated about the same time as NBC decided to buy Universal. And the idea came from Murdy and his team, not NBC—although the network was ready and eager to use its broadcast assets in the theme park. “We started looking all over the NBC schedule for ideas,” says Murdy, “and Fear Factor was a no-brainer.” The time from inception to premier has been just over a year—proving that Universal is able to conceptualize and complete a project faster than most theme park companies can hold a committee meeting.

The creative teams from both Hollywood and Orlando worked together. But although both shows share the same theme, different venues and conditions required creating almost two completely separate shows. “In Orlando, they use the old Wild West venue, so they’re more outside,” says Murdy. “They use car challenges. In Hollywood, we’re in an indoor venue, which allowed us to be more theatrical. That’s how we were able to use the electricity effects.”

Okay, about that electricity stunt—are guests REALLY getting shocked? “Yes,” he says. “We’ve found a safe way to shock people. I was one of the original guinea pigs. I mean, that electric wheel hurts. I’ve watched from the audience as park guests participate, and it amazes me that some of them can hang on for so long. It must be the adrenaline.”

Now, what about those scorpions that you pour on someone’s head? “We have professional bug wranglers to handle our scorpions and the rest of our bugs,” says Murdy. “We use the emperor scorpions, which are the largest in the world, and they still have their stingers and pinchers.” Um…really? “It’s all in how you approach them,” he continues. “They can get aggressive. We put goggles on the person and a flap over their head. It’s safe.”

“You’re going to see more and more attractions like this,” says Murdy. “They’re interactive. People don’t just want to watch a show anymore—they want to be involved.” And what about those puke buckets onstage? “No one’s thrown up yet.”

When pressed about any future plans for Universal’s attractions, Murdy is pretty mum, although he does admit that major new attractions are already in the works for both 2006 and 2007. He can give us some clues as to some smaller happenings, though: The Special Effects show will see the addition of “Madagascar” on July 4th weekend, and the zombie effects from George Romero’s “Land of the Dead” soon thereafter. And, of course, this December guests should expect to see something fun to coincide with Peter Jackson’s remake of “King Kong.”

If Universal had this major King Kong movie coming out, why did they scrap Orlando’s Kongfrontation? “The decision to close Kong came before we knew about the new movie,” he says. “But King Kong is still on the backstage tour here in Hollywood. And we have the crashed plane from Steven Spielberg’s new ‘War of the Worlds’ too.” Spoken like a true tour guide.