After having been an Orlando resident for ten years, and a Walt Disney World annual pass holder for 4 of those years, I moved to Hong Kong two weeks ago and just got back from a day at Hong Kong Disneyland, which is now my new "home park".

Allow me to make a quick note about the jet lag. You will experience it if you're coming from the U.S. Imagine the sun coming up at midnight and going down again at 4am, and then landing at 8:30pm when your body thinks it's 8:30am. Give yourself at least one full day to recover before attempting to enjoy the park - or you likely won't enjoy it nearly as much.

I know HKDL is modeled after the Anaheim original, but my only experience to DLR was over ten years ago, so I'm comparing apples to oranges. Mandarin oranges, perhaps?

Bryan Wawzenek wrote up a great report last year, so I don't need to go into great detail, but it's very Disney, yet very different from Walt Disney World, which is my bread and butter. They don't have monorails here, but they do have the Hong Kong Disneyland rail line. 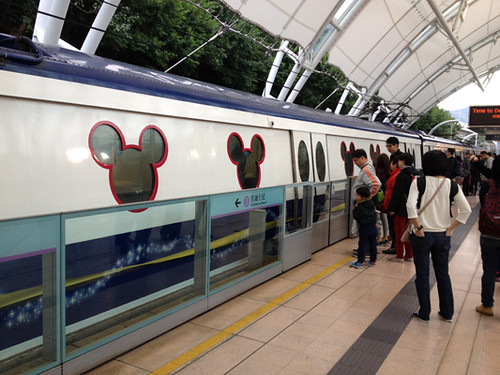 The train lets you off at what I can only describe as an ornate and beautiful landing area with escalators that take you up to a long palm-lined walkway. Really, HKDL did a fantastic job with making you feel all Disney giddy even before you enter the park. 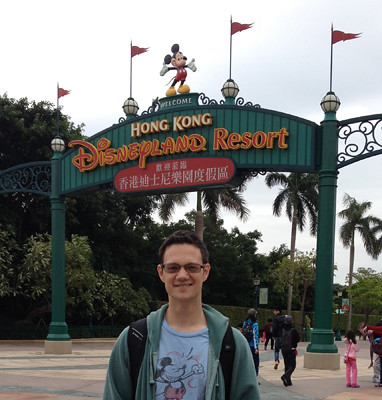 As an Orlando resident and AP'er, the WDW signage is burned into my brain, so when I see something so different, I'm in awe. It's so Disney! But it's so different! 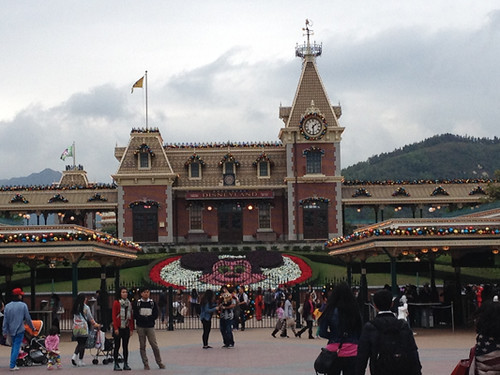 Like the train station that meets you at the front of the park.

The first thing I wanted to do when I got to the park was check out a store to see how much merchandise was "Disney Parks". Lo and behold, almost everything I looked at was HKDL-specific. Even generic looking t-shirts had Hong Kong Disneyland tags.

I was impress/relieved because I was a bit perturbed by all of the Disney Parks stuff at WDW. Sure, you can find Disney World-specific merchandise, but what about the other parks? I had heard Disney just mass produced the same stuff for every park, and I was worried that I'd be hard-pressed to find anything specific to this park. I was completely wrong. Everything was Hong Kong. 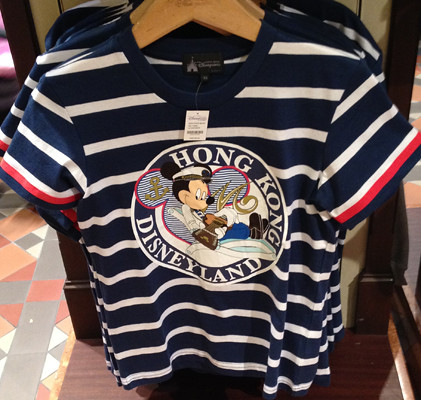 Upon nearing the castle, I took a left toward Adventureland. Very strange. That's really all I can say. There's no Tiki Room for starters. Bryan wrote a good review of the combo Jungle Cruise + Tom Sawyer's Island....it's very odd, and I skipped the whole area, save for the Festival of The Lion King. Wonderful show, and I wrote about it in the review section briefly. 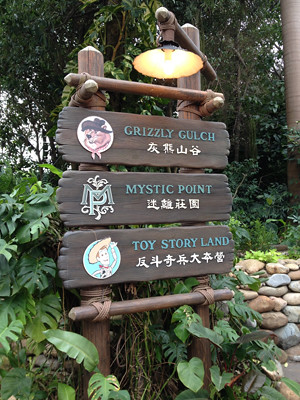 The Grizzly Mountain Runaway Mine Cars was also reviewed in the section about HKDL, but I really enjoyed it. Same with Mystic Manor, even moreso! In fact, Mystic Manor was mind-blowingly good!

Worried about long lines? Don't be. Mystic Manor and GMRMC were each around 5 minutes. The only long line in the entire park was for the Toy Soldier Parachutes, only because it's terribly inefficient.

Over on the right side of the castle was Fantasia Gardens, which was where the character Meet & Greets were. The lines were too long, and none of the characters were actually out, but it was really pretty, even though the day itself was not the greatest. 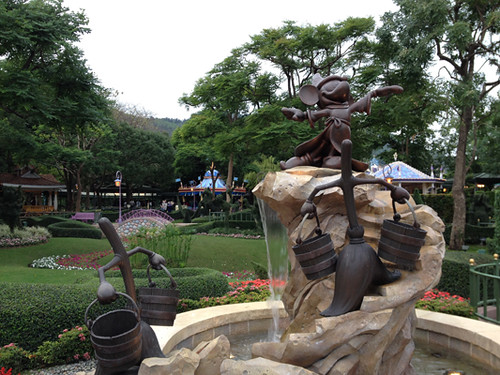 Each of the new sections was small - actually, that can be said about every section of the park. Fantasyland was tiny. Tomorrowland is tiny. The castle is tiny.

In fact, the thought that kept crossing my mind was "without these three new lands, this park is REALLY SMALL!!!!!!". Oh my goodness! I really can't imagine the park without the expansion. They make the park feel as big as Hollywood Studios, which is still about a half day of fun. And I believe there is still plenty of unused or underused space that can eventually lend itself to an expansion. Of course, with the recently added lands just completed, I don't necessarily foresee another expansion any time soon, though I am very excited for the Iron Man Experience in Tomorrowland. 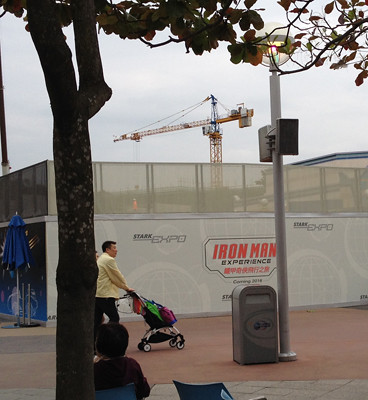 Overall, the park was a fun half-day treat. Before I went, I thought I'd get an annual pass, but now that I've been, I think it might be a twice per year type of experience.

Also, Main Street is small, and half of the left side (walking toward the castle) was under refurbishment. 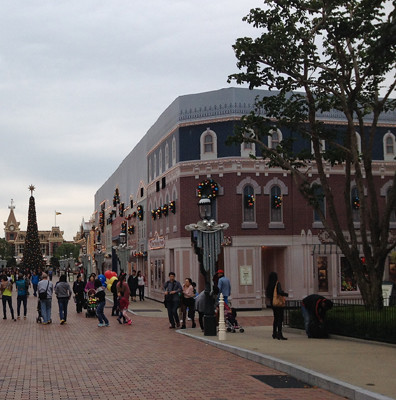 I don't know when the tarps will come down, but it was a bit of a downer, as it really ruined any photos you'd want to take from Main Street with the castle behind you.

Finally, I went on a Monday when it was unusually chilly (about 60 degrees), and it started sprinkling ever so slightly around 6:45, so the parade was canceled. That was disappointing. Perhaps the park is a bit more crowded on the weekends and/or in the Summer, but it was very easy to walk around and do all of the attractions. Compared to Magic Kingdom, it was a ghost town.

One more thought - Hong Kong is a crowded city, but I realized Disney World (Magic Kingdom and EPCOT during Food & Wine weekends) prepared me better than I could have imagined. If you can survive and be comfortable in those crowds, you'll be fine in Hong Kong.

Thanks for the report Gabriel! Great stuff, and please keep posting with anything new from future trips to Hong Kong Disneyland. This is the one Disney park in the world I have yet to visit, so I'm fascinated by it, of course, and can't enough information, photos, videos, etc. from it.

Great article. I'm hoping to get there next year. How was the language/communication barrier?
Thanks.

Thanks guys. It'll be a while before I go again, though I'm likely going to buy an annual pass. Hong Kong Disneyland feels very different, but it's still Disney, and it still feels like "home". I'll be sure to provide updates on not only the Iron Man Experience attraction, but also the third hotel they're building.

The language barrier was not a problem at all. All of the signs are in both Chinese and English, and though I didn't speak to many Cast Members, those who I did spoke English.

The Festival of the Lion King was performed in English, Mystic Manor was in English, announcements and instructions in ride queues were almost always given in Cantonese, Mandarin, and English, and restaurant menus are in both English and Chinese.

It feels very much like the Disneyland in Anaheim park. In fact, I half expected to see the Matterhorn, which isn't there.

The biggest difference is the Chinese food. You either like it or don't. I enjoyed the parades and shows, which is compensation for the lack of rides there.

Compared with the ginormous crowds in Hong Kong itself, Disneyland seems empty. That's what makes the park visit see more intimate. Frankly, something is missing with this transplanted park. They need more time for this park to stew because it is just off by a mile.

Definitely keep the reports coming, Gabriel, as I look forward to vicariously sharing in all your Hong Kong Disneyland adventures!