October 4, 2006, 1:47 PM · Halloween events are already under way at many theme parks and Universal Studios Hollywood today kicked off the PR blitz for its revived Halloween Horror Nights.

The conceit was "Zombie School," as USH employees gathered in front of the Bates Motel on the Universal back lot to show off their zombie impersonation skills for a collection of local TV camera crews and assorted webheads (including yours truly.) 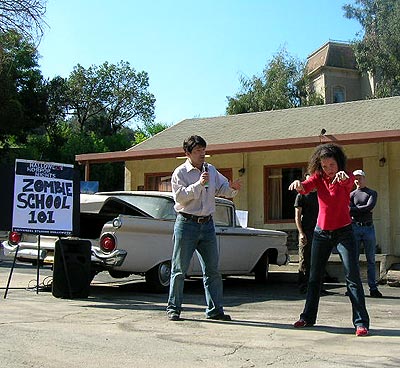 But, of course, since this is a theme park (come on, everyone, say it with me!) SOMETHING GOES TERRIBLY WRONG! 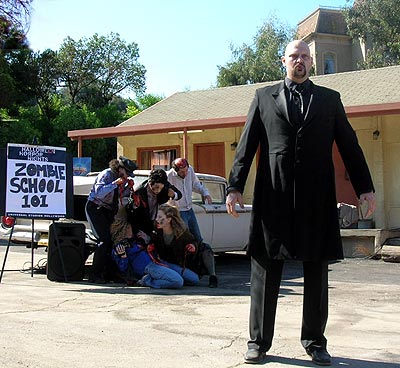 "The Director," a horror film auteur that Universal's backstory has as banned from its backlot for his "warped vision," lead a collection of real fake (or is it fake real?) zombies to do in the poseurs. Expect to see The Director's work all over the backlot at USH's HHN, as guests will be allowed to leave the tour trams and wander the scare zones that will be set in the backlot, including ones at the Bates Motel and the War of the Worlds.

HHN follows a giant storyline in which one actor plays the main person for the entire night? Lucky him!

Melissa Faulkner
October 5, 2006 at 8:05 PM · I would LOVE to work in one of the parks during Halloween. I am pretty shy normally but think I could rock hiding behind makeup.