May 16, 2007, 9:32 PM · Members of the media and selected roller coaster enthusiasts were invited to Busch Gardens Europe to get a look at the first roller coaster to open at the Williamsburg, Virginia park since 1999. Donnie Mills, General Manager of BGE, introduced Griffon, the world’s tallest and first floorless “dive” coaster while riding the 205-foot-tall, 1,350-ton mythical beast. From his seat on the coaster, he described some of the unique features of this Bolliger and Mabillard (B&M) creation.

Griffon features uniquely designed coaster trains, with riders in three rows of ten seats. The rows are “stadium style” with the second and third rows successively higher to give every rider a great view of the action. Additionally, once the coaster prepares to leave the station, the cleverly designed flooring system retracts (much different than your standard floorless coaster), leaving nothing under riders’ feet but the rails, and for those lucky enough to select the three seats on each end of the rows, there’s nothing beneath your feet but the ground. 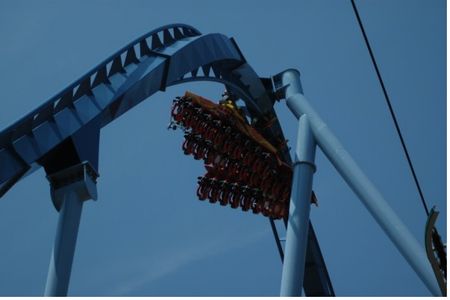 The 45-degree lift will give weary theme park goers a chance for a nap, with the combination of seat angle and lift angle creating a nearly horizontal riding position. Once at the top, thrill seekers will be treated to a panoramic view of the park from their 205-foot perch. Similar to other B&M dive coasters (Oblivion at Alton Towers, Diving Coaster G5 at Janfusun Fancyworld, and SkeiKra at Busch Gardens Africa) a chain drive takes the massive trains slowly over the edge of the first drop, allowing riders to ponder what they’ve gotten themselves into before plunging them down the 205-foot 90-degree drop. Now, it’s STRAIGHT DOWN, and there are very few rides in the world that give the same sensations that can be experienced on Griffon.

After that jaw-dropping first drop, most thrill seekers would be more than satisfied, but Griffon has even more to offer. A 75 MPH trip under a viewing bridge leads into a monstrous Immelmann loop. Then comes a very subtle dip that gives back row riders a dose of positive g’s that will have them pinned in their seats. A set of brakes slows the train before dropping riders down a second 130-foot second drop towards the legendary Loch Ness Monster, and through a second Immelmann loop over the Rhine River. The ride is still not done, with a surprising shot of air before a splashdown and 360-degree turn brings the train back to the station.

So, is Griffon everything that it’s cracked up to be? I have never ridden Oblivion or G5, but comparing my experience on SkeiKra a year and a half ago to Griffon, I have to say Griffon is a pretty dramatic improvement on Busch Entertainment’s other dive coaster. Clearly Busch thinks so too – they are installing floorless trains on SheiKra, which will debut next month. Not only do the floorless trains of Griffon add a dramatic new element to the ride experience, but the subtle design of the drops, inversions, turns, and dips give a significantly more forceful ride than I remember of SheiKra. The dip after the first Immelmann and the hump after the second Immelmann appear to be very small elements compared to the massive drops and inversions, but those two seemingly small features are incredibly powerful ones that pin riders into their seats and lift them out, respectively. The floorless trains really give front row and the outer three seats of the second and third rows a sense of freedom and flying difficult to find anywhere else on the planet. While most coasters have 2 or 4 seats with unobstructed views, Griffon has 22 (10 in the front row and the 6 outer seats on the back two rows), meaning that a bad seat on this coaster is pretty difficult to come by. Also, guests that normally get relegated to rows 4 or 5 because of larger chest sizes or height are given specially designed seats in ALL 3 rows. Finally, the splashdown section keeps riders mostly dry while giving kids, who may not be quite tall enough to tackle Griffon, a chance to participate in the thrill that the coaster provides.

No coaster is perfect, and Griffon is no exception. Firstly, the height, 205-feet, is not a dramatic increase over SheiKra (200 feet tall), and the first part of Griffon is very similar to its older sister. Also, the second drop, while dramatically situated near the Loch Ness Monster, does not offer the same effect as SheiKra’s second drop through the tower. The only other major criticism of this coaster would be that the second Immelmann turns riders in the same direction as the first Immelmann. Turning the other direction or including a different type of inversion would have given Griffon a nearly perfect layout and place the coaster in a category that would be difficult to match anywhere in the world. Griffon is also lacking slightly in theming. The station, with its timber framing and wrought-iron fixtures blends in well with the surrounding France section of the park, but very little theming extends onto the ride itself. Aside from the architecturally interesting viewing bridge, the coaster track does not interact with any significantly themed elements. The splashdown pool has a few lampposts, but they are not as well-integrated as one would expect from Busch Gardens.

Negatives aside, Griffon is still an amazing coaster that has radically altered the coaster landscape. It, along with Maverick at Cedar Point (assuming it is actually able to open in 2007), is the premier addition to the U.S. coaster collection, and it will certainly not disappoint anyone making a pilgrimage to Busch Garden Europe this summer. With an immense floorless train, two massive drops, two inversions, a dramatic water effect, and some surprisingly intense subtle elements, Griffon will quickly establish itself as a top roller coaster. Those who just can't wait until May 25, 2007 to ride Griffon, BGE announced that the park will be opening the coaster to park guests on May 18, 2007, a week ahead of the official Grand Opening.

Outstanding job Russell! Thank you for being there for us!

Excellent detial Russell, I can tell you've worked hard to get that info. Great job!

I do have to say that after watching that video, Griffon doesn't seem as spectacular as the hype has been. Probably totally different after you've ridden it which hopefully I'll get the chance to this summer.

awesome and excellent job with the video

It was a great coaster, and the people at BGE were awesome. It was great to meet you Russell. The vids they did were awesome.

Very well done, the vid especially - great job getting BGE to provide on-ride footage from the bolt-on camera and from off-ride as well! I can't wait for BGA's floorless cars...