June 25, 2008, 5:08 PM · ORLANDO -- We're in Orlando this week, spending some time at Universal as we visit family. (Note to self: Never, ever book at trip on United Airlines again.) The kids enjoyed their first trip on The Simpsons Ride, and my daughter discovered that she's actually quite good at blasting aliens.

On our way from Universal Studios Florida yesterday to a good soaking at Islands of Adventure, we decided to try lunch somewhere we hadn't eaten before. So that's what brought us into NBA City at CityWalk. 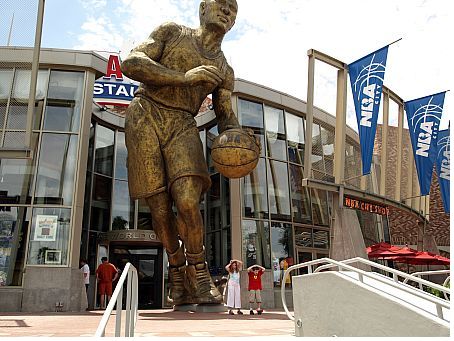 NBA City sticks to the well-worn theme restaurant game plan. You walk past the gift shop and hoops-themed arcade on your way into the dining room, which stands on a parquet, hardwood floor (of course), ringed with TV sets, from scoreboard-sized to standard hi-def flat screens. The waiter brings you menus, bound in basketball-style pebbled leather as the kids get to work on their paper placemats, matching NBA team names with their cities. ("Ugh, Charlotte is Bobcats now, not Hornets....")

Much to my dismay, the kids both opted for the "Pistons Pizza," despite their mother's campaigning for the "Denver Nuggets" (best kids' menu entree name ever, BTW) and mine for the "Pacer Pasta."

Laurie chose the garlic grilled chicken with sauteed spinach and mushrooms served over pasta in a bleu cheese sauce. ("Served at the 2001 NBA All-Star Game!") 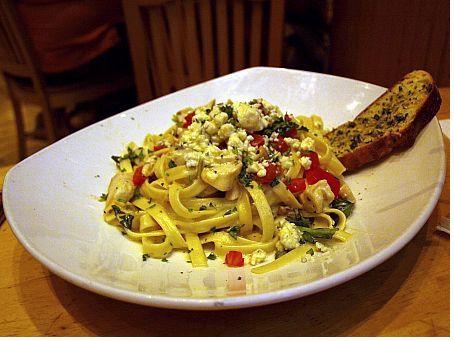 And, following our waiter's suggestion, I opted for the grilled salmon with roasted red pepper pesto, served over bowtie pasta in roasted garlic sauce, with diced tomatoes. 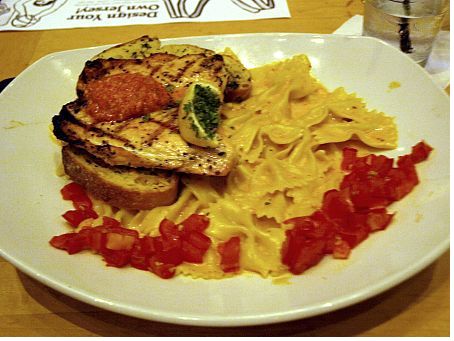 A couple bites of Laurie's entree was more than enough for me. I found the bleu cheese overwhelming, but my bleu-cheese-freak wife enjoyed it. The salmon, on the other hand, hit the spot and I polished the plate. It was one of those dishes that I will find myself craving later, leading to a ham-handed attempt to recreate it at home.

As the for the pizzas, the kids finished them, which is not something they always do with kids' meal pizzas. So consider that a strong endorsement.

Overall, we found the food at NBA City well worth a special visit -- tasty and satisfying while leaving you feeling well-nourished, instead of weighed down and stuffed. There are plenty of "sports bar" options available, but why opt for the same fried and cheese-laden meals you can find anywhere when better options await you on the menu?

As good a the food was, my son Brian suggested the real highlight was the bathrooms. ("NBA" for the men; "WNBA" for the ladies.) Who hasn't played "Pop-A-Shot" with the paper towel after washing up? NBA City fulfills that fantasy, with NBA-style rims and nets mounted over the waste-baskets. Nice touch.

steve lee
June 25, 2008 at 6:47 PM · I agree whole-heartedly, Robert. Despite getting little attention (I guess due to the basketball nature), NBA City is one of the best restaurants in Citiwalk. We went there on a lark (I hate basketball) and ended up being very pleasantly surprised by how good everything was...

Did you get dessert, Robert?

We tried two different desserts when we went to NBA City, both based on our waiter's recommendation: one was a lightly fried cheesecake (I want to say it was called Towering Cheesecake, or something like that), and one was fresh strawberries fried in a light tempura batter then rolled in cinnamon (Cinnamon Strawberries, I think they were called).

Man, they were AWESOME desserts. If you did not get at least one of those two desserts, stop back by NBA City some night just for dessert and enjoy. You will not be disappointed.

Despite my low expectations when we booked with them for our recent Orlando trip (earlier this month), they totally managed to exceed all crappy expectations I had in place. Firstly, we gt delayed in Washington on our return for 72 hours. (Bear in mind that about 5 direct flights - and many more via a connection - leave to London ever day.) Then, they decide that we'd be much better off flying over to Denver to make the connection to London. (Which we obviously refuse, and end up getting a direct flight sorted out.) Then, they lose ourbag. (It actually ended up making the trip to Denver without us, somehow. Isn't that a bit of a safety issue, sending a bag without its owner?) Then, when the bag finally arrives back home, it looks like a disgruntled employee took out their anger over crappy wages on it. With a carving knife.

So yeah, overall not fantastic. And ditto - the last time I'll ever take United. But yay for some NBA City love!