June 27, 2014, 9:44 PM · The public gets its first in-person look at the Wizarding World of Harry Potter - Diagon Alley on Sunday, when Universal Orlando hotel guests who've bought the Diagon Alley vacation package get into the new land. According to emails being sent to those visitors, they will have assigned access times to Diagon Alley. Will other visitors be able to get in? We don't know yet, however, experience suggests that Universal won't let day guests into Diagon Alley until it is certain that it can accommodate its hotel guests first. Diagon Alley opens officially to all on July 8. For everyone else, NBCUniversal is offering another tease of Diagon Alley with an hour-long, prime-time "making of" special on NBC, airing 8pm on Monday. Don't want to wait for the TV show? Theme Park Insider's been on top of all the Diagon Alley news for more than two years, and we were one of the few publications to get a complete, uninterrupted ride on the new Harry Potter and the Escape from Gringotts attraction. Read (and watch!) all of our Diagon Alley and Hogwarts Express coverage from last week's media preview:

Parkscope found some interesting public documents detailing plans for the fifth hotel at Universal Orlando. We then went digging on the Orange County Comptroller website (search for "Universal City Development Partners" then go to the "Last" records returned), and found a more recent document with additional details [PDF - 149 pages].

Here are two drawings from the document that show the location of the new hotel, as well as its new shared parking lot with the meeting facilities at the Royal Pacific. By the way, if you didn't catch Ben Mills' coverage of the press preview of the new Ratatouille-themed ride and restaurant at the Disneyland Paris Resort, take a few moments and reward yourself by catching up. Theme Park Insider was one of the few U.S.-based theme park websites to have a writer on-site at the Walt Disney Studios Park for the event, and Ben really came through for us with some outstanding coverage, photos, and video: Finally, Walt Disney World is offering two new VIP tours, for $299 per person. "The Ultimate Day of Thrills" and "The Ultimate Day for Young Families" each lasts 6-7 hours and includes a table-service meal and access to selected attractions at the Magic Kingdom, Disney's Hollywood Studios and Disney's Animal Kingdom. You can compare these tours with the other guided tours at Disney World to find if it's the best option for you and your family. These new tours aren't listed yet on that page, so you'll need to call +1-407-WDW-TOUR to book, if you're interested.

Gabriel Schroll
June 27, 2014 at 11:10 PM · I won't be reviewing the actual Universal hotels document, but I did visit the other site and it seems as if the fifth hotel is going to be a step up from Cabana Bay, but not on par with Royal Pacific, as it won't include Express Pass, but it will include water taxi service, which I think is absolutely fantastic! I think the transportation options via boat are one of the strongest draws of the on-site hotels.

As much as I'm pulling and wishing for a third gate, I am almost as excited for the new hotels, as Loew's (I always want to write Lowe's) and Universal have really done an excellent job with all of their resorts thus far. I don't see them letting us down any time soon, as they're fully aware they've raised the bar.

I commented on Ben's Ratatouille articles because that is likely to be the first Disney park outside the U.S I'll go to, and it has the best looking castle of any of them. Thanks to TPI, I know what to expect too, and can prepare accordingly. :)

Robert Niles
June 27, 2014 at 11:28 PM · I think that saying the fifth hotel will be connected to the parks by the water taxi is a bit of a stretch. From what I see on the documents, there will be a pathway to walk over to the Royal Pacific's water taxi dock. That's it.

The fifth hotel appears to have interior hallways, which I do consider a step up from the Cabana Bay's motel-like exterior doors. But there's no Universal Express, so it will need to be a step down in price from the Royal Pacific.

N B
June 28, 2014 at 2:05 AM · The 2007 drawing I have shows the Cabana Bay and the fifth hotel both connected via waterway, but the final layout of the Cabana Bay when viewed on Google Earth doesn't allow for the water taxi. 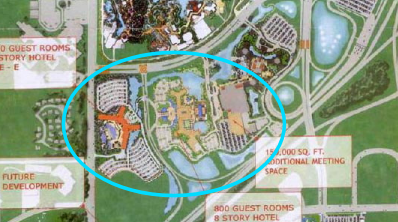 Gabriel Schroll
June 28, 2014 at 6:36 AM · Too bad about the water taxi. But I imagine the original waterway was man-made, so is it such a stretch to think Universal isn't willing to extend the waterway to accommodate a new hotel? I suppose they'd have to drain the lagoon for that, and that would be a big eye sore. MK visitors are used to eye sores though. :P

Whatever happens, I have faith in the people at Universal Creative that they know what they're doing. And when it comes down to it, I wouldn't think they'll add any additional luxury level hotels, as three is likely sufficient at that price point. And nothing short of a luxury hotel should expect water taxi service. Just another reason to keep the guests dropping the big bucks at Royal Pacific, Hard Rock, and Portofino.

I'd also be surprised if there were any Harry Potter-themed hotels. It would probably be gangbusters if they could build it behind the Hogwarts Express, or elsewhere connected to one of the HP lands, providing a second entrance to one of the parks, similar to EPCOT's World Showcase. But my guess is that they need to keep any available land in that part of their property free for any possible park expansions or a third gate. Putting a hotel there would almost guarantee they won't open a third gate.

I think Universal does a great job of theming, and I can't wait to see the plans and renderings for anything they do, hotel-wise or inside the park.

Diagon Alley seems to be an "inside the park" home run. Lmao.

Court E
June 28, 2014 at 11:07 AM · Universal could fit a water canal to Cabana Bay easily looking at it from Google Earth. The cost to do so for a "taxi" service might not be deemed worth the extra cost.

Being able to walk back to your resort beats a Disney bus any day of the week though.

Robert Niles
June 28, 2014 at 12:01 PM · The addition of a second hotel next to the Cabana Bay (which might also be expanded by several hundred rooms) should help to explain why Universal's building such as substantial walkway to the Cabana Bay, including a bridge overpass above Adventure Way.

BTW, I'm not saying that there won't ultimately be an expansion of the resort waterway. It's just that I'm not seeing it included in the document drawings in the filing I linked. And that's definitely the sort of thing that would need to be permitted before it happens.

Rob Pastor
June 28, 2014 at 2:19 PM · The Royal Pacific water taxi boarding area is a short walk from the new hotel. Also, one of the Parkscope guys, writing on OU thought the one area on the map was a connector area or bridge allowing quick access to the water taxi dock, so he surmised that the service would be available. It's also possible that Universal could add an additional dock closer to the new hotel since the lagoon almost abuts the new building. So I think the water taxi isn't really out of the equation at this point.

I think Universal knows if you keep people on property, they have less tendency to visit other parks. When my wife wants to visit Sea World (skipping it this year), we pack up the rental, drive to that god awful parking lot, walk 3 blocks to the main gate and are exhausted by 4-5 PM.

Yes, the tickets are free with our vacation package, but it seems like a road trip to me. We always grab some dinner on the way back, go back to our room and freshen up, then hit IOA or the Studios that same night.

Portofino and Cabana are just far away enough to make walking a bit of a chore, but the new bridge should make things very easy.

This is just the next level in the evolution of UOR. My fear is DA and all these new additions will make the parks swell in attendance. The one thing I really despise about the Disney parks. 300 minute waits for meet & greets... ugh.

173.66.194.150
June 29, 2014 at 5:39 AM · I wonder about the impact of these no universal pass hotels on the purchases of daily universal passes. Are those being snapped up at a faster rate with hotel guests? Or will they more when these other hotels come online? So that daytrippers may have little or no chance of buying these?

I spoke with someone who looked into staying at the cheaper CB and buying tickets with the universal pass added. It was more expensive than staying at RP (obviously by design). But it would be nice to be able to stay in a bigger space (CB suites) and still have the Uni Pass.

Anyway, I wondered if there were any stats on the impact of CB on the purchases on the add-on Uni Pass.

Anon Mouse
June 29, 2014 at 9:56 AM · "•Loews, Universal's hotel partner, is explicitly barred from selling to Disney or anyone else operating theme parks in Florida or Southern California"

Robert Niles
June 29, 2014 at 6:27 PM · It's a defense against a competing company getting control of the UOR hotels through buying Loews. If such an acquisition were to happen, it would terminate the management deal, and UOR could turn over the hotels to another partner.