Thematically, it doesn't seem like an obvious fit for a family (or, rather, let's say "family-accessible") ride, a category borne out by its 1.2m minimum height restriction. Despite not being based on the famous 1973 horror film, it's the connection most adults are likely to make. And yet, through a mixture of ingenious ride design and a well-executed narrative package, it works a treat. 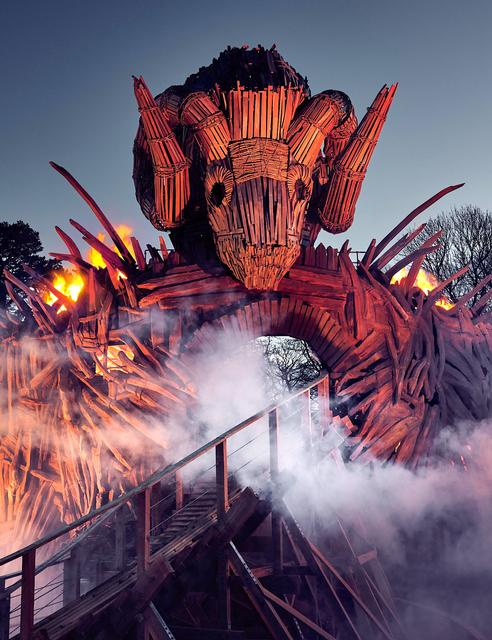 We're guided through the experience by the Beornen, a pagan community residing in the woodlands around Alton Towers whose wellbeing depends on a ritual ceremony, initiated by a gift to their deity of “the chosen few” who will pass through the flames of an effigy. A role which is, in typical theme park fashion, accidentally taken by us by stubbornly refusing to leave the line.

(And given the various battles the park has had with their neighbours over the years, perhaps this outcome is no great narrative leap, anyway.)

It's far from the first time the park has called on (or created) its own local mythology for attraction narratives; Hex and Th13teen being two other notable examples. But the history and landscape of the area so inexorably wraps Alton Towers that choosing to embrace it makes for experiences that feel like a genuine part of the park's fabric – creating, in a sense, a more sincere kind of theme park than one simply structured around the notion of brand depositories.

Before we even get to the ride, wicker sculptures draw us in from the surrounding area – and the Beornen have taken over the nearby pub, transforming it into 'The Welcom-Inn.' (My heart broke a little when I realised they'd missed out on the possibility of 'Icumen Inn,' though that's maybe a niche Wicker Man reference too far.)

After a queue line that wraps around the structure of the ride, there's a pretty simple pre-show room to kick things off, introducing the narrative conceit of the attraction. Of itself, this moment isn't especially remarkable, using some basic projection mapping and odours to engage the senses. But it does enough to give context to the experience we're about to be thrust into.

Which brings me to the only aspect of the attraction that really jarred for me. Upon entry to the station, we find a train unloading its previous batch of passengers, ready for us. Although the narrative goes that our role is simply to pass through the flames – rather than succumb to them – there's an inherent, thrilling danger to this interaction with the elements. After all the hype, it somewhat diminishes the conceit to see a batch of riders safely and calmly returned ahead of us.

(I know, I know; it's such a minor gripe for something that would incur a hefty hit to the construction budget. But after such good and committed work had been done to imaginatively engage us in the premise, I really longed for a separate exit platform to allow the trains to be waiting for us empty.)

That aside – on to the ride. In many respects, it's a typical Alton Towers roller coaster, packing more of a punch than most rides so low to the ground would manage. The park has always struggled with the restrictions imposed by the surrounding communities, but rides such as Nemesis and Air (now Galactica) have made a virtue of this by making interactions with the landscape an integral part of their designs. Wicker Man is no different; a successor to those that have come before it. 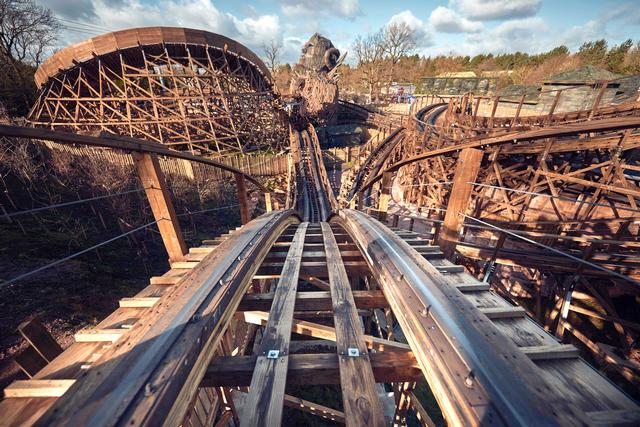 It whips round corners, shoots up tunnels and hurtles past its own structure in ways that surprised me even on a fifth or sixth ride, offering everything you want from a GCI build. And then, of course, there is the incredible weenie at its heart: the six-story Wicker Man structure that it flies through three times during the ride, each time accompanied by fire, smoke and video effects that are an absolute delight.

Having only experienced the ride at night, I can't say how effective these effects will be during the daylight hours in which most riders will see them. But the shape of track itself so artfully intersects with the structure at these points that they really serve as a 'plus' to an already thrilling bit of ride design – so I applaud the park for choosing to invest in them all the same.

It isn't the longest ride – lasting around two minutes, including the lift hill – but nonetheless feels like a complete experience. It's perfectly pitched at a level designed to be accessible to the pre-teen crowd while still giving a thrill to adult audiences. Even if members of your party choose not to ride, the park have done an excellent job of creating absolute theatre simply from the sidelines – the combination of the ride and its surrounding sensory elements creates a dynamic environment.

It's been a twenty-something year wait, but #WickerMan is a mini-masterpiece that earns its place at the centre of the park. pic.twitter.com/UiZS7oLfD5

And that concept is inherent in every element of its design. In keeping with the rituals of the Wicker Man, this is a ride that riffs on both harmony and counterpoint to its natural environment – hurtling toward the ground in one moment before running along its contours in the next; building, shaking and burning its core material.

We're so used to seeing roller coasters designed in isolation from their environments then given a generic branding – it's a real joy to see one where each design choice draws from and develops an artistic statement. It's been a twenty-something year wait, but this is a mini-masterpiece that earns its place at the centre of the park.

Wicker Man sounds like a very fun ride. Appreciate your details on the story behind the ride as well as the review of the ride itself. Getting the extra detail on the backstory is part and parcel of the purpose for Theme Park Insider.

Having just returned from several days at Silver Dollar City experiencing their new Time Traveler coaster, I too have a great appreciation for ride designers who meld their coasters to match the landscape of the park. More designers should follow suit, because utilizing the landscape of the park can lead to some very unique ride experiences. It sounds like Wicker Man follows this trend and is a unique, one of a kind coaster because of it. Kudos to Alton Towers for being smart - and kudos to you for a well written and presented review.

Ben, did they provide you with an onride video you can share, by any chance?

The park was not allowing any media to do on-ride videos during the media event tonight.

I still say the theme is in very bad taste, but the execution looks really good. And I have a soft spot for wooden coasters, which are rarely built nowadays.

Terrific report, Ben! You always make writing good, interesting articles look so easy- I know it's not. Thanks for taking us for a ride on Wicker Man- it's probably the closest I'll ever get to riding it myself.

That looks soooo cool! And I just love the guts of using fire effects on a wooden roller coaster :-)

Thanks lads - I'm simply inspired to hit the standards you set with your own pieces!

JR, you hit the nail on the head - it's the symbiotic relationship between ride and place that elevates Wicker Man from "simply" a good coaster to something a little more special. AJ talked some time ago about some rollercoasters in Europe that were a high standard, but ultimately fairly generic - and if they're of essentially the same variety as ones in parks closer to his home, why should he make the effort to visit them in particular? Attractions like Wicker Man are very much the answer to that - it simply couldn't exist in many other parks. (And certainly wouldn't work have the same resonance if it did.)

The fire is honestly not as noticeable a feature when you're actually on the ride as the marketing has made it out to be - the interaction is more with projection and smoke. But the quality of that is so high, it's no great issue.

As for the lack of POV videos... yeah, it's a shame. We had a snowstorm here today that meant none of the park's rollercoasters (including Wicker Man) could open - a halt that'll likely continue through to Monday. So I suspect we'll start to see videos popping up early this week. I'm curious to get a sense of how it is during daylight - my impression was that it would be a very different experience to a ride in the dark.

Looks really good and am looking forward to ride it later in April, but I just feel like it's lacking something. Especially as rumours before the opening suggested it was going to have a magnetic launch. However, I will have to wait to give a proper opinion on it until I have ridden it. Great report.

I don't know Ben, a family coaster themed around human sacrifice? That's enough for me to say bad idea. The park restrictions forced a low, slow family coaster resulting in a 3'11" height restriction, that's like a 10 year old child. I know they need a broad appeal theme but couldn't they come up with something better than human sacrifice? The fire, smoke and "pile of garbage" you ride through are entertaining gimmicks, but the coaster itself is boring. Are there other park rides in the world that tell 10 year old children they are about to be killed?

Made a few changes to the article just now - in my original version of this article, I stated that the ride was partially based on the 1973 film of the same name. In fact, while it shares many of the themes, it is not based on the film. The story for the ride was created solely by the Merlin creative team, based on local folklore. Apologies for the mistake.

Great review, can't wait to ride it soon. Looks like a great new family friendly addition to the park which still adds a level of thrill. However I am slightly disappointed that this coaster doesn't have a worlds first element about it (I'm not counting the first ride to blend wood and fire because that's just a gimmic), would have been nice to see a launch lift hill like the rumours first suggested. The theming looks really impressive and an overall very good addition to the resort which will hopefully boost attendance.
P.s- still sad that the flume is gone

Excellent review, Ben! I may get back to Alton Towers to ride it although Thorpe Park, which I've never visited, takes priority.

@Robert Niles - No surprise about the park not allowing on-ride videos on media day! As much as I love Alton Towers, I must say that their media department is the absolute worst! I contacted them repeatedly prior to my visit to AT last year, explaining that I write for TPI and hoping that they would offer me some hospitality. I never got a response - not even when I asked for permission to take a GoPro on a ride. Probably should have tried to take the camera on the ride and let a ride op stop me, as that might have been the only way to get the park's attention.

Looking forward to trying this in the summer.