Disneyland is transforming the pier part of the former Paradise Pier land in Disney California Adventure into Pixar Pier, opening June 23. One of the locations getting a retheme is the old soft-serve ice cream window in between the former Cove Bar and the roller coaster. It's now the theme park home of the Abominable Snowman from Monsters, Inc.

Except that the big guy wants to be known now as the Adorable Snowman. And he'd really like you to try his yellow frozen treats... which he swears are lemon! (If you're staring blankly, it's a joke in the film.)

The dairy-free lemon soft serve joins the menu along with vanilla and chocolate soft serve. The new signature items at the walk-up stand are a "Pixar Pier Parfait," with the lemon soft serve and blue raspberry frozen beverage, plus "It's Snow-Capped Lemon," a lemon sift serve cone, topped with a "snow cap" of white chocolate. 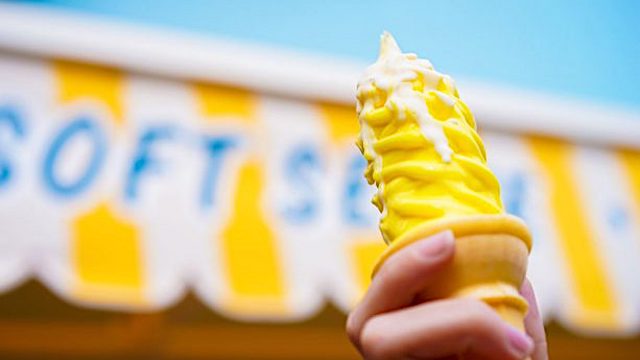 But, wait a minute... something seems not quite right about this, having watched the film several times. What is it? Oh yeah, Matthew Gottula nails it.

Disney is all in the details, their commitment to #story is unparalleled, no one else can do what Disney does best (except the whole gag in the film was built around snow cones, not soft serve) https://t.co/rYJQ9Wvxlo

I'm in Orlando this week, and we didn't get to taste the lemon soft serve during the media preview for Pixar Pier, but I suspect it's pretty good (think... lemon Dole Whip), even if it isn't the lemon shave ice (over vanilla soft serve!) that it really ought to be. Anyone tried it yet?

And you know what they tell you not to do with yellow snow...

The Lemon Soft Serve from Adorable Snow Man Frosted Treats is a big winner. This is going to be a huge hit. #PixarPier

Universal Orlando gets its Voodoo (Doughnut) on