Disney adds a coaster to its Hong Kong 'Frozen' plans

May 31, 2018, 5:56 PM · Disney Parks and Resorts today released an updated concept image for its new Frozen-themed land at Hong Kong Disneyland, and it gives us our first look at what promises to the be highlight attraction in the park's kingdom of Arendelle.

Disney announced two years ago that it would invest in a US$1.4 billion expansion of the Hong Kong Disneyland park, which saw a double-digit percentage drop in attendance in 2016, which is when Shanghai Disneyland opened. The Hong Park recovered to post a small gain in attendance last year, but it remains Disney's second-least popular theme park, attracting just one million visitors a year more than Walt Disney Studios Park in Paris.

(Of course, only in Disney's world can one million visitors be modified as "just one million.") 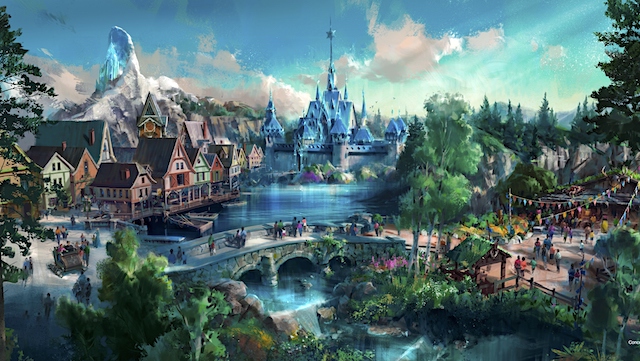 And here is today's update: 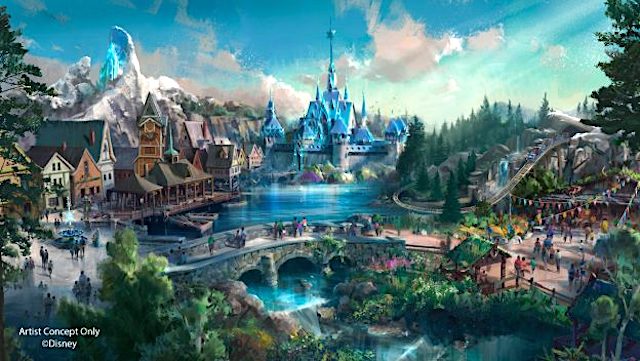 Notice the difference? Look at the right side of the image. That's right. It's a coaster!

Whether this is a Seven Dwarfs Mine Train-type experience or merely the outdoor section of a powered track ride such as Radiator Springs Racers remains to be seen. Heck, pretty much everything remains to be seen about Disney's plans to bring one of its most lucrative and beloved recent animated franchises to life.

The original announcement included the promise of two new attractions and concept art for a trackless "dancing sleigh" ride — a Frozen version of Luigi's Rollickin' Roadsters, if you will. But we didn't know what the second attraction would be... until now. Well, whatever it is.

Disney's original timeline for the expansion had the Frozen land opening in 2020. However, today's announcement includes no mention of opening dates for anything in the project, including the upcoming Ant-Man and the Wasp makeover of the former Buzz Lightyear shooter ride, which had been tipped to open sometime this year, or the rest of the Marvel-themed land that will include what is now part of the park's Tomorrowland. Disney also is expanding the park's Sleeping Beauty Castle, more than doubling its height.

this looks so amazing..i wish there was a frozen coaster in WDW along with the boat ride!!!

This looks amazing. Why doesn't WDW get this instead of the lame Norway butchering.

I like the implication that the Arendelle castle can be entered and a bit explore but Elsa's ice castle is inaccessible. I think being out of reach makes it a bit "magical" and gives greater impact to any attractions that bring your closer to it. Neat!

The first thing I noticed was the new mountain to the left of Elsa’s castle. Looks more like the Matterhorn to me. A second coaster? Here’s hoping!
Upper left hand corner for the win, Robert.

The distance makes it unlikely it's connected to the larger mountain and seems a short coaster like Mine Train. But it's still a good addition to boost the entire section up more and another reason to check out HKDL.

Wasn't there a fast paced sled sequence with the deer in the movie w? If so, that could be a cool theme for the coaster.

It does not sound like "innovation" to me. Apart from good (theme excelling) landscaping, Disney is still pulling out dull off-the-shelf ride concepts, with a theming sauce poured over it. That's not how excellence in storytelling should be done.
So, sorry, but nothing amazing at all in the actual news...

Walt Disney World opens its Minnie Vans to everyone